'He is a man whose utterances have been so virulent and communalistic.'
'That's why many people did not look at him as the party's choice for chief minister.'
'UP is the state that reports the largest number of communal incidents every year.'
'Modi may not be using the Hindutva card, but he never condemns the incidents too.' 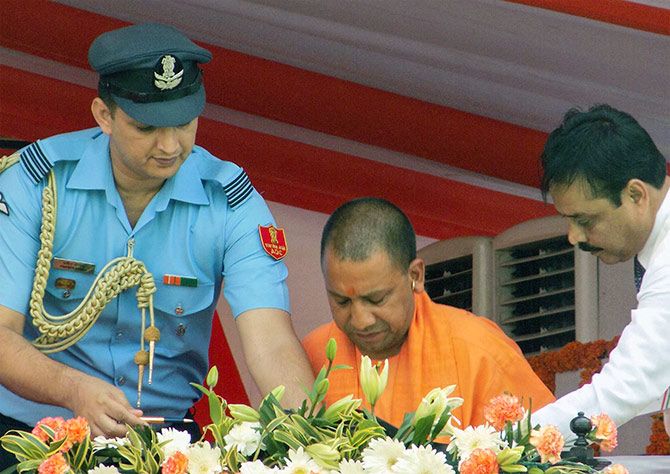 B R P Bhaskar, the veteran political observer, has been writing about Uttar Pradesh since the 1950s.

What was your reaction after the UP election results?

It was how we reached the present state of the communal kind of tenor in politics as a whole.

It's not the BJP alone that is doing it. To counter the BJP, the Congress has been using a soft Hindu platform. It was started by Rajiv Gandhi.

Let me go back to the very first election independent India had.

In the 1952 election, in a place called Ambala -- in Punjab then, now in Haryana -- the Congress candidate was a man called Gaffar Khan.

He was the only Muslim voter in the constituency. And he won the election.

In 1957 and 1962 also, he was the Congress candidate. This is something that can't happen today.

From that situation to today, what led to the divide between the two communities?

The divide was there then too, especially in Punjab.

Even when there was complete communal polarisation in the country, it did not affect politics.

It did not influence the voter.

And I give credit to Jawaharlal Nehru. He confronted communalism.

Then came Indira Gandhi who continued for some time. But she was a religious person unlike Nehru.

By the time Rajiv Gandhi came, the determination to stop communalism was totally gone.

Perhaps the later dynasts had the need to prove they were Hindus.

The moment the Congress leadership lost its guts to stand up to communalism, the BJP was able to grow. Did it shock you when the BJP chose Yogi Adityanath as UP chief minister?

The choice of chief minister did not come as a surprise to me though it was not a choice one expected.

At the same time, you can see that the party has chosen hardcore RSS men as chief ministers in all the state assemblies after the 2014 Lok Sabha win.

Though everybody knew that the Jan Sangh and BJP were political wings of the RSS, only during the 2014 election did the RSS commit itself fully to the party in an election and put tens and thousands of their cadres on election duty.

We saw the same involvement in all the assembly elections after that and the chief ministers chosen were hardcore RSS men.

Adityanath's choice came as a big surprise to even BJP supporters...

He is a man whose utterances have been so virulent and communalistic. That's why many people did not look at him as the party's choice for the chief minister's post.

Now that the distinction between organisation man and political man has totally blurred, from their point of view, it makes no difference.

When you set them in motion, you will not be able to control them anymore.

The vote in UP transcended the communal divide on previous occasions also.

You can say, it was the first flush of freedom.

After the Emergency also, it happened.

On these two occasions, there were two major things behind the sentiment of the people.

But nothing of that sort happened this time. Still the BJP won such a huge mandate.

You are right. This needs to be studied. Not electoral studies, but sociological studies are needed to understand the sentiment behind the results.

As a person who has been studying UP politics from the mid 1950s, what do you see as the reasons behind this landslide victory?

You have to go back to understand the situation.

When the Congress declined all over the country, the beneficiaries were different parties including the BJP.

Though the BJP benefitted first, its vote share went down steadily election after election, from 30% to 15%.

So, is the difference Narendra Modi?

Beyond Modi, there are factors at work. I feel that identity politics is losing its edge.

When the BJP came to power in 1991, they consciously projected Kalyan Singh as an OBC man and it worked.

What happens in identity politics -- especially in OBC and Dalit politics -- is you are not dealing with homogenous communities.

The result of OBC identity politics resulted in the dominance of Yadavs in both UP and Bihar. There are more than 200 OBCs in UP.

It is happening to Dravidian politics in Tamil Nadu too.

The BJP's strategy has been to break into that even before Modi came, and it was the same this time too.

Like the Brahmins dominated once, one community from the OBCs and Dalits started dominating the entire community.

I think it is not going to work anymore.

Does that mean caste will play less and less role in Indian politics?

I have always maintained that identity politics has a limited role in public activities.

You have certain disadvantages due to caste, so to that extent you are justified in articulating your needs.

But political power seeking is a different game.

Identity-based caste groups are floating political parties when main parties fail to do justice to them.

In the 1950s and the 1960s, I think the Congress and the Left failed to address their grievances and that's why identity politics came into existence.

Is it because the aspirations of other communities have gone up?
Do you think they look at Modi as the person who could help them realise their dreams?

It is a factor in urban pockets, but I am not too sure whether it is happening in a state like UP.

The polity may be fragmented, but the UP voter's mandate is for a single party in the last 10 years or so.

The first beneficiary was Mayawati, then the SP and now the BJP.

It looks as if a collective mind was at work to ensure that there was no hung assembly.

Indira Gandhi used the slogan garibi hatao in the early 1970s. Modi is using the same slogan in a different way now...

Personally, his concept of upliftment of the poor is a welcome thing because from what he says, he is going away from doling out things. The prosperity of the Scandinavian countries are all built on that concept.

Is that the reason why Modi and Amit Shah spoke of vikas during the elections and not Hindutva...

I don't think the role of Hindutva can be underestimated.

See, even in 2014, Modi did not use the Hindutva card. He talks about development. But at the ground level, the Sangh Parivar was pitching it all the time.

UP is the state that reports the largest number of communal incidents every year.

Modi may not be using the Hindutva card, but he never condemns the incidents too.

In politics, whether you believe in something or not, all politicians are after power and it is not a crime.

You are in politics to win elections and get power. What is important is the methods you employ to get into power.

Right now, I feel the BJP has a clever strategy which is working for them. But they will have to face the question whether they are able to deliver sooner or later.

Something that I see in media debates is they argue on the basis of facts. It is not just facts that determine, but perception.

Modi is perceived by people as the man who is capable of delivering. I would say Modi has a very favourable perception. 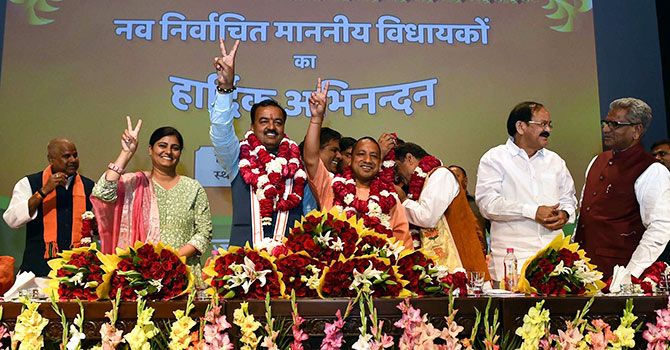 IMAGE: A joyous Adityanath after his election as leader of the BJP legislature party in UP. On his right are Keshav Prasad Maurya, the state BJP chief, who will serve as one of the state's deputy chief ministers, and Union Minister Anupriya Patel of the Apna Dal, a BJP ally.
On Adityanath's left, Union Minister M Venkaiah Naidu, one of the central observers for the BJPLP leader's election, speaks to O P Mathur, the powerful BJP leader. Photograph: Sandeep Pal

Now that you have a hardcore Hindutva man at the top in UP, what will happen to vikas now?

They have understood that the communal game is not doing any harm to them electorally.

If it is not an electoral problem, what is going to restrain them?

Earlier, when they tried the communal card, it created a negative impact. That was broken when Modi was brought in and he won the elections and was accepted nationally.

So the RSS now knows that it would not hurt them electorally.

Do you think behind the vikas mantra, there was the Hindutva card though the BJP vehemently denies this?

See, vikas is a mantra which appeals to a certain type of audience, like the urban middle class.

At the grass root level, they will continue to play the communal card as it appeals to a certain section.

But this also can be counter productive.

What they don't probably realise now, in the flush of the electoral victory, is that the communal card has its own limitations.

After the Babri Masjid was pulled down, they were not able to come back in UP itself.

It is not that you play the communal card and win all the way.

They think it will work, but if the Opposition can give them a strong challenge, they will not be able to.

It was widely reported that Manoj Sinha was Modi's choice for UP CM. Do you feel the RSS had an upper hand in the choice of chief minister?

Yes, this is an RSS decision.

The creation of the posts of two deputy chief ministers is to satisfy the supporters of the other two blocks.

While the RSS brought in their man, they found it necessary to appease the other sections.

We can see that this is a compromise where the RSS has the upper hand.

So you feel more than Modi, it is the RSS that has the voice?

Yes, the dominant voice is that of the RSS. 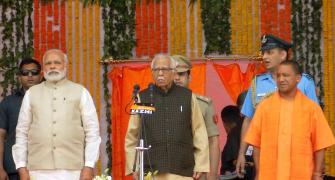