'What will work is not fear of the law, but of real and swift prosecution under the law.'
'That can now be a possibility thanks to the Supreme Court judgment.'
Illustration: Dominic Xavier/Rediff.com

Supreme Court Senior Advocate Colin Gonsalves, founder of the Human Rights Law Network, while welcoming the judgment, explains to Jyoti Punwani why he feels that a new law is unnecessary.

Do you think a new law against lynching is necessary?

No new law is necessary for the reason that provisions of the IPC (Indian Penal Code) already exist.

There are very comprehensive provisions not only on hate speech, but also on hate action.

So it's not as if lynchings are going on uncontrolled because of an absence of adequate laws. It's because of total non-implementation of existing laws.

The reason for this is that people enjoying political power and religious leaders have engaged fearlessly in hate speech.

A new law would have a limited impact.

Perhaps, instead of the punishments currently prescribed in the IPC for hate speech and hate action, there would be stricter punishments.

But lynching is murder, and the punishment for murder is life imprisonment. You can't have anything more than that.

The judgment says that a new law would 'instil a sense of fear for law amongst the people'.

What will work is not fear of the law, but of real and swift prosecution under the law. That can now be a possibility thanks to this judgment.

The Court has directed the appointment of a nodal officer in each state to head a special task force which will monitor individuals involved in spreading hate speech and fake news.

The nodal officer will have to take immediate action under criminal law -- file an FIR and register an offence. The judgment is very good in this respect.

So if Adityanath (Uttar Pradesh Chief Minister Ajay Singh Bisht) or any chief minister or any sadhvi says, for example, that those who eat beef should be hanged, the authorities will have to register an FIR.

I can foresee Adityanath becoming careful of what he says now.

But who will force the nodal officer to take action?

The courts will do it.

If anyone witnesses a hate crime, they will not have to go and file an FIR themselves, something they may be afraid of doing.

The onus is not on the individual now to prosecute.

For instance, if anyone sees Adityanath make a hate speech, the person can make copies of the speech and send it to the nodal officer, saying, here is his speech, please implement the law on hate speech.

If the officer does not act, one can go to the high court to force him to do so.

This judgment is an improvement on the existing situation. Because contempt of court can be invoked if the nodal officer does not take action. Also, the judgment prescribes disciplinary action against officers who fail to act.

So you think this judgment will help?

It seems to me that the court is hesitant to give an all-out judgment.

But despite the hesitancy, its language is quite firm. It will surely slow down the attacks.

But nothing will happen on its own. It will depend on us to make the judgment effective.

It requires people to be alert.

Everywhere these politicians go, somebody must take videos of what they say. These videos can then be used to prosecute. It will require people to file cases in court.

We will have to be specially alert in BJP-ruled states.

I think we will have to rely on our own resources everywhere.

The Congress is not going to file cases against the BJP.

It will be up to civil society to take steps against lynching and hate speech.

But the judgment helps in taking these steps. Therefore, I say it may not be an ideal judgment, but it is a good judgment. It is a first step.

Recently bail was granted to eight persons convicted for a Jharkhand lynching, because though the video of the incident showed them as part of the mob, they were not shown assaulting the victim. Do we need a new law to address this?

You don't need a new law because there already exists a law regarding common intent.

If you establish common intent, the person is as culpable as anyone else.

You must prove, for instance, that these eight persons came together from the same village, they chased you together.

So even if some of them did not do any overt act, if you show their involvement in the crowd, they can be convicted.

But this can't apply to bystanders. You can't have a law that says bystanders who just happen to be there are also part of the assaulting crowd.

What if the Centre uses this judgment to say that because the Supreme Court has directed us to draft a new law against lynching, we can't take any action against lynching mobs till that is done?

In my opinion, framing a new law is neither here nor there. It is not of any significance. Because the judgment directs the authorities to take action under existing IPC provisions (Sections 153A and other provisions).

There is a 2014 judgement (Pravasi Bhalai Sanghatan vs Union of India) in which the Supreme Court has analysed the law against hate speech and found it to be very comprehensive.

Our hate speech and hate action law is very well developed. So there is no way the Centre can say we can't do anything.

One report says that some provisions of the law may be changed to shift the onus of proof on the accused in mob lynching cases. That may be a good idea, don't you think?

I think that's dangerous, because it sort of puts the legal system upside down.

Currently, in cases of custodial death, the onus has been shifted on the accused. But there you are in the custody of a person. I'm not sure if mob lynching cases require this.

It could result in a lot of injustice.

Instead of a presumption of guilt against the accused, why not have a different presumption?

The problem with the lynching mobs getting away is one of interference by the political establishment, isn't it?

So, have a presumption that the prime minister and the chief minister are responsible. After all, these are your armies.

Instead of making the accused prove they are innocent, why not make an assumption about the lynch mobs? That they are acting in an unrestrained manner leads to a presumption of criminal conspiracy with their party leaders.

Don't play around with the law by turning the basic principle of 'innocent until proven guilty' upside down.

But even fixing the liability on the PM or CM will require a change in law.

I would certainly support a change in law that makes the assumption that the party leaders are responsible.

When the rank and file acts repeatedly in a particular manner, they are doing so as part of a criminal conspiracy. I am not talking of isolated instances.

Where there is a pattern of members of one party indulging openly in these acts of violence, you can definitely fix liability on their party leaders.

Let the CM of Rajasthan where so many lynchings have taken place, be also assumed to be responsible.

I would support a change in the law that makes this presumption. 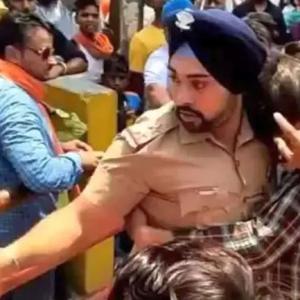 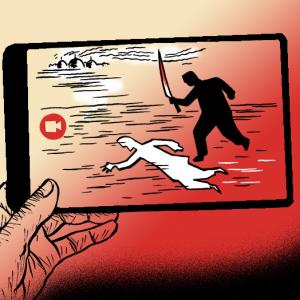