Job creation was mentioned 13 times in the BJP's 2014 election manifesto, yoga only twice. My 11-year-old daughter has done yoga for the past year or so. As she does her asanas, I never thought of asking her what she was doing with her body, what this breathing thing she was doing was.

I knew of yoga as an ancient Indian practice to be healthy and keep fit, but it did not concern a lazy chap like me obsessed with good food and acquiring a 56-inch waistline rather than a 'chappan inch ki chaati,' like you know who.

Some two weeks ago, everything about yoga changed for me. After the Modi government decided to celebrate the United Nations's International Yoga Day on June 21, I willy-nilly was drawn into the politics of yoga.

The Maharashtra government under its learned Education Minister Vinod Tawde on June 1 issued a diktat that all schools in the state will stay open on Sunday, June 21, for students to do yoga between 7 am and 8 am.

Muslim clerics, never slow to spot a headline-grabbing opportunity, jumped in to denounce the move, adding their customary heft by arguing that the Surya Namaskar was anti-Islam. A Muslim can only bow before Allah, the mullahs declared.

This, when 47 member-nations of the Organisation of Islamic Countries said yes to celebrating Yoga Day.

Many Muslim clerics also argued that it was not right for Muslims students to do yoga on June 21 as Ramzan would be on; some Christian priests objected to the move as they felt the morning yoga would clash with mass.

As is usual with the BJP when under pressure, the Maharashtra government buckled down and withdrew the diktat after they discovered the issue had somehow become a Hindu-Muslim tangle.

The controversy over Yoga Day has refused to die down, the latest salvo being over the Surya Namaskar. The usual suspects said it was anti-Islam, another usual suspect retorted that those who cannot worship the sun can drown themselves in the sea.

Keep calm and do yoga, I wanted to tell my countrymen.

I tried to discover more about the Surya Namaskar and Google directed me to the Art of Living site. The Surya Namaskar, AoL told me, was a set of 12 asanas that provide a good cardiovascular workout. Literally translated as a salutation to the sun, these postures are a good way to keep the body in shape and the mind calm and healthy. Surya Namaskar is best done early morning on an empty stomach, I learnt.

Was Surya Namaskar anti-Islam or not? I was none the wiser. Then the Modi government dropped Surya Namaskar from the International Yoga Day celebrations. So, the Modi Sarkar -- like the predecessor it pilloried for precisely this -- was indulging in Muslim appeasement.

Weary of researching yoga, I picked up the late Abraham Eraly's Emperors of The Peacock Throne: The Saga of The Great Mughals.

While reading Eraly's book, I came across this wonderful point about Shahenshah Jalaluddin, the Mughal emperor we know as Akbar the Great.

According to Mullah Abd-ul-Qadir Bada'uni, a chronicler from Akbar's times, Raja Birbal was a major influence on Akbar. Birbal, Badauni bitterly complained, 'persuaded the emperor to worship the sun and fire, and venerate water, stones and trees and all natural objects, even down to cows and their dung.'

'The accursed Birbal,' Badauni noted, 'tried to persuade the emperor that since the sun gives light to all, and ripens all grain, fruits and products of the earth, and supports the life of mankind, therefore that luminary should be the object of worship and veneration.'

'Akbar also issued a number of dietary regulations seeking to restrict the consumption of beef -- on the ground that physicians held the flesh of cows to be productive of sundry kinds of sickness, and to be difficult of digestion,' Badauni is quoted as writing in Eraly's book.

'The slaughter of animals on Sunday was strictly prohibited, as the day was sacred to the sun,' Badauni wrote.

All this must be music to BJP ears I thought, recalling not with a little irony that Rajasthan Minister Vasudev Devnani, a BJPwallah, told the Indian Express (external link) in April that 'Akbar is not The Great, but just a ruler from outside.'

Only a salary hike, I replied, would bring me solace in these times of high inflation.

I then mentioned a friend who had been looking unsuccessfully for a job for months.

'Why don't you meet 'X,' a famous yoga guru, to find a job?' another friend told the Job-Seeker.

The Job-Seeker did, and when I met him three months later, looked visibly happy.

So meeting the yoga guru did land him a job?

No, he didn't still have a job, he said, but now he could breathe easy.

Oh yes, a jobless man can breathe easy, why ever not!

So all of us can breathe easy till 2019 because this government was not elected to create jobs, but to do yoga.

'The country has been dragged through 10 years of jobless growth by the Congress-led UPA government. Under the broader economic revival, the BJP will accord high priority to job creation and opportunities for entrepreneurship.'

On yoga the manifesto said, 'Yoga and Ayurveda are the gifts of ancient Indian civilisation to humanity and we will increase the public investment to promote yoga and AYUSH (ayurveda, yoga, unani, siddha and homoeopathy). We will start integrated courses for Indian system of medicine (ISM) and modern science and ayurgenomics. We will set up institutions and launch a vigorous programme to standardise and validate Ayurvedic medicines.'

In April a survey by the labour bureau noted: 'Job growth falls, down to lowest in three quarters (external link).

After seeing the importance of yoga vis-a-vis job creation under the Modi government, one can easily detect what the government's current priorities are.

If you don't believe me, please check the message board below for answers. 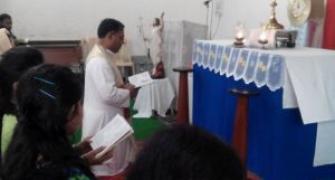 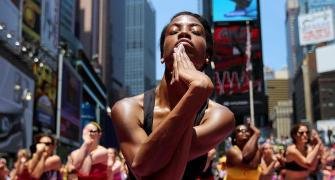 Bow down to India: UN to declare June 21 as World Yoga Day 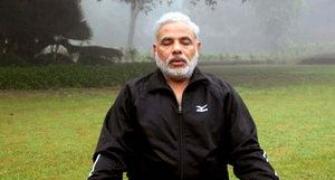 Dear Modi fans, PM will NOT be performing yoga on Rajpath 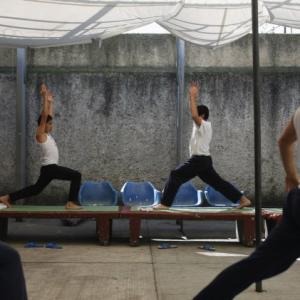 At Yoga Day event, Muslims can take name of Allah instead of shlokas