Pre-poll promises by parties, including state-wide prohibition and freebies that observers contend are economically unwise, may well decide the political future of Tamil Nadu.

But what are these promises worth unless any of them are imminently deliverable for the future incumbents, wonders N Sathiya Moorthy. 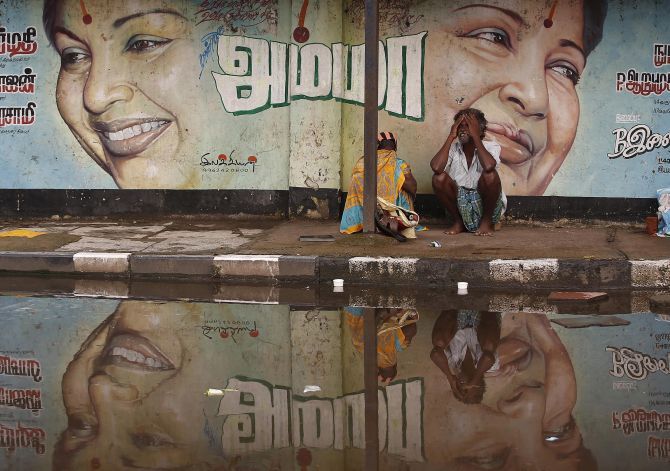 IMAGE: A couple sits along a flooded roadside under a picture of Jayalalithaa in Chennai. Photograph: Anindito Mukherjee/Reuters

Come May 16, for the first time in decades Tamil Nadu will be voting on rival party manifestos and the promises therein -- more precisely, the doable from a politico-administrative position and not ones promised from a socio-economic electoral platform.

The last time Tamil Nadu seriously voted on pre-poll promises was in 1967.

At that time the opposition Dravida Munnetra Kazhagam, who was heading a ‘rainbow coalition’ against the ruling Congress, promised ‘three-measures of rice for one-rupee’ (around three kg per rupee). The party won the election but could not deliver on the promise.

The late chief minister C N Annadurai had ‘explained’ the promise: “Moonru padi lakshiyam, oru padi nichchayam” (Three measures per rupee is our goal, but giving one measure for a rupee is for sure).

Annadurai launched the one-kg scheme in Chennai, then Madras, and finally in Coimbatore, but the government could not continue it.

Decades later, the DMK under his successor M Karunanidhi, now 93, and breakaway All India Anna Dravida Munnetra Kazhagam, now under incumbent Chief Minister J Jayalalithaa, talked about one-rupee-rice scheme (only one kg per rupee) and free-rice scheme (20 kg per family per month).

Otherwise, through the past decades, the two ‘Dravidian rivals’ have sold electoral dreams, mostly on the face of their respective leaders, including AIADMK founder, MGR, and the respective party symbols: ‘Rising Sun’ for the DMK and ‘Two Leaves’ of the AIADMK.

Other pre-poll promises did matter though. Among them were corruption, a perennial issue with every voter and every election across the country and elsewhere -- but more so in ‘Dravidian’ Tamil Nadu.

Even daily chores of governments, like maintenance of law & order have been an election issue in Tamil Nadu for long.

This time around even the opening of a rain-fed reservoir otherwise quenching the thirst of seven million people in the capital city has become a poll issue.

The Chembarambakkam lake floods of January is a live debating point still, and not just in Chennai and the rest of Tamil Nadu.

Prime Minister Narendra Modi made an obvious reference to ruling AIADMK busy-bodies down the line reportedly fixing ‘Amma’ stickers to relief material received from across the country during those flood days.

In his election campaign, Modi said that the PM’s stickers were not being pasted on the rice being given by the Centre to the state(s) as a routine.

Other BJP leaders, both from the Centre and the state, too have not spared the ‘Amma culture’ unique to Tamil Nadu.

Prohibition threatened to be a core issue in these elections but it’s not one anymore. It had ceased to be one six months ago after the DMK rival declared its intention to introducing liquor-ban if elected to power.

In the last session of the state assembly, the Jaya government reiterated its known position against complete prohibition.

However, after the DMK’s poll manifesto also promised ‘total prohibition’ in the light of similar commitments made by the Pattali Makkal Katchi and the Marumalarchi Dravida Munnetra Kazhagam, among others in the longer run-up to the elections, the AIADMK could not do otherwise.

At poll rallies, one after the other, Jaya challenged the rivals that one-step prohibition was impossible to enforce. Instead, she promised ‘prohibition in a phased manner’.

Interestingly, this has generated a public debate about the immediate enforceability of a total prohibition.

The debate is also about the economics of such enforcement, as revenue from liquor-sale, put at Rs 32,000 crore, is the single highest revenue-earner for the state.

DMK leaders are not talking figures but they cite the party manifesto, to indicate that they had done their homework before promising total prohibition from the day the party assumed office.

It’s not only the economics of prohibition that is now a talking-point. Every other manifesto item, especially of the two front-runners in the AIADMK and the DMK, are being analysed with a tooth-comb of the social media kind.

It is thus that the DMK that had introduced colour TV sets and free cooking gas connection with stove, apart from laptops, is now talking against these freebies.

In a state with eight-million men and women on the live unemployment register, job-creation has become an electoral buzzword substituting freebies.

One issue in focus linking unemployment and freebies is the unchallenged allegation that they are all China-made, hence of poor quality, low-priced with high graft-content.

It also amounts to denying the local industry their honest share in the cake and the local youth jobs in their tens of thousands.

A new area of concern should relate to the relative ‘employability’ or otherwise of the state’s youth with qualifications in professional education, especially in various streams of engineering.

No political party or poll manifesto has actually touched upon this serious concern of the industry, nearer home and afar.

The credit for whipping up the awareness on this score, as with prohibition, should once again go to the PMK and to a lesser extent MDMK – but much of the electoral credit could go the DMK way.

However, the PMK took the seriousness out of its contest not only by going it alone without the vote-wherewithal but also promising free bus-ride for all in Chennai city et al.

Caught in the inevitability of anti-incumbency, especially so after the sweeping Lok Sabha poll victory of 2014 in the state, the ruling AIADMK is still askance about what would get the votes this time.

Jayalalithaa continues to take credit for what she had done, both that had been promised before the twin-polls of 2011 and 2014, the former to the state assembly, and in the state assembly through the five years in office.

However, her one-liners like ‘chonnadhaiyum seithayen, cholladhaiyum saivayen’ (Did what I promised, also did what I had not promised) has become a social media butt like rival DMK’s ‘Chonnadai saivom, chaivadai solvom’ (Will do what we say; will say only what we can do).

Today, Tamil Nadu has Amma Canteen, Amma Pharmacy, and even Amma Drinking Water, all targeted subsidies in the eyes of the ruling party of the day, but unviable, if you ask an economist.

To this, Jaya has now added subsidised scooty bike for female students, at fifty per cent of the cost, and free mobile phones, in her much-delayed and even-more anticipated party manifesto.

It’s close to what the DMK has promised in its manifesto in terms of smart phones or tablets with 4-G WiFi connectivity for college students.

A more serious manifesto issue is the power-tariff. It commenced with the DMK declaring that they would revert to monthly billing.

Now, Tamil Nadu has bi-monthly billing on a slab-basis. Prima facie, it meant that the domestic consumer in particular has a cushion in paying his power charges once in two months, saving the alternate month’s spending on other house-hold necessities, including food.

However, the DMK has since argued that bi-monthly billing is a deliberate fraud on the consumer, as in two months his consumption level doubles but the tariff could triple or quadruple because of the slab-system.

Unable to explain away and possibly unwillingly to withdraw the slab-system, the AIADMK, in its much-delayed manifesto has now promised 100 units of free power.

Questions are now being asked if free-power will be available only to those consumers who use up only 100 units of electricity or if it would also apply to others for the first 100 units of their total consumption.

This is only a sample. There are other issues as well where a lively debate is on, over promises outlined in rival manifestoes, and promises that were expected but not mentioned.

The DMK’s manifesto promises of writing-off the education loans of students and farm loans are equally unviable in economic terms. Possibly considering the greater sensitivity of the issues involved, no one is asking questions -- not certainly political rivals, not even media talk-show experts.

Unlike in recent elections, where election promises, the party symbol and the respective faces of rival leaders mattered in campaign-time, today manifestoes have become a matter of public interest and consequent concern.

Yet, it is a long way to go in assessing the relevance of individual candidates, where most faces are unrecognisable. Where they may be recognisable, including former and incumbent ministers and legislators of competing political parties, it’s all for the wrong reasons.

A long way to go, maybe, but a beginning seems to have been made, all the same. 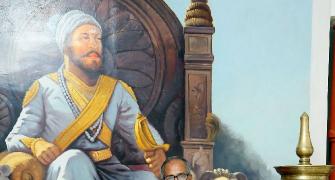 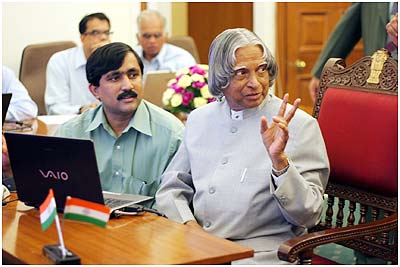 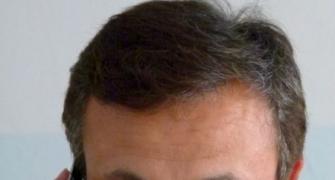 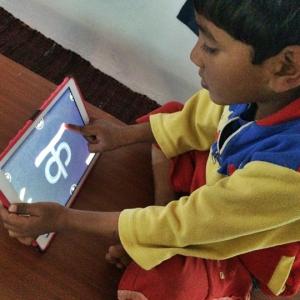