'In today's digitalised world, news about the prevalence of intolerant groups with their pathological animosity towards the minorities cannot remain a secret.'

'Silicon Valley CEOs will undoubtedly factor in such disturbing inputs as they draw up their investment plans,' says Amulya Ganguli. 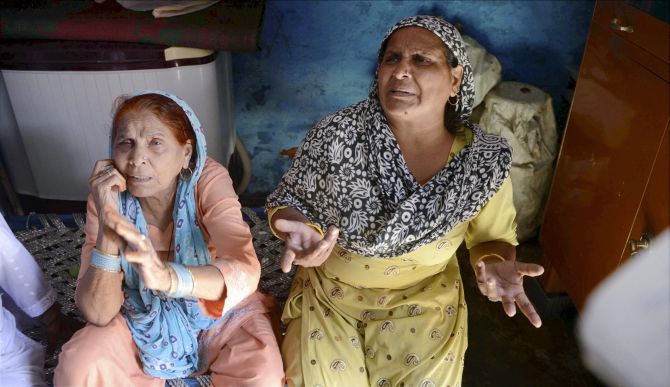 Modi may have been able to impress the Silicon Valley corporate czars with his sartorial elegance, rhetorical flourishes and tears for his mother. But they are all hard-headed businessmen who look for conditions in India which will make their investments worthwhile.

When they read that a man was killed in a village near Delhi on the suspicion of having eaten beef, and the cold-blooded murder by a mob led ostensibly by the BJP's supporters was dismissed off-hand as an 'accident' by a central minister, the investors cannot but have second thoughts.

It will be obvious to them that even if the personnel in their companies from abroad will have adequate protection even if they eat canned beef, the same cannot be guaranteed for their local employees even if they consume mutton, as in the case of the murdered man in Dadri village.

Any idea which the prospective investors may harbour about Modi representing a 21st century nation will not be in sync with his party's attitudes which are redolent of medievalism in the sense that the State will determine what may be eaten or how long the women can stay out at night.

It is obvious enough that the essence of the concepts of Digital India or StartUP India is free communication facilities and uninhibited entrepreneurial enterprises which are not constrained by social restrictions based on culinary fads or obscurantist cultural norms.

Unlike the industrial ventures and mercantile offices of the past with their restricted working hours -- women stenographers and telephone operators could not work beyond 6 pm -- and locations mainly outside residential areas, the new establishments will be free of all such constraints at a time when the laptop and the smart phone can be the basics of any office.

But the freedom inherent in such working styles cannot be effective if lynch mobs look for those whose taste for food differs from their own, or assassins routinely kill rationalists because their free thinking outlook is anathema to the frog-in-the-well mindsets of the killers.

What is disturbing in this context is what The New York Times called the prime minister's 'dangerous silence' about activities of these hordes belonging to the Hindu Right.

It is possible that Modi has been working behind the scenes to curb some of them, as is evident from the relative silence of provocateurs like Yogi Adityanath of the 'ghar wapsi' fame, and Sakshi Maharaj, who claimed that the madrasas produced terrorists.

But these are MPs of his own party and so he may have some control over them. Where outfits like the Vishwa Hindu Parishad are concerned, Modi is apparently dependent on the RSS to rein them in.

The fact that the Nagpur bosses may be unwilling or unable to do so is evident from the justification of the Dadri lynching by the VHP's Sadhvi Prachi who said beef-eaters deserve such treatment, and the reiteration of the demand for constructing the Ram temple by the VHP although the RSS has not raised the subject for some time.

In today's digitalised world, news about the prevalence of such intolerant groups with their pathological animosity towards the minorities cannot remain a secret.

The Silicon Valley CEOs will undoubtedly factor in such disturbing inputs as they draw up their investment plans.

The only way out for the prime minister is not only to be far more vocal in his condemnation of these abominable words and deeds, but also take a few legal remedies instead of allowing a BJP legislator to say that the arrests of Hindus by the UP government following the lynching are instances of Muslim 'appeasement.'

All that Modi has been able to achieve so far is to prevent a large-scale outbreak of communal violence presumably because he has learnt at least the lesson of acting quickly from the Gujarat riots of 2002 which lingered on for nearly two months, claiming 1,200 lives.

But the fact that there has been a 25 per cent increase in the cases of communal violence since he came to power shows that the poison spread by the likes of Yogi Adityanath and Sadhvi Prachi has been vitiating interfaith relations, leading to occasional killings.

It is a pity that the belief among the Muslims and Christians that the BJP's rule is virtually synonymous with communal tension has remained a fact of life although Modi has tried to lower the temperature by calling for a 10-year moratorium on sectarian animosity. His emphasis on modernity -- bullet trains, smart cities, et al -- has also been expected to turn the spotlight away from the majority-minority chasm.

But acts like favouring Hindi -- thereby recalling the Sangh Parivar's old Hindi-Hindu-Hindustan slogan -- and meat bans have raised the spectre of majoritarianism at the cost of social peace.

Amulya Ganguli is a Delhi-based commentator.

IMAGE: Relatives mourn Mohammad Akhlaq, who was lynched by a mob, at his home in Bisara village, Dadri, Uttar Pradesh. Photograph: PTI 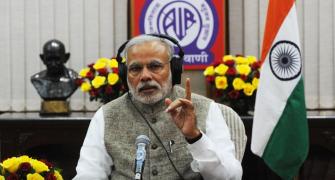 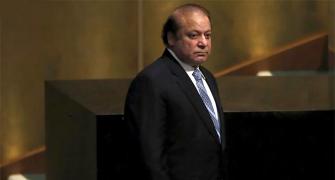 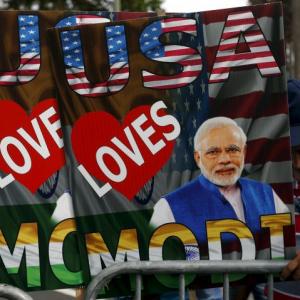 Modi and the videshi desis