Will our liberals support Madhu Kishwar?

Madhu Kishwar is a patriot whose freedom of expression needs to be supported by all, especially the liberals, argues Sankrant Sanu. 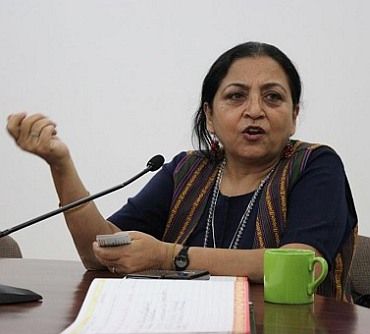 The Indian polity is plagued by two strange situations, one of judicial activism and the other of a media and intellectual ecosystem which stands up for the 'rights' of separatists and 'Bharat ke tukde' forces. Few in the media stand for the nation.

Nowhere is this situation more evident than in the mollycoddling of separatists in Kashmir and the silence over the recent warrant issued to social activist Madhu Kishwar, a patriot who stands up against the forces of separatism and dissolution, for her series of tweets against a Kashmir-based newspaper and its editor in late 2016.

Contrast this with what India's next door neighbours -- Pakistan and China -- do.

China brutally suppresses even a whiff of revolt from Tibet, has attacked Tibetan institutions and culture and has settled a large number of Han Chinese in Tibet to alter the region's demography.

Pakistan, similarly, sent Sunni tribesmen affiliated with Al Qaeda to brutally subdue a revolt in restive Gilgit-Baltistan and has engaged in a devastating campaign of ethnic cleansing in Balochistan.

The conditions in Pakistan occupied Kashmir, which is largely run by Pakistani 'agencies', are far worse than any in the Indian state of Jammu and Kashmir.

Unlike in India, though, those who ask for 'azaadi' from Pakistan simply disappear in a torture and kill campaign by Pakistan's military groups.

One is not advocating that India act like China or Pakistan.

There was a time in Kashmir when the media was not so one-sided.

After the National Conference and Congress rigged elections in the late 1980s, things took a turn for the worse.

Pakistan deployed the terror apparatus it had cultivated in Afghanistan to Kashmir. A key part of this was the silencing of pro-India voices in the media, including killing of journalists and editors, as well as the ethnic cleansing of Kashmiri Pandits.

The price for being pro-India was raised. As were the benefits from being pro-separatist.

India, through its ham-handed handling, has done little to reverse this.

It has never invested in a nationalistic narrative that questions the increased radical Islamisation of Kashmir.

It has not degraded the abilities of the hate-spewing maulvis.

It has not turned the heat on separatist voices and narratives.

It hasn't highlighted the civilisational narrative that binds Kashmir to India from centuries ago. Neither has it stepped up to protect pro-India voices.

It has been far safer to be anti-India in Kashmir, as long as you don't actively pick up the gun.

The result of this is the Kashmiri media acquiring a progressively separatist tone.

Unfortunately, the Bharatiya Janata Party has not done much to fix the problem since it has come to power at the Centre and in the state.

Both Pakistan and China have understand the power of narrative more than India does. They have both combined hard power with soft power.

I had written earlier how Pakistan spent millions of dollars via the Ghulam Nabi Fai network in the United State to cultivate a pro-Pakistan Kashmiri narrative and used Indian Left scholars to put India on the dock over 'human rights' in Kashmir.

The same scholars assume a studied silence on the far more brutal military response of Pakistan and China in Balochistan and Tibet respectively.

'Human rights' have been turned into a power game of narrative building. India has impotently stood by while pro-India voices have been silenced through the power of violence and intimidation.

The extraordinary intimidation of pro-India voices is often accompanied by complete silence from the 'liberal' ecosystem that claims to be for Freedom of Expression.

India and the BJP government need to reverse the cost benefit ratios in Kashmir and in India.

India needs to stop funding and mollycoddling separatists and to raise the costs to them through overt and covert means.

It needs to shut down hate-spewing clerics and their sources of funds, whether from Pakistan or the Saudis.

It needs to actively invest in telling the stories of Kashmir, how it was at one time an intellectual capital of the world as the birthplace of Kashmiri Shaivism, to revive the ancient scripts and texts, and tell the stories of Pakistan's terror apparatus and the woeful situation in Pakistan occupied Kashmir, Gilgit Baltistan and Balochistan.

It needs to use all its resources to cultivate and support the ecosystem.

Indian intellectuals must step up as well. Supporting Madhu Kishwar's freedom of expression is the first step.