News
Business
Movies
Sports
Cricket
Get Ahead
Money Tips
Shopping
Sign in  |  Create a Rediffmail account
Rediff.com  » News » Why this hullabaloo about English in the UPSC test?

Why this hullabaloo about English in the UPSC test? 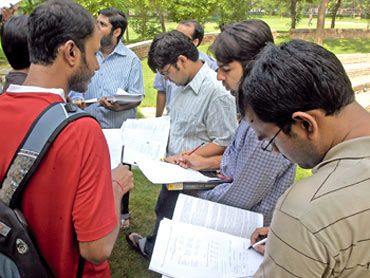 What we need to do straightaway is to get our act together and educate children better than merely award degrees. Since English cannot be thrown away, it would be better to learn it well. The crux lies there. Lowering standards of UPSC tests is no use, says Mahesh Vijapurkar.

Three-four years ago, a person with an MA in English from Nanded met the principal of a Mumbai suburban college seeking employment as a lecturer in that subject. When the principal tried to keep to keep the conversation in English, the man kept to Marathi illustrating that his grasp, at least in conversational English was near zero.

I should know because I was a fly on the wall. In another college, a teacher of English kept pronouncing ‘luck’ and ‘look’ the same way because they were same word spelt differently. If this was so at the undergraduate teaching, imagine the student’s level when they graduate. One should shudder at the outcomes. But do we?

Because such students cannot manage the aptitude test for the competitive services exam, we want the test itself eliminated. Because it suits our politics we either demand that it be done in regional languages. Because it is politics, an MP complains his language, Tulu is not one of the recognised and his region is at a disadvantage. He didn’t tell that Tulu does not even have a script.

The aptitude test is not meant to be, nor does it, test proficiency in English but only grades ability to comprehend problems and solve them. It is about analytical skills, not language. Only those who pass school and college exams by study by rote need fear it and it seems there is therefore cause to fear it. If an official cannot understand a problem and resolve it, he is worth nothing.

Despite being  home top world’s second largest population speaking English (or Vinglish?) , we are trying to throw it out by not wanting to use it to judge merit of the students who aspire for jobs across the country. If you cannot judge the reasoning or the logical aspect of a mind which would help decide and implement policies that affect Indian population, then what purpose the UPSC test at all?

In that case, people could be recruited from the employment exchanges with politicians peddling influence to fix jobs for their supporters. Politics is, as we all know, a business of patronage and cronyism and the steel frame which declined to iron frame may well turn to plastic. I am sure it would. After all, who cares for outcomes as long as it suited the political class?

I have not come across a single instance of people demanding that English as a language of communication in a country with any number of tongues be taught better even if the medium of instruction, given the preference to mother tongues. Instead, universities like Mumbai’s allow students to write their answer papers in Marathi for questions for subjects taught in English.

Authorities may not, but people do have their preferences which are at a variance with the former. The shift from admissions from regional language schools to English medium is marked. Your driver or maid may borrow from you for admission in such expensive schools because government schools teach in local languages that keeps people local in a global village.

I didn’t get to ask the job aspirant from Nanded if he had answered his English paper in Marathi because propriety kept me from butting in though I was dying to find out. Neither the universities whose academic standards are supposedly supported by the University Grants Commission by various prescriptions seems concerned.

We know that large number of students in Std VII cannot do Std II sums or read their principal book -- there are studies and surveys affirming this -- but students from even better English schools read pages aloud like one would the grocery list -- no pauses, no intonation and the listener would scarcely know even the gist. There is, thus, antipathy towards the language we cannot do without.

UPSC tests do not need proficiencies of the kind to analyse the intricacies of Byron or Shakespeare nor write an essay to equal them, but it does require functional capabilities. Nor can it allow answer sheets filled in local languages and IAS officials posted to places where another language is spoken. English then helps out. Since states interact, we would need a battery of translators and interpreters.

It is the norm that a person from one state when posted to another is perforce required to learn the local language spoken there. An IAS official hailing from Bihar allotted to Tamil Nadu cadre cannot avoid learning Tamil. Nor the one from there sent to UP buck Hindi saying it was being imposed on it. I have worked in several states and without knowing the local language, one cannot just function.

Then why this hullabaloo about English and bring the entry level test to the administrative services to a low and not prepare students across the country to have proficiency in the language instead? Why should the British Council be asked to help IIT-Bombay students with English communication skills when they have difficulty integrating with peers and study in English?

I suppose an acknowledgement that English is the one single binder for a country that is increasingly getting parochial would be a first step instead of tweaking the competitive examination’s content. Yes, it would be a long term programme and hopefully enduring to make a difference. It is better we have one language for official work than allow politics to encourage a shrill babble.

What we need to do straightaway is to get our act together and educate children better than merely award degrees. Since English cannot be thrown away, it would be better to learn it well. The crux lies there. Lowering standards of UPSC tests is no use. 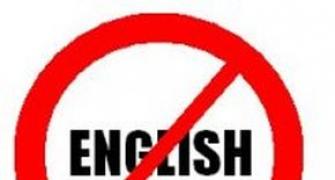 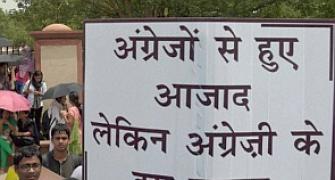 'In the national interest, English is a must' 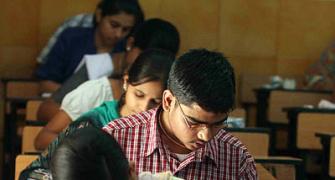 No English in CSAT: Trade unionism before entering a trade!