News
Business
Movies
Sports
Cricket
Get Ahead
Money Tips
Shopping
Sign in  |  Create a Rediffmail account
Rediff.com  » News » Why the turbulence in Bangladesh matters to India The increase in home-grown radicalised Islamic groups and the rise of Islamic State and Al Qaeda in Bangladesh should be a matter of worry for India, which shares a 4,100 km border with its eastern neighbour, says Rajeev Sharma.

Bangladesh has been in the news recently for reasons which should concern India directly.

Whatever happens in this contiguous neighbouring country inevitably impacts New Delhi substantively as India shares the longest boundary with this country exceeding 4,100 kms.

Bangladesh has been, of late, witnessing a great deal of turbulence attracting world attention. While the ruling Awami League and its ousted opponent, the Bangladesh Nationalist Party, are sworn enemies in the country's politics, the latter has by its side the Jamaat-e-Islami, the Islamist outfit largely catering to the radicalism ideology.

Bangladesh is seeing more and more fundamentalism-related violence and attacks on personalities bearing a secular or even moderate identity. Bloggers, professors, activists, etc are being systematically eliminated.

Voices advocating a progressive approach are being silenced. The latest killing was of the editor of the LGBT magazine Roopban by men posing as couriers. The most worrying aspect has been that the responsibility for these killings are being claimed by the likes of Islamic State.

While there has been denials from various authorities on the spread of IS and Al Qaeda in Bangladesh, a US-based war search group The Institute for the Study of War has recently reported that IS was preparing for a global surge of activities before and during Ramadan between June 6 and July 5 and the group was to announce its local designated leader in Bangladesh.

This corroborates the report in the online magazine Dabiq that IS had now identified a leader for the Bengal region, who has pledged allegiance to IS chief Abu Bakr Al Bagdadi.

Since last September, IS has been claiming responsibility for the death of secular writers, liberal publishers, online activists, etc in Bangladesh. However, the Bangladesh government has claimed that home-grown Islamist radicals were the killers.

This trend assumes credence when a personality as important as US Assistant Secretary of State for South Asian Affairs Nisha Desai Biswal tells the Bangladesh government that the US suspects that the Bangladesh terror outfits are trying to link up with foreign terror groups.

What adds to the worries is the fact that the Bangladesh law enforcement agencies suggested self-censorship to prevent further killings with the Inspector General of Police, Dhaka, Shahidul Hoque, on record, encouraging bloggers and writers to censor themselves if killings were to stop. This was followed by the government banning social media apps including Facebook, WhatsAp, etc with security risks being cited as the reason.

Amidst these developments it has been seen that people who can afford have already left Bangladesh. Raihan Abir is an example of this. Abir, the editor of the blog Mukto-Mona (Free Thought), fled Bangladesh with his then-pregnant wife to Toronto after the blog's co-founding editor Avijit Roy was killed by men wielding machetes.

Predominantly, the killings have been of people advocating a moderate secular ideology and obviously fingers get pointed towards the radicalised Jamaat-e-Islami cadres, who are jihadi minded.

The Jamaat-e-Islami has recently been under intense pressure following the conviction and sentencing of its important members for the atrocities committed during the 1971 war of independence of Bangladesh.

Matters have got compounded with the Bangladesh supreme court upholding Jamaat-e-Islami chief Motiur Rehman Nizami's death sentence for his crimes during the 1971 Bangladeshi liberation war.

The situation in Bangladesh is fluid and things are only going to get difficult for Sheikh Hasina to keep the country peaceful as the Jamaat-e-Islami, all by itself and in collaboration with the BNP, will not leave any stone unturned to incite violence not only for the spread of fundamentalist ideologies but also to project the Awami League as being incapable of maintaining law and order in the country.

One also should not forget that the BNP and particularly the Jamaat-e-Islami has numerous friends and solid backing from the terror hub called Pakistan. 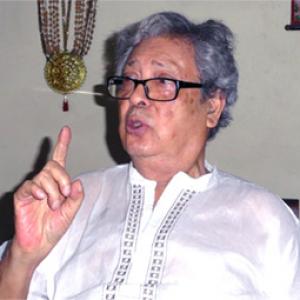