News
Business
Movies
Sports
Cricket
Get Ahead
Money Tips
Shopping
Sign in  |  Create a Rediffmail account
Rediff.com  » News » Why the 1972 Shimla accord was a disaster

'Indira Gandhi proved herself a great war leader, but failed as a statesman,' says Colonel Anil A Athale (retd). 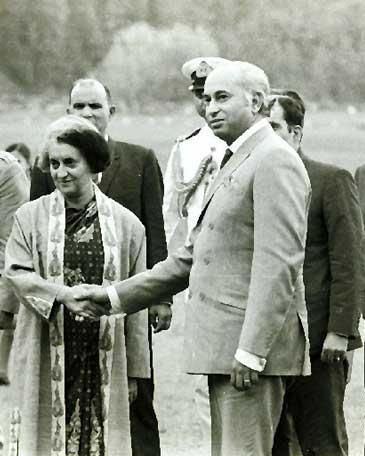 The 1971 India-Pakistan and the Shimla Agreement of July 2, 1972 are some of the most important events of the 20th century history of the Indian subcontinent.

While the 1971 war has been extensively analysed and commented upon, the Shimla conference that dealt with its aftermath has not attracted enough research as it ought to have.

Analysing the decision making process at the Shimla talks of 1972 is important. The decisions taken/not taken then continue to affect the Indian subcontinent and even more importantly the rationale, mindsets and logic on display then continues to be part of Indian decision-making on war and peace even 45 years after the event.

In 1999, after a first post nuclearisation skirmish at Kargil, Atal Bihari Vajpayee, another Indian stalwart leader, followed in the footsteps of Indira Gandhi.

The Indian syndrome of inability to exploit battlefield victory and frittering away the advantage gained at the cost of soldiers' blood continues. It is therefore of utmost importance for future and not merely of historical interest to analyse and understand the events of July 2, 1972.

It is necessary to understand the context of national euphoria that existed then. Indira Gandhi was the flavour of the season and as one senior Congress leader Dev Kant Borooah went so far as to coin the phrase 'Indira is India.'

At the Shimla conference in 1972, Indira Gandhi was at the zenith of her power. The Shimla agreement therefore escaped critical scrutiny.

During the 1971 war, Mrs Gandhi's strategic perception and control on the five fronts (diplomatic, political, economic, military and psychological) was superb. She used persuasion, hindrance and coercion on all five fronts without opening hostilities.

Military force was only used as a last resort. Men of the three defence services rose to the occasion and displayed tactical initiative and skill of a high order.

The war was a triumph for individuals who transcended an out-of-date institutional politico-military decision-making system. The 1971 war culminated in the capture of 93,000 Pakistani prisoners and a unilateral declaration of a cease fire by India after our ground forces had made minor incursions into West Pakistan.

The main agenda at Shimla was to deal with the aftermath of the 1971 War and usher in durable peace between India and Pakistan.

There was widespread concern and anxiety in Pakistan over the prisoners of war in India's hands. There were unanimous demands in the press and Pakistan national assembly for their early repatriation. Some Pakistani politicians said, 'Pakistanis are prepared to sacrifice their land for the sake of the prisoners -- it is better to have the POWs returned than to have the land back.'

Pakistan Prime Minister Zulfiqar Ali Bhutto kept blowing hot and cold. Bhutto spoke with two voices. In Pakistan he said, 'Your (POWs) humiliation is our humiliation and we will bend backwards to see to it that no a moment is wasted for correct results (their release).'

With India, Bhutto would show no great concern for the POWs' early return. In these circumstances, there was nothing immoral or illegal about using the POWs issue as leverage to ensure a just and durable peace.

It was nobody's case to demand war indemnity from Pakistan, or to hold onto territory across the international border forever. However, the issue of repatriation of POWs, Bangladesh's insistence on the trial of war criminals (about 195 POWs were charged with specific charges of genocide and serious violations of human rights), the climate of public opinion in Pakistan for their early return, the elimination of the army as a factor in the formulation of Pakistan's policies, and the withdrawal of Indian troops from Pakistani territory could all have served as levers to put pressure on Pakistan to accept a no nonsense fair and just solution to the Kashmir problem.

Foreign observers, basing their views on those close to Bhutto, have pointed out that 'Bhutto was willing to forsake the Indian-held two-thirds of Kashmir and agree that the ceasefire line, to be negotiated, would gradually become the border between the two countries.'

However, India seems to have been confused about its war aim. The Shimla Accord was never linked to the issue of POWs and the withdrawal of Indian troops from Pakistani territory. This was a major blunder on Indira Gandhi's part.

When D P Dhar (one of Indira Gandhi's key advisors) went to Pakistan for a pre-summit dialogue with Pakistani leaders, he was more concerned with the issue of recognition of Bangladesh by Pakistan than the core issue of finding a lasting solution to the Kashmir problem.

While India held all the cards at Shimla, it was Bhutto who called all the shots. It was then being propagated that the greatest merit of the accord was that the two countries decided to renounce the use of force against each other.

It is comic that a ten times stronger India was seeking security guarantees from a weak Pakistan. But even that commitment was jettisoned when Bhutto talked of a 1,000-year war, and later when Pakistan breached the accord by launching cross-border terrorism in Jammu and Kashmir.

Some career diplomats and commentators on foreign affairs have tried to sell the line that after the 1971 war, India was faced with only two courses of action: Either the Shimla Accord or something on the lines of the Treaty of Versailles. They gave an erroneous impression that between these two extremes there was a complete vacuum.

In fact there were many other possibilities, shades and gradations for a solution to some of the more vexatious problems between the two countries.

The International Herald Tribune pointed out that the 'Shimla conference apparently could reach agreement on none of the substantive issues dividing the two sides.' It was obvious that Indian negotiators never seriously linked those issues with the Shimla Accord.

The plain truth is that India's political leaders and bureaucrats failed to assess Pakistan's predicament correctly, did not have a clear national aim, and were ignorant of the basic axioms shaping the role of the armed forces in democratic governance.

Our negotiators lacked the realisation that diplomatic treaties, which are not backed by military power, are worthless. They did not involve our military leaders in security policy planning.

After winning a stunning victory, Indian leaders behaved as if the armed forces had done something immoral or committed a sin. In the Indian mind 'statesmanship' is inexorably linked with 'peace.'

Not unlike (due to false Gandhism) our penchant to celebrate and flaunt 'weakness' and equate it with morality. Indira Gandhi proved herself a great war leader, but failed as a statesman.

At Shimla we accepted Kashmir as a 'dispute.' We also gave equal status to Pakistan by permitting it to retain land occupied by it in J&K, thus sowing the seeds of Kargil- like adventures in the future, all this when we held all the cards and Kashmir was not the cause of the 1971 War.

Indira Gandhi got carried away by euphoria, trusted Bhutto and let down the country and its soldiers.

In the end, all we were left was an empty promise by Bhutto: 'Aap hum per bharosa ki jije (Trust me).' 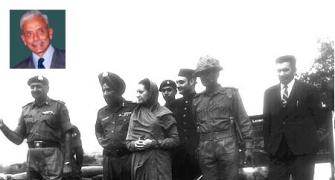 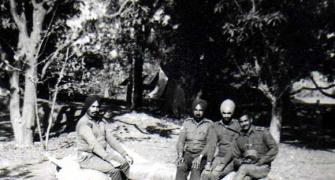