The BJP-NDA is still the front-runner for 2019 by a long distance.
But if the Congress can go from 110 million to 130 million votes, it will yield a very different kind of NDA.
That is what Modi and Shah are fighting to avoid, says Shekhar Gupta. 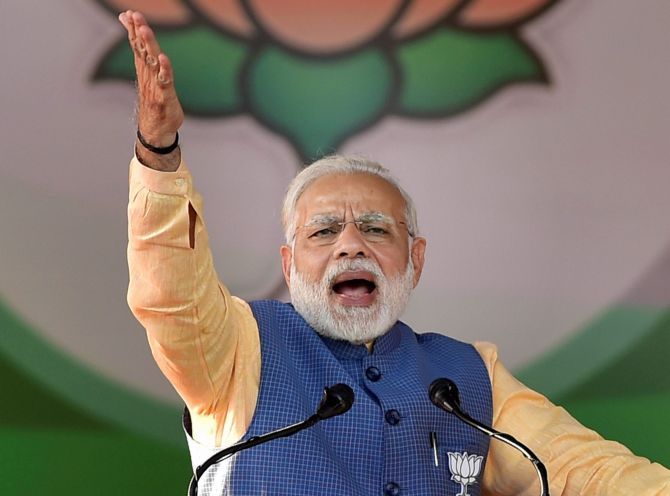 Reading Prime Minister Narendra D Modi's body language is a mug's game. He is too consummate an artiste of the set-piece to leave things unsaid or undisplayed, between the lines or gestures.

He is too well-rehearsed (in his mind) an orator to give you any slip-ups that betray what is 'really' on his mind.

And he is so much the constant campaigner that his speeches shortly after the big 2014 win had already begun sounding like he was back fighting again.

This is a short caution for those who read anxiety in his two speeches earlier this month in both Houses of Parliament.

You have to, however, examine some pointers in detail. The lines on his forehead were deeper. There was more a touch of anger than usual disdain for the Opposition.

Most importantly, the Congress was back on his mind as his biggest concern.

We counted at least a dozen direct references to the Congress in his Lok Sabha speech, the 48-member party meriting one mention for every four MPs.

Besides the Congress, there were several other references to the 'dynasty', beginning with Nehru. His sins, and those of his successors, were recounted.

Kashmir in Nehru's case, the Emergency for his daughter Indira, the 1984 massacre of Sikhs for her son Rajiv, the hasty and politically loaded division of Andhra for Sonia and then Rahul's tearing of the ordinance in public.

As a political statement, this was a masterful charge sheet on the dynasty over four generations. But it left too little time for his own government.

In conventional analysis, you might be tempted to say that this was more like an angry Opposition leader versus a well-entrenched incumbent, or that of an incumbent unnerved by what he sniffs as shifting winds; that he is so rattled he is giving the Congress too much importance.

Remember, nothing conventional applies to Modi's style, though.

Those who know him, and have worked with him closely, tell you he does not take any Opposition lightly, ever.

And yes, Modi is constantly in campaign mode. How else would his party be now ruling 19 states, on its own or in coalition?

Whatever the Congress may count for in the big test of 2019, in every state election this year, except Tripura, it will be the Bharatiya Janata Party's main challenge.

The Congress is the incumbent in two, Karnataka and Meghalaya, and senses an opportunity in Madhya Pradesh and Rajasthan after its by-election successes.

If the Congress manages to retain Karnataka, it will have the tailwind for the three big ones later in the year: Rajasthan, Madhya Pradesh, and Chhattisgarh.

On the other hand, if the BJP wrests Karnataka, the momentum will shift and the anxieties of Gujarat, followed by the Rajasthan by-elections, will fade.

Modi isn't a step-by-step player, like the obedient batsman who follows the coach's advice to focus on playing only the ball that is delivered to him and not bother about the next.

Modi is the type who will play the pitch, the weather, the umpire, and the media.

His method is winner-takes-all in the spirit of medieval conquests.

That's why, when the going looks even remotely tough, as it did at one point in Gujarat, he pulled out everything, including that fantastic conspiracy theory of the Pakistanis and Dr Manmohan Singh joining hands to instal a Muslim chief minister in the state.

The Modi-Shah style is total politics. They don't just want to win, but destroy and bury the Opposition.

This is fair enough, except that now it looks different from what it was six months ago.

The closer than expected results in Gujarat and the margins of the by-election defeats in Rajasthan are the more visible troubling signs.

There are others. This, about six months, is the longest period where Rahul Gandhi has shown undistracted focus. He has found traction within his party and also with crowds.

Today, other Opposition parties are reluctant to move under the Congress umbrella, but if it retains Karnataka, it will change.

Remember, Modi and Shah aren't just campaigners or politicians, they are also election engineers and scientists. They are too sharp to keep looking at the Congress in terms of its 44 seats in 2014.

They are conscious that while their party got about 170 million votes then, the Congress collected about 110 million even in an election so disastrous.

The BJP-National Democratic Alliance is still the front-runner for 2019 by a long distance. But if the Congress can simply go from 110 million to 130 million votes, it will yield a very different kind of NDA.

That is what Modi and Shah are fighting to avoid.

Ever since India stopped giving clear mandates (after 1984), I had followed the best-of-nine-sets tennis match logic for coalition governments.

So, think of the nine major states in India where political fortunes can shift: Uttar Pradesh, Maharashtra, Andhra Pradesh (including Telangana in 2014), Madhya Pradesh, Bihar, Rajasthan, Karnataka, Kerala, and Tamil Nadu as the nine 'sets' of this tennis match.

Any party, or coalition, that wins five of these, I argued, would be able to build a coalition and rule India.

These states packed 351 seats, and the side winning five was likely to cross 200, which, I argued, was the new 272 as it will then attract enough smaller parties.

Take a close look at how this added up, and you will know why they worry now.

The 282 included all of Rajasthan, all but two in Madhya Pradesh, 42 of the 48 in Maharashtra, and 73 of the 80 and 31 of the 40 in Uttar Pradesh and Bihar, respectively (including a few going to its allies).

In addition, there was a clean sweep in Gujarat, Uttarakhand, and Himachal and near clean-sweep in smaller states such as Jharkhand, Chhattisgarh, and Haryana.

The BJP's problem is that its 282 was too heavily made of this total swathe of saffron in the Hindi heartland and the west.

The south and the east mostly stayed out, but then it didn't count.

The party knows it will be impossible to repeat this in the clean-sweep states.

Even Gujarat might see a few losses even if people bury their frustrations when Modi himself is the candidate.

If you look at India's political map now, a repeat of 272+ looks impossible. Rajasthan, Madhya Pradesh, Maharashtra (especially if the Shiv Sena is estranged), and Uttar Pradesh will see losses.

Barring a few more seats from the north east, no others are available to fill the deficit.

That is why we can today be debating the likelihood of an NDA government without a clear BJP majority -- apologies Congress, we still do not see you in power. Not yet, with the latest India Today poll showing your 100+ tally as a huge improvement.

Six months ago imagining a non-BJP majority NDA would have been fantasy. Today, it is a likelihood.

As we have said in the past, Narendra D Modi as prime minister without a majority won't be half a Modi.

His style is authoritarian, not accommodative.

He doesn't want to run a give-and-take coalition after five years of full majority in New Delhi and 13 years in Gujarat.

That's why he is already off the block with his 2019 campaign. 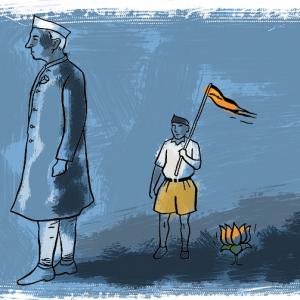