'The Godse controversy may have helped Kamal Haasan reach out to a larger audience, both inside the state and outside, coming as it does when the main campaign for elections 19 is over and only those in the four assembly bypoll constituencies are drudging along,' says N Sathiya Moorthy. 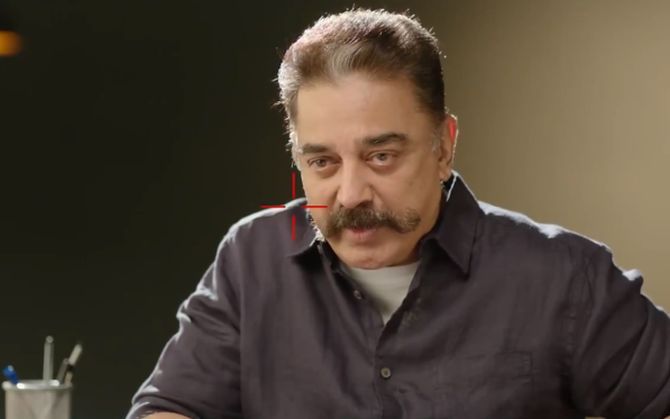 In the normal course, it might have remained confined to newspaper reports and TV coverage nearer home in southern Tamil Nadu.

If nothing else, the state was already getting tired of the high-octane campaign for the April 16 Lok Sabha polls and also by-elections in 18 of 22 assembly constituencies.

Only the politically alive and active may have even cared more for the poll results, which many in the state strongly feel  is ‘fixed’ by the cash-for-votes campaign of the near-unique TN kind.

With the result, when actor-politician Kamal Haasan declared that “independent India's first terrorist (‘theeviravaadhi’) was a Hindu, his name is Nathuram Godse... there it starts”, with reference to Gandhiji’s assassin, it found its place only in the inside pages of local newspapers, both Tamil and English.

Yet, a day later, when Bollywood actor Vivek Oberoi joined issue with Kamal Haasan, the latter might have got a larger audience, this time north of the Vindhyas, where again multi-phase polling spread over weeks and months has enough matter otherwise to fill newspaper pages and TV news space.

'Dear Kamal Sir, you are a great artist. Just like art has no religion, terror has no religion either! You can say Godse was a terrorist, why would you specify 'Hindu'? Is it because you were in a Muslim- dominated area looking for votes?' Oberoi tweeted. 'Please Sir, from a much smaller artist to a great one, let's not divide this country, we are one,' he added.

Kamal Haasan was campaigning for one of the four assembly by-elections scheduled for May 19, in Aravakurichi which has a substantial Muslim population where started his ‘Godse reference’ with the prelude, 'I am not saying this because this is a Muslim-dominated area, but I am saying this before a statue of Gandhi.'

“He is triggering communal violence in a place where there are a lot of minorities. The Election Commission must take stringent action against Kamal Haasan for his speech,” she tweeted in Tamil.

The party also followed up Tamilisai’s comments with a request for EC to ban Kamal Haasan from campaigning in the four by-poll constituencies. In doing so, the state BJP was possibly taking a leaf out of a similar EC ban on Uttar Pradesh Chief Minister Yogi Adityanath and Opposition BSP boss Mayawati, though for lesser terms, citing their ‘communal’ campaign speeches.

This is not the first time that Kamal Haasan, born a Hindu-Brahmin, has courted controversy of the kind. Long before entering direct politics, he had repeatedly identified himself with ‘Dravidian social ideology’, which in some TN homes translates as being ‘anti-god’, ‘anti-Hindu’ and ‘anti-Brahmin’.

He had also declared the late DMK chief M Karunanidhi as his ‘leader’.

More recently, after launching his political party, in preparations for Elections 2018, he began making pointed reference to ‘Hindu extremism’ in November last. Promptly, BJP and RSS leaders in the state began condemning him publicly. Pro-Hindutva social media also dragged him over the coals.

Yet, it’s the ‘Godse controversy’ that may have helped Kamal Haasan reach out to a larger audience, both inside the state and outside, coming as it does when the main campaign for elections 19 is over and only those in the four assembly bypoll constituencies are drudging along.

It is also here that Vivek Oberoi may have become Kamal Haasan’s unpaid mouthpiece in the North.

Despite the ‘negative publicity’ that it might have entailed over the short-term, the ‘Godse comment’ may have some positive politico-electoral gains for Kamal Haasan and his MNM, especially in the light of an increasing ‘minorities’ perception that the traditional DMK supporter of their identity and cause may be halting and unsure about its own future approach to issues of religion and religious concerns in public life.

Barring the DMK poll manifesto, party speakers, especially party boss M K Stalin, made little or no reference to the all-consuming ‘minorities issues under the Modi regime’ in his campaign speeches across the state than in specific localities where Muslim/Christian population was substantial.

It became an electoral necessary for Stalin and the DMK now under him, especially when he has the politico-electoral need to push the party to the ‘middle-path’, which process had deliberately been set in motion by late father Karunanidhi.

It was Karunanidhi’s considered and calculated decision to align and identify with the post-Ayodhya BJP under prime minister Vajpayee in the victorious Elections-1999 that re-wrote the party’s ‘social script’ for the future.

The DMK’s electoral discomfiture became known in the post-Jaya by-elections for her R K Nagar assembly constituency in the suburbs of capital Chennai.  In the ‘aftermath’ of PM Modi’s sudden decision to visit a relatively stable Karunanidhi at his home, and Stalin’s decision to cut short his overseas holiday by a couple of days to receive the former, sent out a ‘contradictory signal’ to the substantial ‘minorities’ population in the area.

The result was that the DMK that had lost to incumbent CM and the state’s most charismatic leader by a relatively lower margin of 40,000 votes and respectably so, was pushed to the third place in the by-election, with its candidate losing his security deposit. T T V Dhinakaran, the controversial ‘AIADMK rebel’, now heading the breakaway AMMK, romped home victorious, by a massive majority of 75,000 votes, the latter made possible by the non-traditional ‘minorities’ votes, otherwise the DMK preserve.

With talk of a post-poll re-merger of the AIADMK on the one hand, and some AMMK leaders publicly declaring their support for the Opposition DMK to unseat Chief Minister Edappadi K Palanisami \through a no-trust motion in the coming weeks and months, the MNM seems now hopeful of keeping the party alive until after the assembly polls, otherwise due only in 2021.

This owes to the minorities’ perception that a ‘re-united’ AIADMK cannot afford to disown its ‘soft Hindutva’ politics and policies, which Jayalalithaa had evolved without being actually aligning with the BJP.

The DMK’s pre-results confusion in Stalin meeting with Telangana’s TRS Chief Minister K Chandrasekhar Rao \on Monday has bugged local Congressmen enough. Like the Left parties, the Congressmen see TRS and Rao \as BJP’s B-Team. Rao’s current efforts to form a national-level third front post-poll, according to some, was aimed either at making himself the prime minister, for son K T Rama Rao to take over the state reins from him -- or, to take them all to the BJP camp, with or without Modi leading them.

There is also a feeling in some DMK circles that KCR was also taking his regional one-upmanship campaign against incumbent Andhra Pradesh Chief Minister N Chandrababu Naidu to the national level, for a possible fight to the finish.

Indications, according to them, was that Naidu may lose his job in Andhra Pradesh to YSR Congress leader Jaganmohan Reddy in the current elections, and may be fashioning himself to take the place of late Marxist veteran, Harkishan Singh Surjeet, who fashioned the regional alliance with Congress support, post-poll ’96, for H D Deve Gowda to become PM, however short the term.

From a purely TN perspective, the Stalin-KCR meeting is indicative of the beginning of a parting of ways for the Congress, whose president Rahul Gandhi the DMK boss was the first to anoint in public. To the DMK cadres in the four assembly constituencies, where the triangular by-poll fight is becoming tough with the AIADMK and the AMMK forming the other two angles, any demoralisation of the Congress supporters, could spell discomfort, or even doom, for party candidates.

Even otherwise, a possible re-orientation of ‘minorities electoral thinking’ vis-a-vis Kamal Haasan and MNM could well mean that they could take the centre-stage of alliance politics ahead of the state assembly polls whenever held.

A lot will depend on the results of elections 19, especially for the 22 assembly by-poll seats, which are decisive for the EPS government’s continuance and stable tenancy, depending on where the DMK especially stands post-poll in the state and the Congress ally at the national-level.

And on all this might also depend, forgotten prospective politician-actor Rajinikanth’s promised  entry into electoral politics! 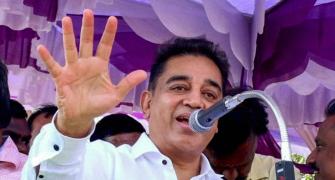 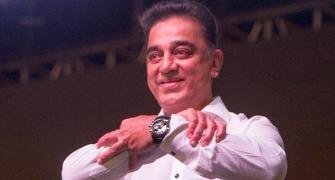 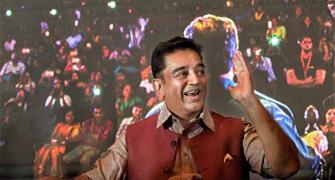 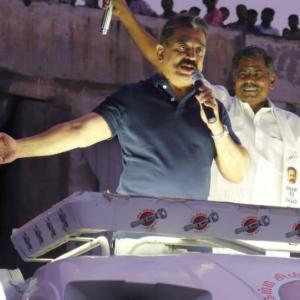