'As a great democracy, we must be responsible and uphold the rights of those who come to us seeking shelter.'
'Everything in the Hindu faith tells us that this is obligatory on us,' says Aakar Patel. You can travel as an Indian tourist across all of Italy -- Rome, Venice, Milan, Bologna -- knowing to speak only a little bit of one language.

I am not referring to Italian, but Bengali. The country is full of Bangladeshis immigrants, all of whom are a particular type.

They are male, they are young (from their mid-20s to their early-30s), they usually have a similar physical type (they are small, thin and dark).

One other thing they have in common is that they are all very hardworking. The ones who have come recently and have no capital to do anything and little other support, sell things on the street.

To tourists they sell selfie-sticks, little plastic helicopter like toys, cold water, temporary raincoats and things like that.

Others who have been there for longer and perhaps have some paperwork, are waiters and chefs, and some manage the stalls selling food and other items that are owned by Italians.

I usually speak to them in my broken Bangla to ask them about their lives, and I do not need to tell the reader that their life is hard.

I have great respect for their courage and their determination, but I also have sympathy for their plight.

To be away from your home and from your networks, to be in a foreign land is not easy for any of us, and all humans are essentially the same.

It is the very rare Italian-Bangladeshi who does not want at some point to return to his homeland, and who is completely happy in Italy, even though it offers him a little more opportunity to make a living.

I come from a community of Gujaratis who have historically not been very educated, but have been enterprising and not afraid to take on hard work.

This is why the world knows of the phrase Patel Motel.

But most will not know that the majority of Patidars who come to the United States do not come with capital. They come from towns and villages where there is a lack of local opportunity, and they have to do physical work in the US.

My own parents and sister worked in motels in America that they did not own. This meant cleaning rooms and doing the sort of work that middle class Indians would never do.

Ownership of places is something that only the minority of Patidars in America have.

This is usually the case with most immigrants. These days in India and the rest of the world we are dealing with another kind of immigrant, the refugee.

Whether the Syrian or the Rohingya, this individual is fleeing violence of the most extreme sort.

The war in the Middle East was begun by the United States and Britain and then joined in by other European nations like France. However, they have almost washed their hands of the consequences of their actions.

America, which has always seen itself as a distant place protected on both sides by vast oceans, does not have to live with the consequences of its actions. It can wage wars in Korea and Vietnam without having to bring these wars back home.

I often see the global photo feed of news services to see what is happening around the world. It will shock most readers to see visuals of the extreme violence that Syrians are being forced to flee.

Why do we have such little sympathy for such people? Is it because we view their religion in a particular light?

The coldness with which the Indian government has responded to the brutality against the Rohingya is disappointing to me. Do we disbelieve the reports of the crimes against them by the Burmese State?

Do we believe that they are all leaving their homes to come to India because they enjoy living in refugee camps? We must be quite delusional to assume that.

Do we think, as our government seems to think, that these people are a terror threat only because they are Muslims? It is remarkable that we should have such a crude outlook towards the world and other human beings.

This government has already made a serious mistake because it does not properly think about such things. It announced a policy that it would only accept refugees from the minority communities from Pakistan and Bangladesh.

In doing so, it announced more or less that India would only welcome non-Muslims.

Burma is a Buddhist nation that is oppressing its Muslim minority. What happens to our policy now?

As a great democracy, we must be responsible and uphold the rights of those who come to us seeking shelter.

Everything in the Hindu faith tells us that this is obligatory on us.

We will be total hypocrites if we take pride in the immigrant Indian communities (many of whose individuals are illegal immigrants) but look on immigrants from other nations as being terrorists and those who are out to live off our resources.

IMAGE: A Rohingya refugee boy lights a fire to cook food outside his temporary shelter in Bangladesh.
Photograph: Danish Siddiqui/Reuters 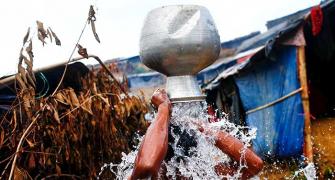 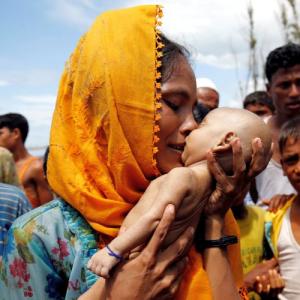