Why India should declassify historical documents

The government's policy of keeping all such information permanently classified under the Official Secrets Act has resulted in a situation in which no authentic account of national security management is available, writes B Raman.

Knowledgeable public debate on national security issues is hampered by the lack of the required information which would facilitate such debate. The government's policy of keeping all such information permanently classified under the Official Secrets Act has resulted in a situation in which no authentic account of national security management is available. Whatever studies have been done in public were based on open source information and leaks, which are often incomplete and unauthenticated.

In many countries, classified reports which would be of use for such studies are periodically declassified and made available to the research scholars and the other sections of the public after excising sections which could hamper future operations. In India, the political class and the bureaucracy have seen to it that there has been no declassification since 1947. V P Singh, when he was the prime minister in 1989-90, wanted to change this, but had no time to have this issue examined due to his partisan political preoccupations.

There is a need for sustained public pressure on the government to change this policy. Among the documents of historic value which could be declassified after appropriate editing without damaging national security are the following:

The National Democratic Alliance government headed by Atal Bihari Vajpayee released to the public the report of the Kargil Review Committee headed by K Subrahmanyam, which went into operational and intelligence failures during the Kargil conflict of 1999. It also released to the public the reports of the various task forces appointed by it to review the national security apparatus after excising sensitive portions. But it did not accept the recommendation of the first National Security Advisory Board headed by Subrahmanyam that the annual reports of the NSAB except those relating to the nuclear deterrent should also be released to the public. The NSAB reports are largely based on open source information.

There are other documents of historic value which should be made available to the public. When he was senior adviser to Indira Gandhi after 1980, R N Kao, who headed the R&AW from 1968 to 1977, had a retired officer of the information service who had served in the R&AW in the past appointed in the R&AW to prepare a factual account of the role of the R&AW in the liberation of Bangladesh after going through the records of the organisation and interviewing the people concerned.

He had made some progress, but his work remained incomplete when Kao resigned in 1984 after the assassination of Indira Gandhi. This post was abolished and the work discontinued after the resignation of Kao. What happened to his incomplete study? Where are those papers? Why this work is not being completed? Nobody knows.

Kao had also got a special study done on the US National Security Council. It is understood its conclusion was that an NSC of the US model would not suit India. What happened to it? When the NDA government set up a special task force in 1998 headed by K C Pant to recommend the setting-up of an NSC mechanism in India, Kao wanted to send this study to it. Nobody knew where it was.

Before Operation Blue Star, Indira Gandhi tried frantically to avoid sending the army into the Golden Temple by entering into secret talks with the overseas leaders of the Khalistan movement and the leaders of the Shiromani Akali Dal in Punjab. Kao co-ordinated this exercise. On his instructions, all these discussions were secretly recorded for the information of Indira Gandhi, who wanted to protect herself against any future misrepresentation. These recordings form an important part of the exercise, which preceded her decision to send the army into the Golden Temple. Nobody knows what happened to these recordings.

A former IFS officer, who was a great admirer of Kao, persuaded Kao in the last years of his life to record his memoirs by talking into a tape recorder. Kao agreed to it and recoded his memoirs as a police officer and also about some aspects of his work as the head of the R&AW. He insisted on the recordings being transcribed and corrected by him.

The officers, who participated in the Sri Lanka operations, are dying one after the other. In a few years from now, no one with a first-hand knowledge will be available. Before that happens, a detailed study should be made of the conflicting roles of different agencies and the Tamil Nadu police, which contributed to the failure of the Indian Peace Keeping Force, and released to the public. 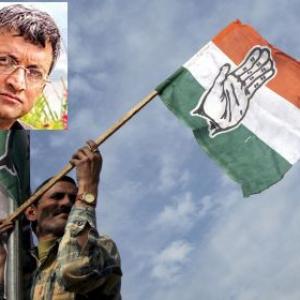 'The Congress, historically, has been inclusive'

The degeneration of India's universities