News
Business
Movies
Sports
Cricket
Get Ahead
Money Tips
Shopping
Sign in  |  Create a Rediffmail account
Rediff.com  » News » Why I am not eager for a 'Congress-mukt Bharat'

'Like it or not, the Congress is still the only party with the potential to challenge the BJP at a pan-Indian level,' says T V R Shenoy. 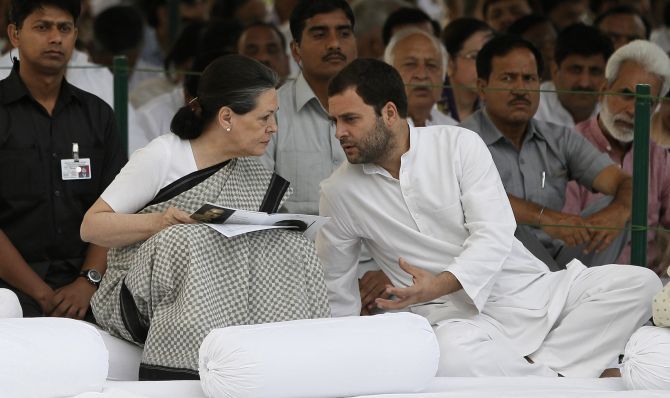 There are many who eagerly anticipate the onset of a 'Congress-mukt Bharat.' I am not one of them. If anything, there are four reasons why the decline of the Congress is a matter of national concern.

First, the absence of an effective Opposition usually ends in a ruling party becoming arrogant, complacent, or both.

Second, a Opposition party can be an idea factory, offering fresh solutions to problems.

Third, an Opposition party is a safety valve, allowing the disaffected to let off steam in a controlled manner. Those are the general principles applicable across democracies.

Fourth, and specific to India, who will occupy the Opposition space if the Congress goes up in smoke?

Look at the 16th Lok Sabha. Beyond the BJP and the Congress, all we see are regional parties, incapable, individually or collectively, of managing the contradictions of governing India.

The AIADMK is the third largest formation in the House of the People. Not only is its very name misleading but its history is a perfect example of regional parties choosing to become bonsai rather than soaring trees.

The 'AI' in its name stands for 'All India', a joke given that all its 37 MPs represent constituencies in a single state, Tamil Nadu. But even the 'D' -- 'Dravida' -- is simply not true.

Let us step back a little in time. Telugu, Tamil, Kannada, and Malayalam are obviously related tongues. But there was no specific name to identify this group until 1856, when Robert Caldwell published A Comparative Grammar of the Dravidian or South-Indian family of languages. (Dravidian languages are actually spoken not just in South India, but as far away as Pakistan and Nepal -- Brahui and Kurux respectively.)

Caldwell meant all of South India when applying the term 'Dravidian'. Wh at have the two 'Dravidian' parties -- the DMK and the AIADMK -- made of this heritage?

On August 15, 1947, Madras was the largest province by area, and it elected 75 MPs to the first Lok Sabha, second only to Uttar Pradesh.

Tamil chauvinism, fostered by the nascent 'Dravidian' movement, incited Telugu-speakers to demand a separate Andhra; that was rapidly followed by Malayalam-speaking Malabar joining Travancore-Cochin to form Kerala, while the Kannada-speakers of the west coast and in Bellary united with Mysore (now Karnataka).

Far from aiming to represent all of South India, perhaps even stretching their wings to Maharashtra and Goa (which are not culturally dissimilar) the 'Dravidian' parties have shrunk their horizons, looking no farther than Tamil Nadu.

This is not unique. The records of the Election Commission inform us that the full title of the Trinamool Congress -- the fourth largest party in this Lok Sabha -- is the 'All India' Trinamool Congress. Mamata Banerjee's party is as misnamed as that of Jayalalithaa.

'Trinamool' means 'grassroots', but you won't find even a wisp of the party outside West Bengal.

The Nationalist Congress Party's nationalism is limited to Maharashtra. The larger 'Samaj' outside Uttar Pradesh has no great regard for either the Samajwadi Party or the Bahujan Samaj Party.

Nitish Kumar was often touted as a future prime minister. But has anyone noticed how he behaved?

In his own state he asked whether people wanted to be governed by a Bihari or a 'Bahari' ('Outsider'). And so, inevitably, Nitish Kumar's influence is restricted to Bihar.

The only party apart from the BJP and the Congress to be a major factor in more than one state is the CPI-M. Yet it would be just as correct to say that the current incarnation of the CPI-M is an alliance of three regional parties, based in Kerala, West Bengal, and Tripura.

Look at the last round of assembly polls; the Marxists fought the Congress in Kerala but colluded with it in West Bengal.

A history of short-sighted decisions by the concerned parties themselves have confined them to specific states. Assume that they somehow manage to form the fabled 'Third Front'. Assume also that they win enough seats in a general election to form a ministry. Can they govern?

History gives no cause for optimism. The Janata Party was a hastily cobbled alliance of the Congress-O, the Jana Sangh, the Bharatiya Lok Dal (itself a merger of smaller parties), and the Congress for Democracy immediately after the Emergency.

The National Front came together after the fall of Rajiv Gandhi's ministry in 1989. The United Front was assembled after the 1996 polls.

On each occasion the second prime minister was toppled within months by the Congress withdrawing its support.

Does anyone think a fourth unstable coalition is a good idea?

Right wing policies do not hold the answer to every problem any more than leftist prescriptions offer a universal panacea.

Like it or not, the Congress is still the only party with the potential to challenge the BJP at a pan-Indian level. It has a philosophy of broadly left-of-centre policies to draw upon.

But is it ready for the challenge?

After the 2014 debacle Sonia Gandhi asked A K Antony to prepare a report on where the Congress went wrong. Delivered to the party president in August 2014, my old college mate discussed anything and everything bar two issues -- dynastic rule and corruption.

Except, of course, that it is not harmless. Every year of delay in reforming the Congress causes it to decay even more. India needs an Opposition, but regional parties can't provide it and the Congress won't provide it. 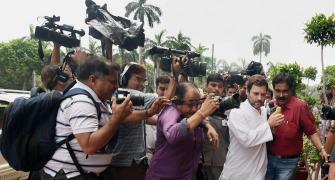 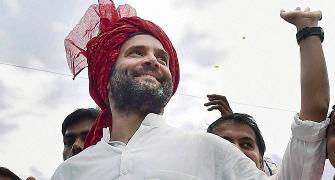