Despite receiving so much love from Gujarat, Modi didn't bother to visit the bereaved parents of those 22 children who lost their lives in Surat, points out Jyoti Punwani. IMAGE: Children try to escape the fire that engulfed a coaching class in Surat, May 24, 2019. Photographs: PTI Photo

Two days after 22 teenaged students perished, in class in the most gruesome manner, the prime minister-elect visited the state where this tragedy took place, which also happens to be his home state.

His 13-year-long rule there, which gave rise to the carefully built up myth of the 'Gujarat model', was one of the reasons he was voted as PM in 2014.

This time too, all 26 constituencies of his state voted for him.

Despite receiving so much love from the State, Narendra Damodardas Modi didn't bother to visit the bereaved parents of those 22 children.

The aerial distance between Ahmedabad, where Modi landed at 6 pm, and Surat, is just 210 km.

The PM paid his respects to the tallest statue in the world, which has been erected because of him, and to his mother; visited the BJP office there, and addressed a victory rally.

At the rally, the PM spoke of the close bonds he had with the people of Gujarat, but he refrained from making that one gesture which would have meant so much not only to the families of the children who died because of criminal negligence by the Surat authorities, but also to the entire state.

Even a late night visit to just a couple of families would have sufficed; and might have also sent a message to the Gujarat government to punish those responsible for the incident.

His visit would have also made for great optics. 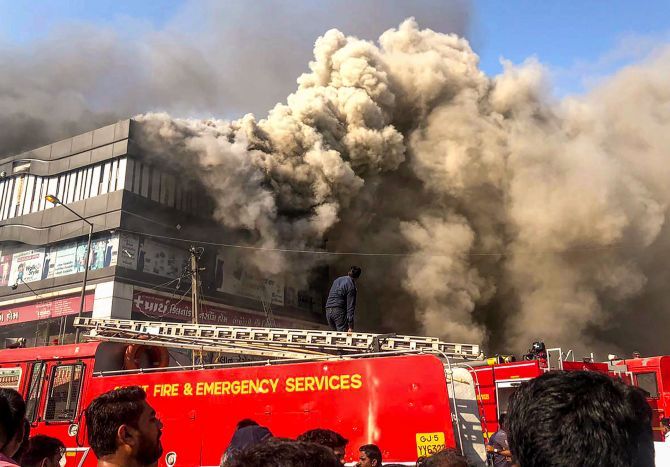 IMAGE: The fire engulfs the commercial complex in Surat on May 24, 2019.

It's worth recalling that a video of Modi supposedly speaking to the widow of a CRPF jawan killed in the February Pulwama blast went viral during the election campaign.

The video showed the tearful young mother initially tongue-tied, but after hearing the PM's kind tone, becoming bold enough to call him 'Bapu' (father) and offering to make 'dhokla' for him.

The video was accompanied by this emotional description: 'Have you ever seen a Prime Minister, who himself calls the martyr's wife and tries to wipe her tears like a father. Will get tears in your eyes after watching.'

Turned out the video was fake.

The call was made in November 2013, after a bomb blast had killed six persons at a rally which Modi, then only a prime ministerial candidate, had addressed during his election campaign. The young woman's husband had died in the blast.

But that little fact hardly mattered to the WhatsApp groups set up across the country early this year to influence voters into bringing Modi back.

The 24/7 propaganda spread through them focused on three things: Building up a cult around the PM; ridiculing those actively opposing him; and spreading untruths about Muslims, Christians, and the Gandhi family, Nehru downwards (interestingly, Indira Gandhi was rarely mentioned despite the Emergency).

This creation of a cult took various forms. Some posts elevated the PM to the status of a deity; others showed groups of people exercising to the beat of 'Modi Modi' or singing bhajans to him in trains.

These WhatsApp videos were the reason villagers in eastern UP, unhappy with their near-joblessness and despondent about future prospects, told a reporter they would vote Modi because he had raised India's image in the world.

Perhaps it is because of these videos that, towards the end of the election, the PM began getting a rock star-like reception at his rallies, with young people chanting his name non-stop and swaying as he asked them to repeat some inane phrase after him. IMAGE: Trapped students in the building.

By the time it was time to vote, the cult had not only been created, it had successfully delivered too.

Could that be the reason the PM didn't visit the bereft parents of Surat: there was no need for any more optics?

This cult has led to two dangerous developments.

One is the suspension of disbelief even among highly educated people. Just one example will suffice.

The day after the result, a video started circulating in these groups showing Muslims in Varanasi taking out a celebratory rally with BJP flags.

The very next day, the same video was circulated, but this time, it was described as Muslims from Mumbai's Bhendi Bazar. Obviously, one of the videos was fake.

However, when this discrepancy was pointed out in a WhatsApp group of highly qualified professionals, they retorted: 'So what? The location doesn't matter; the spirit shown in it is what's important.'

The second dangerous outcome is the argument being made today by the PM's followers: The country has overwhelmingly elected Modi, so no one now has the right to criticise that choice.

Forget the surrender of independent institutions such as the Election Commission, the RBI, most of the electronic media.

Just this one attitude shows how threatened our democracy itself is today.

Its core idea -- that citizens are free to dissent, even if they are in a minority -- is being negated by people who have graduated from the finest institutions.

Post-results, these WhatsApp groups have not wound up. One more target has now been added: Mahatma Gandhi. His assassination is being justified in myriad ways.

While the Modi cult continues, with his Kedarnath pictures being used to show his spiritual nature, the ridicule of Opposition leaders has sunk to new lows.

Post after post shows these leaders reduced to doing menial jobs on the streets; one even shows Kejriwal sweeping the street as Modi strides across it. And this verdict is being hailed as 'post-caste'!

In a revealing comment, the man responsible for this social media exercise in West Bengal told television reporter that to avoid being booked by the cyber security cell for their propaganda, they depended only on WhatsApp.

The kind of communal and sexist venom spread in these WhatsApp groups could have earned their administrators many nights in prison, but who would complain?

Since May 23, there has been a lot of talk about how social media must be used by those who want to fight all that the BJP stands for.

But who has the resources to counter this kind of sustained, minutely-conceived creation of a personality cult?

Secondly, can those opposed to the BJP stoop to such levels? But if they don't, will they succeed?