Why 'civil war' in Karachi could destabilise Pak 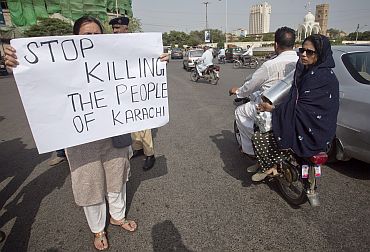 The civil war-like situation in Karachi continues without respite. Seventy-three persons belonging to different communities and religious sects were reported to have been killed -- many of them in targeted shootings and some kidnapped and tortured to death --during four days of fresh violence between August 16 and 19. The level of violence considerably came down on August 20.

The deterioration in the situation has been partly the outcome of the alleged action of the government in releasing the leaders and cadres of the anti-Altaf Hussain MQM (H) who had been arrested and jailed by Pervez Musharraf when he was the President as part of a secret deal with Altaf under which the MQM observed restraint in Karachi in return for the jailing of Altaf's opponents in the Mohajir community.

The MQM of Altaf sees the release of Altaf's Mohajir opponents by the PPP-led government as a revival of Benazir Bhutto's policy (1988-90 and 1993-95) of pitting the MQM (H) against the MQM in the streets of Karachi.

The present spell of violence, which started as business and smuggling related clashes between the Barelvi Mohajirs of the MQM and the Deobandi Pashtuns of the ANP, has since assumed a wider dimension with Mohajirs killing Mohajirs. The ethnic and sectarian strife, which one saw at the beginning of the present spell of violence, has been aggravated by gang warfare between rival Mohajir mafia gangs.

It is pure and simple criminal violence not motivated by any political ideology or religious goal. The violence is about who controls the mafia economy of Karachi. There have been increasing demands for army intervention since none of the groups involved in the violence has any confidence in the police, which is controlled by Rehman Malik, the interior minister belonging to the PPP.

The demand for army intervention has come from the Mohajirs of the MQM, who allege that there has been Taliban infiltration into Karachi under the cover of the ANP, the Pashtuns of the ANP, who look upon the violence as the result of the Mohajir mafia warfare, the Balochs, who find themselves caught in the violence between the Mohajirs and the Pashtuns, the Barelvi organisations and all major business organisations.

The only organisations not in favour of an army intervention are the PPP, the Sindhi nationalist parties, the MQM (H) and the PML (N). The army, while expressing its concern over the continuing violence, has said that it is for the civilian government to deal with the situation.

The latest round of violence has targeted the police. A bus carrying police officers in mufti was attacked killing four of them.

The death of an air force employee has also been reported, but he was reportedly on a private visit to Karachi. The army, the air force and the navy have not so far been targeted.

The attack on PNS Mehran, the headquarters of the naval air wing in Karachi in May, was not related to the ongoing ethnic and sectarian violence. It was a pure and simple terrorist attack in which the Tehrik-e-Taliban Pakistan was suspected.

Sections of the Pakistani media have carried highly pessimistic accounts of the situation in Karachi -- with the Dawn of Karachi even saying that Pakistan is unravelling.

Pakistan is not unravelling. The cycle of violence in Karachi -- sometimes up, sometimes down -- will continue, but none of the contending parties is likely to force a strategic confrontation, which could lead to the destabilisation of Pakistan.

Periodic tactical confrontations will continue till the policing of Karachi improves and the criminal-politician and criminal-police nexus is broken. That is not for tomorrow.

Image: A social activist holds a placard along a road in Karachi 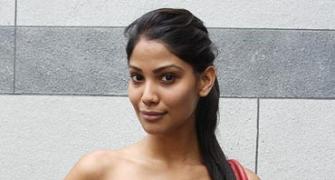 Modelspeak: Fat people can be beautiful

Oppn parties to protest on Aug 23 on corruption