Why civil-military conflict is GOOD for India

The ongoing dispute between General V K Singh and the government is an important -- albeit costly -- test of policy and institutional efficacy in an area of governance that is normally hidden from public view, feels Dr Sunil Dasgupta, co-author of the acclaimed Arming Without Aiming: India's Military Modernization.

Civil-military disputes may be unseemly and potentially perilous to democracy, but Indians should welcome the feud between Indian Army chief General V K Singh and the Manmohan Singh government.

With India no longer in danger of a military coup, the disagreement is an important --albeit costly -- test of policy and institutional efficacy in an area of governance that is normally hidden from public view, often in the name of secrecy.

The seeming scandal bolsters the twin requirements of any national security system: Verifying the principle of civilian control over the armed forces even as it brings scrutiny to the mechanism of providing for defence.

Military officers, by virtue of their expertise and avowed apolitical character, can and do appeal directly to the people over the heads of their political masters. Political leaders, in turn, often leave the management of defence to professional military officers, both to avoid hard decisions about a subject matter rife with uncertainty and to shift the responsibility if things go badly.

Consequently, most civil-military disputes follow a similar script: The military leader accuses the politician of sacrificing the country's security, sometimes with charges of corruption, and the political leader accuses the general of breaching rules that undermine the oath to serve and protect.

There is, of course, no absolute standard of national security. It is a relative concept. Governments try to match military threats with capacity. Doing less can invite attack. Doing more imposes an unnecessary burden on the nation. In most countries, military and political leaders differ over how much defence is necessary.

The question of how much defence India should have against China is debatable, but there is good reason for the relative positions of the two countries today: Military capacity has followed strategic policy. That China is militarily superior to India was established in 1962; confirmed in 1964, when China acquired nuclear weapons; and consolidated since 1979, when China launched its economic reform programme that turned the country into the fastest growing economy in the world.

India has periodically contested Chinese military superiority, and may do so again, but since the mid-1980s, New Delhi has sought detente with China. The Manmohan Singh government has continued a China policy that even the Bharatiya Janata Party-led government, under Atal Bihari Vajpayee, adopted. It is hardly surprising, then, that successive Indian governments have tried hard not to cast its developing relationship with the United States as anti-China.

Many Indians chafe at the idea of a detente with China, but these are not the people who run for elections. Politicians, regardless of their party, have decided repeatedly that it is better to have detente with China.

Not only China, India's elected officials have generally seen India's security environment as relatively benign; thought of armed force as an unacceptable instrument of State policy (with some notable exceptions, such as the 1971 war); sought to escape regional security dilemmas rather than engage in arms racing; and given priority to economic development over military spending.

The assertion by General Singh that the Indian tank fleet is 'devoid of critical ammunition' seems like criminal neglect, but when is India going to fight another tank battle?

The border with China is not tank terrain. Pakistan has nuclear weapons and has repeatedly said that it will use nuclear weapons if Indian tanks cross the border. Indian leaders have wisely chosen not to test whether that is an empty threat.

General Singh also claims that the India's air defence is '97 percent obsolete' -- how does anyone arrive at such a measure and what does the Indian Air Force have to say about it?

General Singh's letter mentions other, more credible gaps in the army's capacity, but, by all publicly available accounts, he does not lay out his priorities, without which it is impossible to determine how bad things really are. For example, the question of whether the tanks lack necessary ammunition cannot be answered without first answering the question of how many tanks India needs. In the melee following the leak of General Singh's letter, this remains unanswered.

The content of the March 12 letter should never have been surprising. For a number of years, Indian and foreign observers have been highlighting deep-set problems in India's defence policymaking. I would imagine that General Singh's predecessor and successor would write very similar letters, if they were asked.

What makes the letter extraordinary is the fact that it is not a routine matter for Indian military chiefs to write frankly to the country's prime minister on the state of readiness. That is the only acceptable explanation for why the letter has caused national consternation in India.

The alternatives are scandalous: Did General Singh write to the prime minister earlier, and was he ignored? Or, did the Army chief's date-of-birth problem cause him to be more critical of the government? The general has been willing to name names of those who tried to bribe him, but far more important evidence will be his prior reports on military readiness to the government, if ever these could be made public.

The problem in Indian defence goes beyond resources. Unlike other areas of government neglect such as school education, basic health care and road safety, defence has not suffered from the lack of resources.

For much of the last decade, Indian defence budgets have grown handily. There are reports that the armed forces are not being able to spend the money fast enough -- and the military has actually returned unspent money to the General Fund of India.

The dysfunction in Indian civil-military relations has its roots in the lessons of the defeat in the 1962 China war. India stumbled into and lost the war because of political interference. Since then, Indian political leaders have been wary about intervening in military issues.

The 1971 Pakistan war confirmed the military autonomy model, but since then few political leaders have taken a direct interest in military matters. The fear of intervention combined with the belief against the utility of armed force in politics resulted in political disinterest in military matters. All the political leaders wanted to do -- and were expected to do -- was to provide the resources and get out of the way.

But, of course, the politicians did not really leave the military alone even as they stepped back from publicly intervening in military matters. Instead, they installed a thick layer of bureaucracy to exercise proxy civilian control. There is now consensus outside Indian government circles that the bureaucratic insulation between the politicians and the generals does not serve India well.

Without regular and frank exchange of civil and military views, it takes civil-military conflict to break the news of dysfunction. Civil-military disputes can help correct imbalances in the national security policymaking system.

All other military reforms -- from the new position of the chief of defence staff, to a more effective military R&D system, to a clean and legitimate procurement process -- are predicated on political engagement of the military that usually follows a period of civil-military tension.

Whether this round of civil-military tension will lead to a period of reform in India is not yet clear.

The Indian government's first instinct seems to be to let this wind blow over with Singh's retirement on May 31. General Singh's own credibility is poor given the controversy over his date of birth.

But as more scandals arise, a new constituency for defence reform is bound to emerge and the country's political leadership will not be able to remain disengaged from military matters for long.

Sunil Dasgupta is director of the political science programme at the Universities at Shady Grove, part of the University of Maryland, and a non-resident senior fellow in foreign policy studies at the Brookings Institution in Washington, DC. 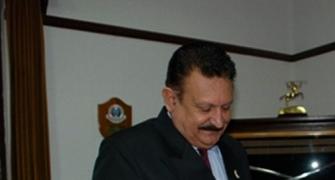 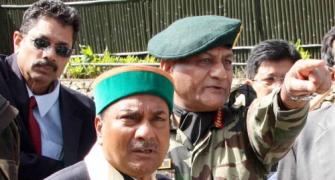 Why India's defence preparedness is hollow