News
Business
Movies
Sports
Cricket
Get Ahead
Money Tips
Shopping
Sign in  |  Create a Rediffmail account
Rediff.com  » News » Who after Anbazhagan in DMK?

The front-runner of course is party treasurer and long-serving party legislator, S Duraimurugan. A Vanniar by caste from the rival PMK-strong northern belt, Duraimurugan makes up for his weak political grounding through his debating skills in the assembly, and witty repartee, both inside and outside.

Apart from caste and regional representation, personal loyalty to the leader would count even more  -- but there is no death of loyal and competent candidates in the party for the post, says N Sathiya Moorthy. 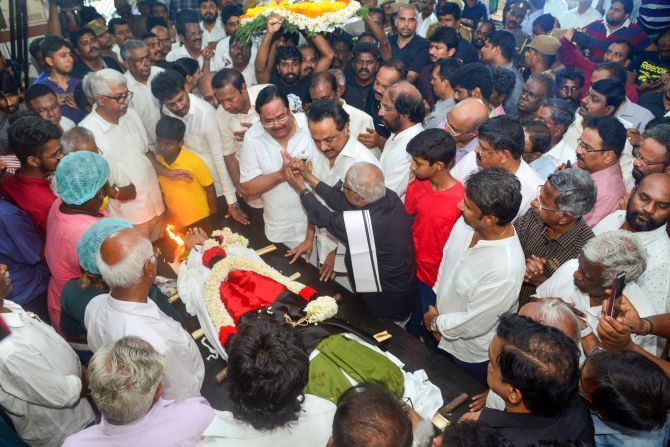 The death of octogenarian K Anbazhagan over the weekend may have removed a Dravidian political veteran from the scene, but truth be acknowledged, it has not left a void that his Dravida Munnetra Kazhagam could not fill in terms of his position as the party’s longest-serving general secretary.

What cannot be filled, however, is the ideological mooring that Anbazhagan used to lend to party president and five-time chief minister, Muthuvel Karunanidhi, until the latter’s death in March 2018.

Anbazhagan, unlike what many outside of Tamil Nadu believe, was older to Karunanidhi by a year and was 97 (date of birth: December 18, 1922). There is one other political leader who is as old as him, and that is neighbouring Kerala’s former CPM chief minister V S Achuthanandan (DOB: October 20, 1923). The Bharatiya Janata Party veteran L K Advani is way younger at 92.

Fondly addressed as ‘Periyappa’, or ‘older uncle on the father’s side’, by incumbent DMK president M K Stalin,  Anbazhagan was ‘Perasiriyar’, or ‘Professor’ for party cadres, for his forgettable short stint as a college tutor in his younger days, this post-graduate in Tamil literature. Given his silent but strong commitment to what is freely branded as ‘Dravidian ideology’, Karunanidhi used to address him as (Tamil) ‘ina mana perasiriyar’, touching upon Anbazhagan’s commitment to his larger, ethnic cause.

Another fact that not many even in the state do not know was that both Karunanidhi and Anbazhagan came from the same south-central neighbourhood, the temple town of Tiruvarur. Karunanidhi succeeded DMK founder C N Annadurai as chief minister following the latter’s untimely death in 1969, took over the party mantle of general secretary, too, not long after and modified the party constitution to create a new post of party president, with most powers.

If Karunanidhi became the longest-serving party chief in any democracy, elected in a seemingly democratic way, a total of 49 long years, Anbazhagan became general secretary in 1978, after estranged V R Nedunchezhiyan left the DMK after the party’s twin rout in the post-emergency Lok Sabha polls and later state assembly polls, both in 1977.

Through thick and thin, Karunanidhi and Anbazhagan travelled together as an inseparable political twin of sorts through the MGR years and the subsequent Jayalalithaa era, until death did separate them after the former’s exit in 2018. Given his declining health, Anbazhagan, who had served as a Rajya Sabha member for a term, did not contest the post-Karunanidhi assembly polls of 2016, but it was also to give Karunanihi’s son and political heir, Stalin, a free hand in the affairs of the party.

In this background, the question is if Stalin would choose to fill the vacancy created by Anbazhagan’s death immediately or wait for the party’s general council to re-elect him as president, at the end of the ongoing organisational elections, which will climax in mid-September. Following Anbazhagan’s continual illness and his incapacity to be around and active, Stalin had got the party constitution amended to confer on the president most powers of the general secretary, especially in times of a vacancy to the post.

The front-runner of course is party treasurer and long-serving party legislator, S Duraimurugan. A Vanniar by caste from the rival PMK-strong northern belt, Duraimurugan is however weak electoral foil for the PMK’s father-son Ramadoss duo in politico-electoral terms, but he makes up for all of it and at time more through his debating skills in the assembly, and witty repartee, both inside and outside.

If Duraimurugan is elevated, then Stalin would be left to look around for a party treasurer, again a once prestigious post that he had held for a decade before the incumbent. Apart from caste and regional representation, personal loyalty to the leader would count even more  -- but there is no death of loyal and competent candidates in the party for the post.

Anbazhagan belonged to non-Brahmin upper-caste Mudaliar community to which long-forgotten predecessor Nedunchezhiyan and DMK founder Annadurai, among other front-liners, belonged. The Mudaliar community, concentrated mostly in the north, along with the southern Saiva Vellalars and Nattukkottai Chettiars, formed the Tamil backbone of the Dravidian movement from the inception of the Justice Party forerunner with succession of Telugu leaders and chief ministers of what was then Madras Presidency under the British Raj.

Anbazhagan’s family members had stayed away from politics. However, a section of the social media is already abuzz with suggestions that a family member may be offered one of the three Rajaya Sabha seats for which elections have since been announced. The DMK has already named three candidates, so will the ruling AIADMK, which is expected to take the other three seats falling vacant.

It is still likely that if there are one too many claimants -- of whom there are not many just now -- Stalin may still have  an option to postpone the organisational elections after a point, until after the assembly polls, due by May next year. A lot will depend on groupism and infighting that is present in every political party, big and small, which as the political Opposition that has swept the Lok Sabha polls last year, the DMK just cannot afford to have, ahead of the even more critical assembly elections.

Yet, given the peculiar  circumstances in which the succession war in the DMK culminated in Stalin putting aside elder brother M K Azhagiri with their father’s blessings long before Karunaidhi’s death, followed by his semi-retirement and that of Anbazhagan as general secretary, the power transfer was as smooth and as formal/informal as it could have been.

It is here the DMK and Stalin have scored over the ruling AIADMK rival, where the late Jayalalithaa as chief minister and party supremo refused to read the writing on the wall as her health declined constantly over years, months and days -- yet, would not have a succession plan.

This meant that Jayalalithaa left the party in utter turmoil and a succession war, until the Supreme Court verdict in the ‘assets case’ put eternal challenger and live-in aide Sasikala Natarajan behind bars.

Today, Chief Minister Edappadi K Palaniswami, even while starting off tentatively as Sasikala’s shadow-CM first and independent of her and as a challenger, has completed three full years in office despite multiple factions working against him from within and the Opposition DMK seeking to unsettle him in the state assembly through no-trust motions.

And this, he has achieved, with cooperation from one-time challenger and current deputy, O Panneerselvam and despite losing last year’s LS polls very badly, that too in the company of the BJP ruling the Centre with his ‘Modi magic’ at the helm and other allies like the PMK and DMDK of ailing-failing actor-politician Vijaykanth, among others. 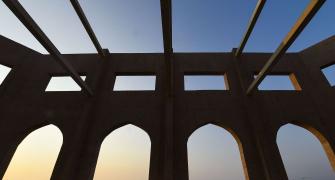 Congested Bhendi Bazaar in Mumbai gets a new look 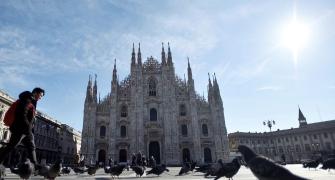 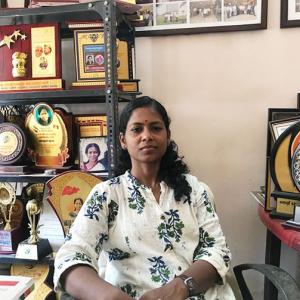