'Zund makes one sit up and wonder why we have allowed ourselves to be played like pawns by power mongers,' says Neeta Kolhatkar.
Illustration: Uttam Ghosh/Rediff.com It is also the name of a new Marathi play that opened in Mumbai this weekend. It holds a mirror to the tragedy that has been increasingly, dangerously unfolding across India in the past few years -- mob mentality.

It looks at how the majority -- especially upper caste Hindus -- behave and dictate the agenda, be it in society or in the newsrooms.

As you watch the main lead characters, you begin to identify the prominent faces in the media who propagate the agenda of the new government. 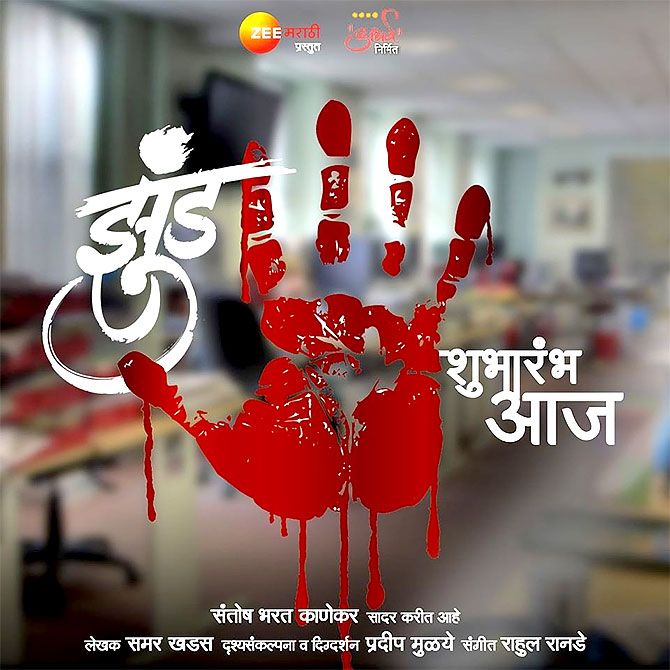 Written by senior journalist Samar Khadas, the play depicts the political agenda that is being dictated to, and followed in, our newsrooms.

It looks at the dominance of upper caste editors and decision-makers as well as the handful of journalists who belong to the Dalit, Scheduled Caste and Muslim communities and how they remain on the periphery.

It shows how strong socio-political influences dictate news agendas and interactions and sows suspicion in the minds of colleagues.

When you widen the horizon, you see that it reflects our society today.

We have seen this in the case of lynchings, when mobs unleashed violence on mere suspicion and carriers of meat -- mainly Muslims or members of the lower castes -- have been killed.

The point the playwright is making is zund, or a mob mentality, is not just about tragedies like lynchings that can lead to physical death. It is also about the way those in power mentally torture those who are in the minority.

The upper caste, the majority, imposes their will on those in weaker situations, compelling them to fall in line with the prevailing agenda or face severe consequences. The play also focuses on historic truths backed by research and historical references. In one section, the author highlights the Kafkasque tragedy that exists in India by highlighting the main plot of The Trial by Franz Kafka.

In this case, the lead character, a journalist is targeted because he belongs to a specific community.

The fact is most of us mutely read about mob lynchings; many of us allow suspicion to creep into our minds about those who are not like us.

The same unfolds in the newsroom.

A journalist questions the prevailing condition in the newsroom and questions the editor for ignoring pertinent issues like farmers's distress and the atrocities against Dalits and Muslims in particular. Obviously, this is not appreciated by either the editor or the management and he is targeted.

Just like society has remained silent in the case of mob lynchings, a similar science exists in newsrooms today.

The extent to which this happened, and all who have mutely watched and not written about it or aired it are also integral to this zund, this mob mentality whose silence has allowed many to die and, worse still, allowed hatred to snap the fine ties that once wove our society tightly together.

The media has a huge role to play in allowing popular agenda to be dictated.

The rabid talk in newsrooms, strong casteist sentiments driving popular news and contemptuous beliefs about all but their own caste is brought out well in Zund. The play also highlights the sham of 'good news' that was started by a leading newspaper.

The fact our news is dictated by popular days like Valentine's Day, Sparrow Day and other such Days, and the fact that social issues that can change socio-political dynamics are shoved into the inside pages hits us more when we see it unfold on the stage.

Director Pradeep Mule, who is also a master of set design, has used the three room concept rather well.

The actors have performed passionately and their emotions resonate with us.

The play makes one sit up and wonder why we have allowed ourselves to be played like pawns by power mongers.

Senior journalist Neeta Kolhatkar does not mince words when she writes about politics, crime and the common man.