Prime Minister Modi needs to call Biden next month and say: 'Mr President, the threat from China is clear and present.'
'We, in New Delhi, have determined it to be an urgent national priority to outfit our submarines and aircraft carriers with nuclear propulsion and we want to cooperate with America on this programme,' advises Ajai Shukla. 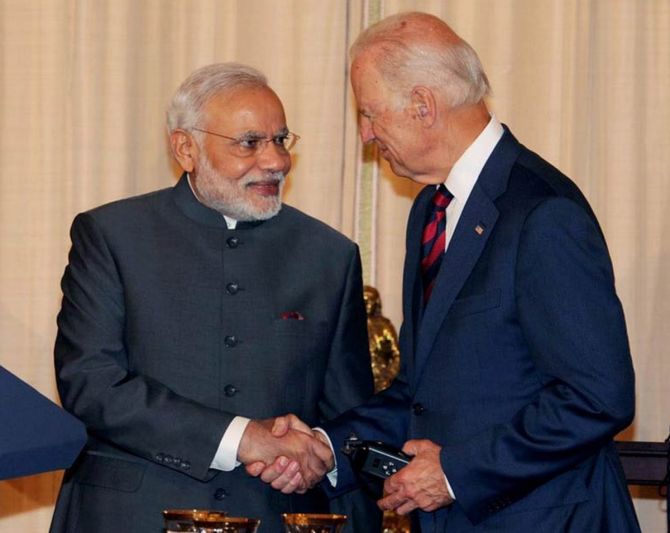 Over the past two decades, there has been a strengthening bipartisan consensus in Washington on the need for a strong, multi-faceted strategic partnership with India.

That has even weathered (so far at least!) India's turn towards political authoritarianism, majoritarianism, and erosion of the personal freedoms that the US holds dear.

Consequently, the transition in January from Donald Trump's presidency to that of Joe Biden is likely to bring about changes only of style, rather than substance, in the defence relations between New Delhi and Washington.

Underlining this growing closeness are two recent developments against the backdrop of the ongoing Sino-Indian face-off in Eastern Ladakh.

First, the navy chief confirmed the lease of two MQ-9B Sea Guardian unmanned aerial vehicles from the US firm General Atomics, and those have been flying 33-hour missions since early November to track Chinese submarines and warships in the Indian Ocean.

The military has been pushing to buy 30 of these High Altitude, Long Endurance (HALE) drones, but their high cost has held back this purchase.

Now, a solution has been found, with the US department of defense (the Pentagon) facilitating the lease of two Sea Guardians, along with US personnel for maintenance and training.

On its part, New Delhi has promulgated a new acquisition procedure that allows for leasing equipment.

Further, to use the Sea Guardian effectively, New Delhi has signed the one remaining 'foundational defence agreement' -- the Basic Exchange and Cooperation Agreement on Geo-Spatial Intelligence (BECA) -- which enables Indian platforms to use high-accuracy US mapping. The two countries have clearly coordinated closely on operationalising the Sea Guardian.

Simultaneously, citing the Logistics Exchange Memorandum of Agreement (LEMOA) -- another foundational agreement that was signed in 2016 -- New Delhi approached the US for 11,000 sets of extreme cold weather clothing for Indian soldiers who are confronting the Chinese in Ladakh.

For years, New Delhi hesitated to sign the foundational agreements, fearing they would bind India too closely to America. Now, with their utility being proven in operations, New Delhi is not holding back.

More effective US-India cooperation is also being facilitated by stationing an Indian military officer in the Bahrain headquarters of US Naval Forces Central Command (NAVCENT).

This is all very different from the defence relations five years ago when senior US officials, who had flown down from Washington to New Delhi, would sometimes be told after landing that their meeting had been cancelled as their ministry of defence counterpart was 'busy'.

Even so, America remains the only one of India's significant defence partners that is not embedded, or participating, in a weapons co-development programme that New Delhi considers 'strategic'.

The Israelis are cooperating with India's Defence Research & Development Organisation in the super-sensitive field of ballistic missile defence; the French are helping modify Indian Air Force fighter aircraft to deliver nuclear weapons, and in building conventional submarines, while the Russians play a big role in India’s nuclear submarine programme.

The US, however, has no comparable strategic initiative.

Nor has the much-hyped US-India Defence Trade and Technology Initiative made any headway in its stated mission to facilitate co-development and co-production of military kit.

Sceptics in New Delhi accuse the US of being content with ringing up arms sales and having no inclination to share 'strategic' technologies with India.

However, the fact is that New Delhi has never seriously tested American willingness to cooperate in strategic projects.

A field for cooperation is readily at hand: The US is the world's leader, by a distance, in marine nuclear propulsion. Meanwhile, India's navy and the DRDO are struggling to develop a reactor for Indian submarines and have been frustrated in building a nuclear-powered aircraft carrier.

Working-level Indian officials have proposed to their American counterparts that they assist India in this field. However, strategic cooperation of such an order is never requested, nor processed, at the working level.

US government policy since the 1950s has forbidden military nuclear cooperation with other countries, except for limited projects with its closest allies, the UK and France.

Any change to this longstanding policy would only be considered after a request at the highest political level.

Putting it bluntly, Prime Minister Narendra Modi needs to dial up Biden next month and clearly say: 'Mr President, the threat from China is clear and present. We, in New Delhi, have determined it to be an urgent national priority to outfit our submarines and aircraft carriers with nuclear propulsion and we want to cooperate with America on this programme.'

Modi must remind Biden that America's goal of expanding multilateralism in the Indo-Pacific includes a pivotal role for a militarily powerful India.

Expanding US-India defence cooperation into the strategic realm would not just serve to make India a capable maritime partner but would also add technological substance to the US-India defence relationship.

Within the Pentagon, there will almost certainly be pockets of resistance to assisting India with marine nuclear propulsion.

But Washington is pragmatic, if anything. Its policymakers and lawmakers could be persuaded that, with a well-funded programme already under way for six nuclear-powered attack submarines, India is already fully committed to this course.

They know that if America denies New Delhi assistance, Moscow will be waiting in the wings, looking for an opportunity to expand its role.

There is a convincing argument to be made that it would be in America's national interests for Indian submarines and carriers to be highly capable platforms, powered by reactors built with US assistance rather than Russian reactors.

A single phone call is not going to trigger the release of US nuclear propulsion technology right away. But it could start an incremental process.

Washington would most likely agree to engage New Delhi in a Marine Nuclear Safety Dialogue. In that forum, further questions could be raised and more Indian requests made as confidence is built.

Years ago, Vice Admiral Ravi Ganesh visited the Pentagon with a mandate from the naval chief to suss out America's position on nuclear submarine cooperation.

When he raised the subject delicately, there was no rejection from any US official. Instead, the question everybody put to him was: 'Where is the official 'ask'from your prime minister? When that comes, we can address it within our system.'

After Indira Gandhi, India's political leadership, with the possible exception of Manmohan Singh, has remained at an arm's distance from defence and strategy, and reluctant to engage directly in matters such as these.

But with the Chinese at our doorstep in cahoots with Pakistan, India needs to gear up its external balancing.

Without entering into any overt alliances, New Delhi needs to ensure that its strategic partners, especially the US, begin delivering strategic benefits that go beyond tactical war games and equipment sales.

When Modi congratulates America's next president after his inauguration, the Indian leader must begin locking the US into a relationship that yields strategic benefits for India. 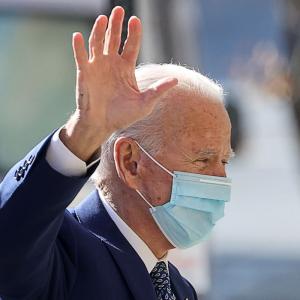