News
Business
Movies
Sports
Cricket
Get Ahead
Money Tips
Shopping
Sign in  |  Create a Rediffmail account
Rediff.com  » News » Modi will have a good relationship with Biden

'The credit for managing Trump should go to Modi.'
'Biden is a predictable and rational person with plenty of administrative experience,' notes Ambassador T P Sreenivasan. 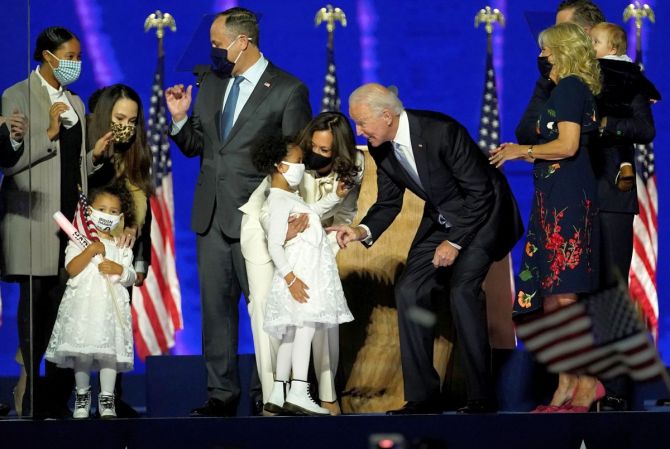 A thunderous sigh of relief has reverberated around the globe that the curtain has fallen on a particularly chaotic period in US history.

A four-year nightmare has ended.

The world's most powerful nation with the best scientific research, particularly in medicine, lies devastated by the coronavirus, its social fabric shattered on account of rising racial conflict, its global leadership challenged, its industrial and commercial foundations shaken, its record of human rights and fundamental freedoms vitiated, its commitment to the post world war architecture founded on multilateralism crumbled, its leading role in the protection and preservation of the environment eclipsed and the bonds of a common security with its allies in shambles.

It was only natural that the Americans voted overwhelmingly for a change.

What astonished the world was that nearly 70 million adult Americans voted for Donald Trump a second time. As Barkha Dutt observed in her article in Foreign Policy, 'that tens of millions of Americans would vote a second time around for a racist, sexist, lying and deluded President' was unbelievable. She also wondered 'How is it that the world's oldest democracy and the largest economy, finds it so difficult to conduct an election.'

The most important question on everybody's mind is whether and how soon President Joseph Biden and Kamala Harris will be able to reverse the present situation.

In his first statement to the nation after his victory was assured, Biden said that they had already commenced work on the most urgent matters of the pandemic and the economic meltdown. In his victory speech, he announced that he was bringing together a group of scientists and others to work out a strategy even before he took office.

The concern at this point is what is likely to happen between now and end January 2021. The nation will be distracted by the statements and actions of Donald J Trump during this period. His niece Mary Trump, who has written an unflattering book on Trump, said that in their family, rejection is treated as a death sentence and that Trump's reaction to such a situation will be unpredictable.

It is also said that he will have to leave the country or go to jail because of the lawsuits he will face from his debtors and other enemies. He has already initiated several cases in many states questioning the legitimacy of the election results and his best hope is to end up in the US supreme court, which has many conservatives and a couple of his appointees as judges.

What other tricks he will play in the next few weeks not to concede the election remain to be seen.

The Biden team has the clear mandate to rescue the country from the havoc played by Trump, but the task will be tough if Trump remains a powerful opposition figure with the blessings of the Republican party.

But the Republicans must have begun to disentangle themselves from him to save the Grand Old Party, which was hijacked by Trump. But those who voted for Trump may not have much loyalty to the Republican party.

Trumpism in some form will be the greatest challenge to the new administration. Every measure that it takes in domestic policy like job creation, taxes, medicare and others will meet stiff resistance.

Foreign policy will not be a high priority for Biden, but international affairs and the summit calendar will exert pressure on him, even though many meetings will be virtual rather than real, involving less travel and protocol till the pandemic recedes.

Many leaders from diverse countries will want to visit sooner than later. Mending fences with the Europeans, Japan, Russia and China and keeping Israel and the Arabs on the path to reconciliation brought about by Trump will be urgent.

Once the secretary of state and the national security adviser are appointed, these will gain momentum.

In a comprehensive Foreign Affairs article entitled, 'Why America must lead again' earlier this year, Biden wrote: 'The next US president will have to address the world as it is in January 2021, and picking up the pieces will be an enormous task. He or she will have to salvage our reputation, rebuild confidence in our leadership, and mobilise our country and our allies to rapidly meet new challenges. There will be no time to lose.'

Alluding to the security in the Indo-Pacific, he said: 'We need to fortify our collective capabilities with democratic friends beyond North America and Europe by with Australia, Japan, and South Korea and deepening partnerships from India to Indonesia to advance shared values in a region that will determine the United States's future.'

India will receive urgent attention in the context of the commitments made by Trump and particularly Mike Pompeo and the emergence of the Quad. Bilateral relations should move on uneventfully on the basis of the new security partnership which will not be disowned by Biden.

The US-India agreement signed during the 2+2 meeting on defence cooperation is not new as it was proposed by the US several years ago. Biden had favored, like Barack Obama, strategic cooperation between India and the United States even when India followed its policy of strategic autonomy.

It was the agreement reached between Obama and Narendra Modi in 2015 that led to cooperation in the Indo-Pacific.

Many in India and some Indian Americans are concerned about certain statements made by Biden and Kamala Harris about Kashmir and Pakistan. But these should be seen as populistic positions taken by politicians out of power.

Once they come to power and receive briefings from strategic advisers, they will speak with authority and responsibility. India-US relations have always been bipartisan in the US.

Another question being asked is, between Trump and Biden, who will be better for India. PM Modi had a great equation with Obama and friendship with Trump was also dictated by national interests on both sides.

Modi was patient with Trump and managed to immunise himself against the words and deeds of Trump at a personal level. He was tough when it came to Kashmir and trade issues. The credit for managing Trump should go to Modi.

He will have no problem in establishing a good relationship with Biden as Biden is a predictable and rational person with plenty of administrative experience.

Biden will also be more liberal on the question of immigration to pave the way for Indian technical experts to work in the United States.

The anxiety continues about Trump's words and deeds from now on. A legal battle is inevitable, but the US simply cannot afford a period of instability and chaos because the administration has many battles to fight, particularly the pandemic.

Biden has stressed in his victory speech that it is an 'inflection point' in US history and that reconciliation and cooperation among all citizens is the need of the hour. 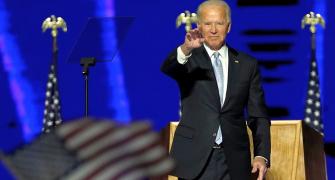 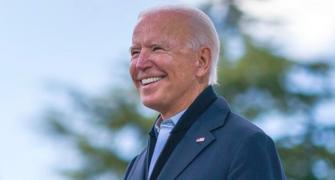 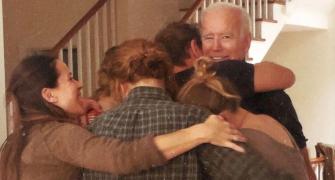 The moment Joe Biden learnt of his win 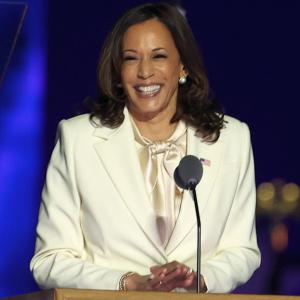 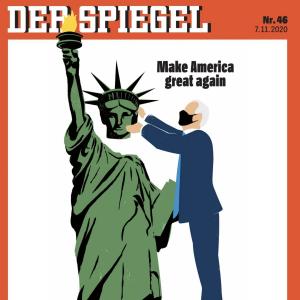