News
Business
Movies
Sports
Cricket
Get Ahead
Money Tips
Shopping
Sign in  |  Create a Rediffmail account
Rediff.com  » News » If The BJP LOSES UP...

An adverse outcome against the BJP in UP can well be taken into its stride by the ruling combine at the Centre, argues Virendra Kapoor. Maybe it is the proximity to the national capital, or because politically it is the most significant, the fact is that of the five states going to the polls UP alone hogs public attention.

Electioneering in Punjab, Uttarakhand, Goa and Manipur altogether features relatively less in the media than the wall-to-wall coverage of the UP campaign.

Yes, UP is crucial for the Bharatiya Janata Party. Failure to retain power can diminish the central government's moral and political authority two years ahead of the Lok Sabha poll.

More materially, it can deny the ruling dispensation a free hand in the June Presidential election.

On the other hand, in the most unlikely event of UP slipping out of the BJP's hands, the blow to the Modi government will be easily absorbed.

An adverse outcome against the BJP in UP can well be taken into its stride by the ruling combine at the Centre.

Of course, this would not have been the case were the Congress to regain its pole position in the largest state in the country which sends 80 members to the Lok Sabha.

As it is, with ever diminishing popular support, Rahul Gandhi misses no opportunity to target the prime minister.

Chances of a half-decent revival in UP would have only made the Gandhi scion go ballistic in launching his Twitter missiles.

Yet, the de facto boss of the Congress, not unlike the social media warriors in his diminishing durbar, seems to make waves in the media rather than on the actual electoral battleground in any of the five states going to the polls.

Before we return to the further marginalisation of the Rahul Congress, let us briefly mention the rather excessive significance being given to the Jat vote in western UP.

In the wake of the recent anti-farm reform agitation, the Jats in western UP had hogged the limelight.

But this should not mask the fact that in actual numbers they are in a minority in comparison to all other castes in western UP.

Besides, from the time of the late Chaudhary Charan Singh, the founder of the Lok Dal, in the mid-1970s, only the land-owning Jats constituted his core strength.

Indeed, the Congress had called Charan Singh the leader of the kulaks whose supporters not only suppressed the lower castes, but physically prevented them from voting in elections.

The point is that only big Jat landlords were part of the anti-farm reforms protest, and the significance of their vote is vastly exaggerated owing to their aggressive opposition to the reforms.

The fact that Amit Shah and Rajnath Singh and other senior BJPleaders are conducting door-to-door campaigns in the Jatland... the fact that Shah met prominent Jat leaders at a Delhi BJP MP's home... that overtures were made to Jayant Chaudhary, the Rashtriya Lok Dal leader... all this may be a part of a carefully crafted strategy.

Appealing to the Jat sense of honour, mollifying community leaders, and also sowing confusion seemed to be the idea in investing time and attention in western UP.

Another Rahul self-goal in Punjab

In Punjab, regardless of what the BJP claims, it is a bit player in the electoral battle where a badly divided Congress has ceded early advantage to the Aam Aadmi Party.

The fallout of the self-goal by the Gandhis in abruptly removing Captain Amarinder Singh from the chief ministerial gaddi, and equally hurriedly anointing the unheralded Charanjit Singh Channi as his successor without reckoning with Navjot Singh Sidhu's ambitions, is still rocking the Congress boat.

A state which seemed easy for the Congress to retain by all accounts seems to be slipping out of its hands.

Still, Rahul Gandhi appears not to have drawn any lesson from the original blunder in Punjab.

Last week Rahul unwittingly walked into the trap set by Sidhu who from the stage insisted that the Congress declare its chief ministerial candidate, here and now.

How the Congress will emerge unscathed from this minefield is hard to see.

Someone like the maverick Sidhu will play havoc if he is not named the CM candidate.

And if he were to be named the CM candidate, what about the 30-plus percent Dalit vote which the Congress had in view when it made Channi chief minister?

Politics is a complex game requiring leadership skills honed daily in the crucible of contradictions and personality clashes.

Those prone to para-drop from on-high occasionally in the hope that their mere presence would cause everyone to fall in line a la members of a uniformed force have clearly not shed their imperial pretensions.

So, thanks to Rahul's tactless assurance, a time-bomb ticks for the Congress in Punjab.

What Defeat in UP Will Mean for Brand Modi 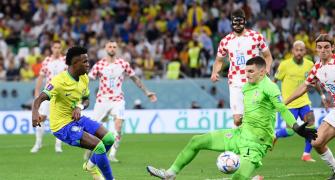 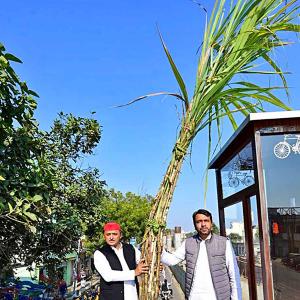 'Akhilesh will surely get 150 seats'