The Gandhis should feel blessed that by sheer luck they have zeroed in on a well-liked and competent person to head the party, argues Virendra Kapoor. 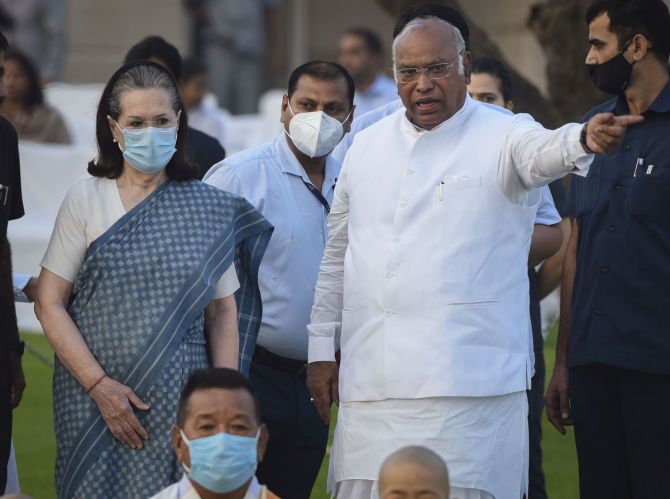 They say the best laid plans of mice and men often go awry.

Well, in the case of the Gandhis of the Congress party they indeed have gone awfully wrong.

A life-long loyalist like Ashok Gehlot took them completely by surprise, foiling the attempt to install the long-suffering Sachin Pilot as chief minister in Jaipur while he was moved to Delhi as an ever-obedient Congress president.

Gehlot, an old-fashioned Congressman schooled in the byzantine politics of intrigue and factionalism, was always careful to hitch his wagon to the top leader at the national level.

Thus, he was rewarded with ministerships in successive Congress governments beginning with that of Indira Gandhi in 1980. Or headship of the Rajasthan Congress at a very young age and later as chief minister.

The former magician took care to keep his ambition under wraps while invariably manoeuvring to achieve it.

But he may have blotted his copy-book, and overplayed his hand while wanting to keep Rajasthan under his belt even as he assumed charge of the Congress party at the national level.

That misjudgment could prove fatal for his five decade-long career.

For, Sonia Gandhi was in an unforgiving mood, unready to condone such an act of ingratitude when Gehlot went to say mea culpa. 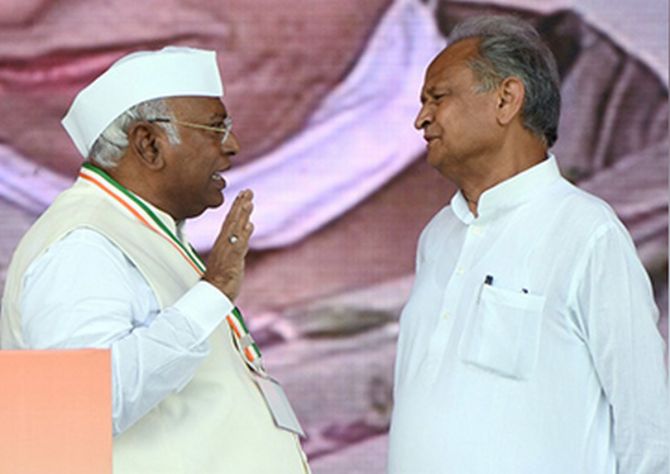 Nearly 100 MLAs loyal to Gehlot in a carefully orchestrated act declined to follow the usual Congress drill of passing a one-line resolution empowering the party high command to nominate the next leader.

They were apprehensive that if so authorised the high command would nominate Gehlot's bete noire Sachin Pilot as chief minister.

But Sonia Gandhi and her children Rahul and Priyanka were committed to make Pilot CM.

They had prevailed on him in 2020 when he along with 20-odd MLAs raised the banner of revolt.

In fact, one major reason to make Gehlot national president was to grant Pilot his ambition.

Now, after the fiasco in Jaipur it is hard to see how Pilot can become CM, especially given that the CLP is overwhelmingly deadest against him.

The rebellion in Jaipur has two clear implications. One, Pilot cannot be CM in this assembly.

Should the high command still insist on foisting him it will risk the loss of government in the only state other than Chhattisgarh where the party is in power on its own.

Two, Gehlot, by choreographing the show of defiance, ruled himself out as Congress president who will heed the 10, Janpath remote control.

Yet, Gehlot cannot be cast aside without jeopardising the stability of the party government in Rajasthan.

So, either he or someone of his choice must be allowed to head the state government till the next assembly election in end-2023.

As for Pilot, he will now have to be accommodated in the Congress organisational structure under a new nominee as party chief.

It is here that we think the Gandhis may have, by sheer default, got the best man under the circumstances to head the party at this troubled juncture.

He is far more articulate than the now abandoned nominee, Gehlot, far more clued up about national and international affairs and by and large enjoys a clean image for a Congressman.

Born a Dalit, and a lawyer by profession, and a Congress politician for over half a century, the 80-year-old Kharge has another important plus: He is proficient both in English and, for a South Indian, in Hindi as well.

Indeed, of all the Congress presidents from the south, -- there have been five in all thus far, including the most effective but mono-lingual K Kamaraj who only spoke Tamil -- it is Kharge who will be by far the most fluent speaker in Hindi, a big asset for a party desperate to reclaim some of the lost ground in the Gangetic belt.

The Gandhis should feel blessed that by sheer luck they have zeroed in on a well-liked and competent person to head the party which they still intend to control after Kharge takes charge formally after going through the motions of a contest.

This is not all. Kharge as Congress chief can help end the bitter factionalism in the Karnataka unit where the state party chief D K Shivakumar and former chief minister Siddaramaiah are at each other's throats.

With the next Karnataka assembly poll due in mid-2023, the tussle over the chief ministership between the two can help the ruling BJP tide over its own crisis of leadership in the state. 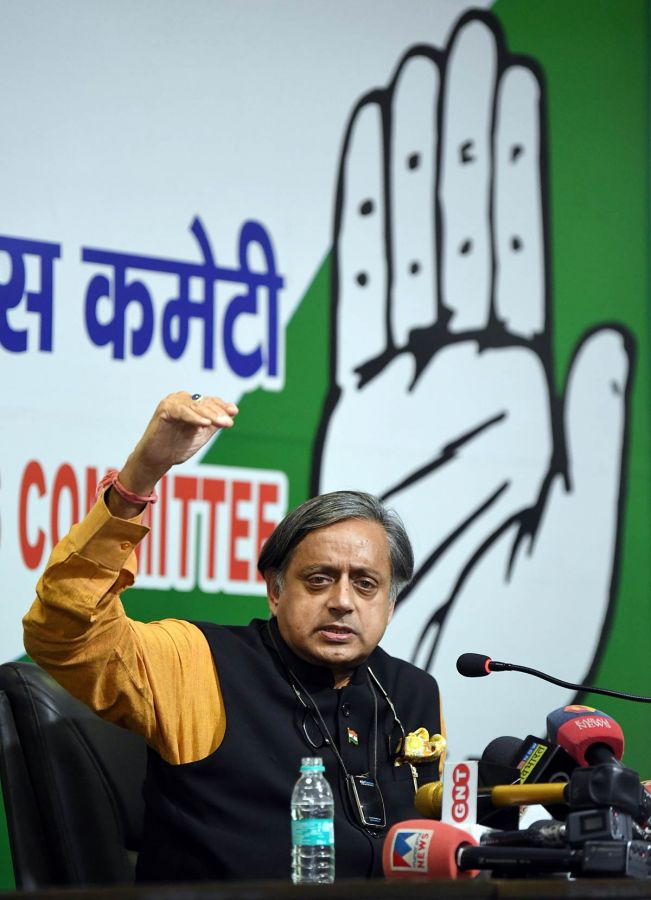 IMAGE: Shashi Tharoor, the other candidate for the Congress presidential election, addresses a press conference in New Delhi, October 13, 2022, on the party presidential poll, which will be held on October 17. Photograph: ANI Photo

Another positive from Kharge's nomination -- for that is what it is even if for the record Shashi Tharoor still appears on the ballot -- is that with him as Congress chief he could come to acquire an agency of his own, stilling propaganda that he is a proxy for 10, Janpath.

Though there is nothing in Kharge's record of over half a century to suggest that he will defy the Gandhis at any stage, having been a loyalist to the leadership all through his long political career.

Even as Rahul Gandhi's Bharat Jodo Yatra meanders its way through the South, in New Delhi, the Congress through a series of missteps and blunders seems to have arrived at the right destination.

For Kharge is a wise old man with a first-hand experience of being an insider and thus able to prepare the party to meet the challenge of the ascendant BJP. 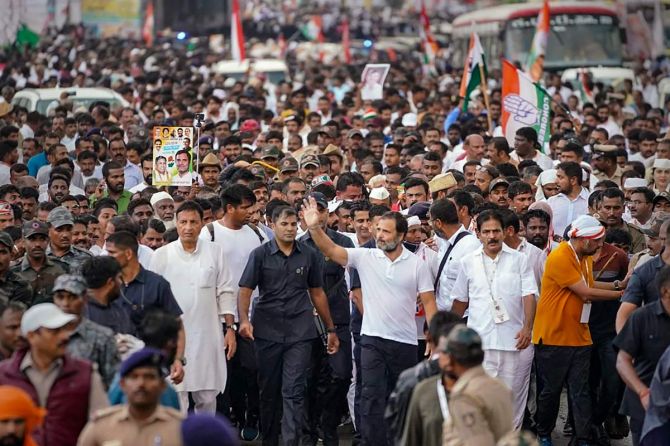 It is not unlikely that soon the Congress might seek to change the narrative from Rahul versus Modi to Kharge versus Modi.

For obvious reasons, the BJP would want to keep focusing on Rahul, but Kharge's elevation as Congress chief allows the main Opposition party to shift the focus from Rahul to Kharge.

The 80-year-old Kharge cannot be a threat to Rahul who at 52 still has plenty of time to get a handle on the nitty-gritty of politics.

At long last, the Gandhis have got something to smile about. 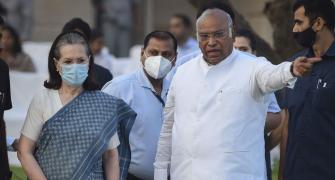 'Is Kharge What Young India Needs? 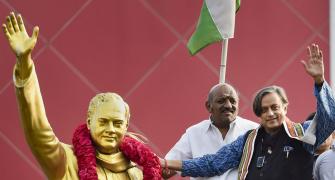 'We need Tharoor to shake the system' 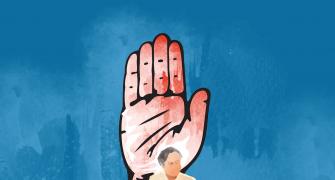 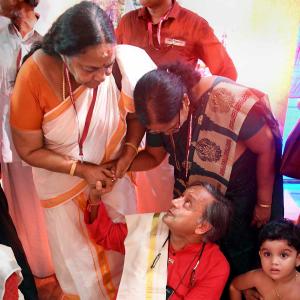