News
Business
Movies
Sports
Cricket
Get Ahead
Money Tips
Shopping
Sign in  |  Create a Rediffmail account
Rediff.com  » News » What Indian media can learn from US elections

Perhaps one aspect of the way modern media particularly print and news television works need some soul-searching: Their tendency to “frame” news stories as a conflict between two personalities, says Ajit Balakrishnan. I am in anguish, frightened… I feel homeless in America”.

I rubbed my eyes in disbelief. I was not listening to one of those homeless folks who accost you in street corners in New York begging you for a dime. These words are from Thomas Friedman, writing in the New York Times, soon after Donald Trump’s victory in the US presidential elections was announced.

Was this the same Thomas Friedman, the man you could safely say is the most successful columnist in the world, whose book celebrating globalisation, The World is Flat, has won every major prize in the world and has been on every bestseller list?

Why did a Donald Trump victory cause him so much distress? What happened to his prophecy that globalisation is a force that “involves the integration of free markets, [and] nation states to a degree never before witnessed…”? Why has that upbeat optimism suddenly turned into anguish? What was wrong if his fellow Americans had just elected a man whose slogan was that he would “Make America Great Again”?

One would have imagined that Americans of all people have little to complain considering the dominance of that country in the world today: America accounts for 40 per cent of the world’s defence spending, polices the world with 250,000 troops in 700 bases across the world, the US dollar is the international currency of choice, the US effectively controls the major international economic institutions, through its Silicon Valley companies America controls virtually all of Information Age technologies.

Why then a feeling that America has fallen behind and needs stern action and a new leadership to get back to the front?

According to Breitbart News, whose executive chairman, Stephen Bannon, is a key member of Mr Trump’s team, since the 1990s, 5.8 million jobs, which account for a third of the high-tech sector’s jobs in America, have been lost because of offshoring. In addition, the US balance of trade on advanced technology products has fallen from a $35-billion surplus in 1992 to a $92-billion deficit by the end of 2015.

After the election verdict, American media, both print and television are going through a great deal of introspection about how they got it so wrong -- practically all of them had spent the months in the run-up to the presidential election poking fun at Mr Trump and predicting a sure failure for him are now scratching their heads and wondering how they missed the grass roots support that Mr Trump so obviously (in hindsight) had.

Perhaps one aspect of the way modern media particularly print and news television works need some soul-searching: Their tendency to “frame” news stories as a conflict between two personalities.

As a recent scholarly study by The Project for Excellence in Journalism in the United States puts it, “Three narrative frames -- conflict, winners and losers, and revealing wrong doing -- account for 30 per cent of all stories, twice the number of straight news accounts... [and] this penchant for framing stories is even more pronounced at the top of the front page.”

“Explanatory” frames, those that reveal how things work, how they fit into larger trends or historical context accounted for a mere 12 per cent of all stories. With news journalism citizens are not adequately educated on the pros and cons and context of issues -- every news story is presented as a combat between two personalities.

The trend in Indian media is similar.

No really in-depth analysis or reports have been done in Indian news media about the topics that stare you in the face: Indian company executives, senior civil servants, newspaper editors, doctors, dentists and lawyers being forced to spend Rs 50 lakh or more a year to send their children to study in US, British and Australian universities taking on the large expense of a foreign degree for their children; the sense of angst among powerful communities such as the Jats, the Patels and the Marathas whose children yearn for entry into an urban professional life; the large-scale advertising and promotion of apartments priced at Rs 5 crore or more, an amount outside the reach of practically anyone in India; why India has to import practically all its mobile phones; what true role gold plays in our society and economy that we have to import about $50 billion of it every year (the argument that it is for middle class marriages is too facile to take seriously). What are the larger societal implications of all this?

In America, the true underlying issues which need to be addressed, are, according to The Washington Post, how to reconcile the contradictory pulls of a slow-growth economy and the spiralling demand for social security and medical care benefits from an ageing society, which is leaving very little funds for making school and college education affordable and renewing infrastructure such as highways and bridges.

Instead of focusing on candidates and their ideas for solving these real issues, much of media coverage revolved around Mr Trump’s tax filings and hair style and Mrs Clinton’s private email server.

In India, the true underlying issue is to how to provide relevant education at the school and post-secondary level and create matching jobs and affordable housing for millions of young people, and if our political leaders are not forced by the media to focus on these issues we could also face soon a societal implosion.

Ajit Balakrishnan (ajitb@rediffmail.com), founder and CEO of Rediff.com, is the author of The Wave Rider, a Chronicle of the Information Age. 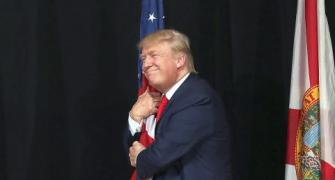