'How the two South Asian neighbours will interact with each other in the coming months will be decided by the two prime ministers in Washington,' says Rajeev Sharma. IMAGE: Prime Ministers Narendra Modi and Nawaz Sharif met in Paris on the sidelines of the UN Climate Summit, which led to the impromptu Lahore summit.

Things are not looking rosy.

And yet, things are not stalled.

This is what characterises, and indeed sums up, the India-Pakistan bilateral relationship in which Prime Minister Narendra Modi has injected huge personal and political capital ever since he undertook an unexpected trip on Christmas to Lahore and to Raiwind, his Pakistani counterpart Nawaz Sharif's ancestral home.

India-Pakistan relations were transformed with Modi's impromptu visit to Pakistan almost three months ago. The symbolism of an Indian prime minister travelling with a Pakistani prime minister in a Pakistan Air Force helicopter piloted by a PAF pilot was significant and will remain etched in memory forever in the India-Pakistan bilateral context.

With this one move, Modi invested hugely in his Pakistan policy and India-Pakistan bilateral relations.

And yet, there have been setbacks.

A couple of days ago, India denied visas to five Pakistani diplomats to attend the March 19 T20 World Cup game against India in Kolkata because of the diplomats's alleged affinities with the Directorate of Inter Services Intelligence, the ISI.

Earlier this month, Defence Minister Manohar Parrikar hauled Pakistan over the coals in Parliament with his damning remark that the January 2 Pathankot terror strikes could not have occurred without the knowledge of Pakistani State actors. Pakistan had howled over Parrikar's statement and branded it 'unhelpful' in building bilateral relations.

And yet, there have been many positive steps by Pakistan aimed at signalling positive vibes in Pakistan's outreach to India.

A more compelling confidence building measure from the Pakistani side followed when Pakistan National Security Advisor Lieutenant General Naseer Khan Janjua (retd) tipped off his Indian counterpart Ajit Doval about ten terrorists, apparently from a third country (read Afghanistan), who had sneaked into India to wreak mayhem on Shivratri. Three of these reported terrorists were neutralised by India a few days ago.

India-Pakistan relations are too complex to be resolved by such positive measures taken by Islamabad.

In view of this, External Affairs Minister Sushma Swaraj meeting her Pakistani counterpart Sartaj Aziz on the sidelines of the SAARC ministerial meeting in Pokhra, Nepal, on March 17 does not mean much.

Such an encounter can only be construed as a preparatory meeting for a summit between the two principals in Washington, DC on the sidelines of the Nuclear Security Summit this month end. How the two South Asian neighbours will interact with each other in the coming months will be decided by the two prime ministers in Washington.

The two countries' official brass and the foreign offices await their next to-do moves after the Modi-Sharif meeting in Washington.

Those who believe in traditional diplomacy would say that nothing much could be expected if the prime ministers of two warring States meet in a third country without the back-up and elaborate preparation of their foreign offices.

After all, didn't the Agra summit flop for the same reasons?

The Atal Bihari Vajpayee government had plunged headlong into bilateral diplomacy at the highest levels without letting their foreign offices prepare the ground for normalisation of relations.

Modi has already invested huge political capital in improving relations with Pakistan. This is currently being choreographed at the PMO level.

It is in the womb of time to see if the current PMO driven peace initiative will yield dividends. 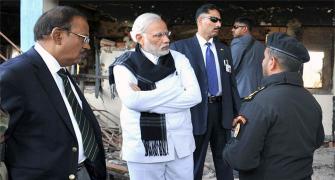 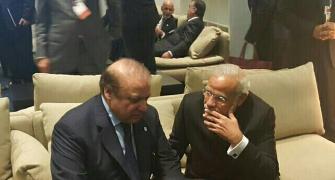 So what did Modi-Sharif talk about in Paris?