Three scenarios how India and China could clash again

While a full-fledged war between the two nuclear and rising powers in Asia is highly unlikely due to the costs of war, yet a scenario of a quick land grab by China to humiliate India again cannot be rule out in future, says Srikanth Kondapalli.

October 20 marks the 50th anniversary of China's decisive attack on the Indian forces in the trans-Himalayan region. China's key argument in going to war with India in 1962 is two-fold, viz. that the latter had provided refuge to the Dalai Lama and Tibetans in 1959 thereby intervened in the internal affairs of China; secondly that India had followed "forward policy" of setting up over a 100 outposts in the disputed territories between the two countries. Both these arguments are specious and dangerous as even after 50 years China could cite these again for any misadventure.

While a full-fledged war between the two nuclear and rising powers in Asia is highly unlikely due to the costs of war, yet a scenario of a quick land grab by China to humiliate India again cannot be rule out in future. Although escalation towards a nuclear confrontation cannot be predicted even if the two combatants confine to a conventional skirmish, three broad scenarios could be identified where India and China could clash in future.

Firstly, the trans-Himalayan region -- China's intransigence to meet the demands of the Tibetans for autonomy resulted in radicalisation and internationalisation of protests of the Tibetan community in the last four years since the Beijing Olympics. More than 120,000 Tibetans reside in China and time and again China's officials or media accuse India of intervening in its internal affairs by playing the Tibet card.

As official accounts in China refer to Tibet-Dalai Lama's flight in 1959 to India -- as the main reason for China going to war in 1962 -- there is no guarantee that China would not resort to the same argument again in future.

Secondly, the number of transgressions across the line of actual control is increasing. These accounted, according to reports, for about 213 in 2010, 234 in 2011 and over hundred in the first half of 2012 -- increasing substantially since the nuclear tests of India in 1998.

The official discourse on either side is that there exist peace and tranquility on the border areas and that no firing incident ever took place after China grabbed Jelep La in 1967 in Sikkim. However, it is not clear how and why the respective paramilitary forces of the two countries almost came to blows in December 2000 at Daulat Beg Oldi in Ladakh or the Indian border patrols were maltreated by the Chinese side in June 2003 in the Arunachal Pradesh border even as the then Prime Minister A B Vajpayee was on an official visit to China.

It is true that the confidence building mechanisms of 1993, 1996 and the joint mechanism on border stability meeting in January 2012 have resulted in talks at local level commanders regarding transgressions. Yet the larger question that breeds mutual suspicions is the status of the bilateral relations and the unresolved nature of the territorial dispute even after three decades of talks between the officials of both countries.

Thirdly, China's officials, media and scholars cite the India-United States defence cooperation agreement of June 2005 and the subsequent dynamics as a potential destabilisation factor in India-China relations. While forgetting for the moment the collaboration of the US and China during the Cold War against India (specifically during Bangladesh Liberation War and support to Mujahedeen in Afghanistan) or the other subsequent events such as passing the 1172 Resolution against Indian nuclear capabilities and the recent Group-2 (US-China cooperation), China's recent discourse is that the US defence assistance to India could lead to confrontation with China in future.

On the 1962 border clashes as such there are more questions unanswered by the Chinese and Indian sides. For instance, one of the Chinese reasons for 'teaching' India a lesson in 1962 is that the then Prime Minister Jawaharlal Nehru ordered the Indian Army on October 12, 1962 to occupy Dho La [which is north of McMahon Line] and hence such troops should be overthrown, in addition to vacating Indian outposts in the region.

This argument is specious as the territorial dispute had been unresolved between the two. China's Premier Zhou Enlai once commented that his country is busy in domestic issues and that he does not have time to look into the matter. Also, neither India nor China has declassified documents in this regard and it is hard to pinpoint the extent of national jurisdictions.

Again, there is also speculation regarding a deal between Nehru and Zhou Enlai in 1954 on Tibet -- of Indian recognition of Tibet as part of China in lieu of Indian claims on the territory it inherited from the British.

Another lacuna on 1962 is that even today, while the Indian scholarship had dissected the events leading to border clashes at greater details, China's scholars rely on the Indian and western sources in explaining China's actions in 1962. There seems to be a surprising unanimity in China's scholarship across the board on this issue, even as some have criticised Mao Zedong and others for being 70 percent correct and 30 percent wrong on the political movements. This is unprecedented consensus for China.

Again, most Chinese and western analysts do not account for China's military advances in Tibet and strategic domination in the border areas from 1950s as posing concerns for India. Indeed the 1950-51 invasion of the Chinese military in Tibet for the first time brought armed forces face to face between the two countries. In other words, most such analysts brush aside the argument that India's forward policy was a response to China's forward policy of militarising Tibet.

There then lay the differences in interpreting 1962 and the lingering uncertainties in the trans-Himalayan regions for decades to come.

Srikanth Kondapalli
Related News: China, India, Tibet, Zhou Enlai, Srikanth Kondapalli
Print this article
Exclusive: What provoked the India-China war?
50 years later, what has the GoI got to hide?
1962 war would been different with IAF's involvement'

'I was, I am, and will remain anti-Chinese' 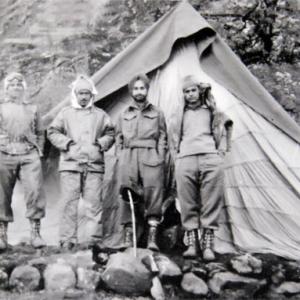 'We were told the Chinese will come in waves'