The unquestioning Indian reverence for Sanskriti

'What does our conservatism seek to conserve?'
'Of course its values, which are akin to religion and accepted unquestioningly.'
'Such things as respect for elders, studying 'hard', career choices being determined or influenced by parents, the idea of arranged marriage, the marking of ritual and ceremony,' explains Aakar Patel.
Illustration: Dominic Xavier/Rediff.com

A survey a couple of years ago showed that 95 per cent of Indians were poor or low income by global standards.

Only 3 per cent were middle class.

If you employ a maid or a driver, they are probably in the low-income band. Of course if you live in a city, being low-income is not very different from being poor, because higher expenses on transport and rent will mean less disposable income and little or no savings.

Our economic growth of the last 25 years has helped hundreds of millions pull themselves out of the 'poor' bracket and into low income.

The difficult part is now ahead of us as a nation.

The economic challenge of the 20th and 21st centuries for countries has always been getting the bulk of the population into middle income status and this is not unrelated to culture.

I am fascinated by how the entry in India of all these families into a class above where they were earlier has affected the world around us.

Forty years ago, conversationally, we had no fixed definition of middle class, but we knew what it was.

Middle class meant 'not poor'. The working class, meaning those who worked with their hands, were poor.

Those in white collar work -- government servants of officer grade, the fortunate few in corporate service, the media and so on -- were by default middle class.

To these one added the professions -- lawyers, doctors, architects -- and one arrived at what was meant by middle class.

There was no real concept of upper class.

It was assumed that the idea of the middle class was an elastic one but there was no particular class difference, or at least none that was apparent, between the wealthy and those below them.

There is a significant social gap between the maid and driver and their employer even though the difference in their incomes might only be, say, 1:10.

There are very clear boundaries and discriminatory rules that separate these two classes. This social gap is not manifest as one goes higher up the income chain.

Today the physical markers that separate the low income from the middle class are becoming fewer.

The maid and the driver will have a mobile phone and a television set (our maid also has a microwave and our driver a fridge). The possession of these items would have been unthinkable for those of their class 20 or perhaps even 10 years ago.

One of the things that made you middle class when I was a child was attending an English school.

In the India of 2018 there is hardly a child in any of our cities that is not studying English. The vernacular schools are shutting down at a rate so quick that they will be extinct in our lifetime for lack of demand.

Another thing that has become relatively easier, if not relatively cheaper, is holiday travel, earlier the preserve of the middle class alone.

The large number of tour bus operators has made it possible for the low-income families to travel together, on pilgrimages mostly but also increasingly on holidays. I have only anecdotal and observational evidence to support this but it is good enough to arrive at a conclusion.

The buses, some of them of the 'sleeper' type, do away with the need to find hotels for the night. Only toilets are needed and these the eateries will provide.

One thing that is common and has always been common to us across classes is Indian conservatism.

By conservatism I do not mean 'right wing' (a phrase that I cannot make sense of in India). I mean it in the original sense of the word, a seeking to conserve.

What does our conservatism seek to conserve? Of course its values, which are akin to religion and accepted unquestioningly.

Such things as respect for elders, studying 'hard', career choices being determined or influenced by parents, the idea of arranged marriage, the marking of ritual and ceremony.

Above all, the unquestioning reverence for culture (sanskriti -- the word itself holding rich meaning once we examine it).

One area that needs more study is how the entry of the hundreds of millions into low-income status has affected entertainment content.

My guess here, and it is only a guess because I do not watch television and I cannot remember the last movie I saw, is that the content has been oriented away from the sensibilities of the old middle class.

You see, 40 years ago, the middle class was not only economically distinct from those below, but also culturally.

It aspired to high culture and many of us will have been taught classical music or dance, for example, and, of course, most of us were bilingual.

This distinction made it possible for entertainment to be separated. I don't want to go into this aspect too much here today, but this explains why there were movies aimed at the 'balcony' and those at the 'stall' (I wonder if younger readers even know what those words mean).

The entry of the hundreds of millions into consumption has manifested itself in cinema, which is ticketed, differently from the way it manifested on television. Cinema content today is not written for the poor or those of low income.

However, television, which is available on low subscription and relies on advertising and therefore has a mass reach, has come to be written mainly for the sensibilities of the low-income, who are the many.

This explains the grumbling from people-like-us, the old middle class, that there is nothing to watch.

Lastly, and perhaps most importantly, the shift we are discussing here has also affected us politically.

The charismatic saviour of the middle class of 30 years ago was an extremely Anglicised man from a 'good family' (that awful Indian term), and aloof from the masses.

The charismatic saviour of the middle class today is vernacular, from an ordinary family and more accessible culturally. 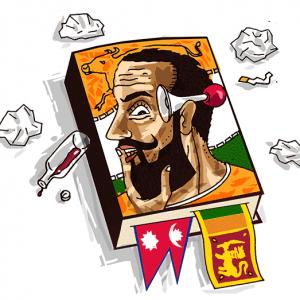