'Bureaucrats have transformed a project meant to empower the poorest Indians into one that empowers only babus and disempowers everyone else,' says Mihir S Sharma.
Illustration: Dominic Xavier/Rediff.com 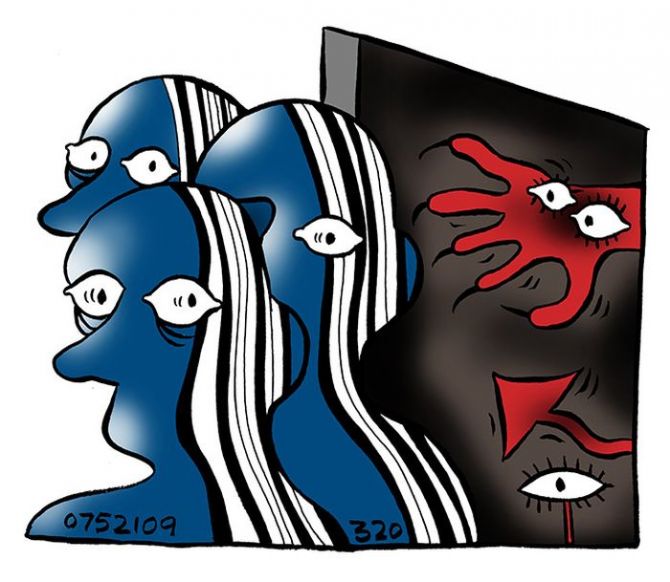 Let us get one thing out of the way: Aadhaar, or the Unique ID, as originally conceptualised, would have vastly increased the ability of the average Indian to demand the government services they were due.

It would have helped cut out middlemen, and -- implemented properly -- aided in the migration from villages to towns inevitable in a developing society.

That is the reason why many of us supported the UID project.

And let's get another point sorted. The Supreme Court may or may not vindicate the government's position on the constitutionality of Aadhaar; it ruled in August 2017 that Indians had a right to privacy, but nobody can say what the Constitution Bench of the court will decide on the case that is currently underway.

Irrespective of these points, one thing has become clear during these Supreme Court hearings: The government has over-reached massively, and deceived the people of India.

It has proved to be exceptionally untrustworthy about a project that should have been implemented with care and restraint and not in the manner it has been -- arbitrary, babu-driven incoherence.

This came through most clearly last fortnight when how the government misled Indians was clearly exposed by the judges of the Constitution Bench.

The UIDAI lawyer, Rakesh Dwivedi, mentioned the linking of phone SIM cards to subscribers' Aadhaar numbers as directed by the Supreme Court.

Immediately, he was corrected by the judges: 'In the Lokniti Foundation case, the Court has not directed the linking of SIM with UID. But the Union government's circular says so... There was no such direction from the Supreme Court, but you took it and used it as a tool to make Aadhaar mandatory for mobile users.'

In other words, the judges are rightly incensed that the government used the Supreme Court's name to deceive more than 700 million into linking their SIM cards with their Aadhaar.

Do you have a mobile phone? If so, you were probably inundated with SMSes from your mobile operator insisting that you link your SIM to Aadhaar, as mandated by the Supreme Court.

If you push your phone company as to why they are saying this -- and I have -- they are likely to refer you to a government notification claiming this fact.

They needn't have done that: They could just direct you to the relevant minister's Twitter feed, since that is the most reliable indicator of government policy in the Modi Sarkar. And Law and IT Minister Ravi Shankar Prasad has been unequivocal on the subject on Twitter.

I want to quote him exactly, so nobody can say that he is being taken out of context. In September 2017, he was warned by Twitter user @pasreech, doing his patriotic duty: 'Sir, check this out: @Vodafone IN is forcing us to link Aadhaar. Tell them it's not mandatory.'

In response, the hon’ble minister said, at 11:04 pm on September 10, 2017: 'Yes! You need to link your mobile number with Aadhaar as directed by the Supreme Court.'

There must be a word for that sort of blatantly incorrect statement, but at the moment the appropriate word escapes me.

Of course, this is not the only massive Aadhaar-related evasion or over-reach by the government.

Consider the fact that it has, for the longest time, insisted that authentication failures from Aadhaar are 'negligible' when, in fact, the UIDAI CEO had to tell the Supreme Court recently that biometric authentication through Aadhaar fails 12 per cent of the time.

And the list of attempts to over reach the government's authority on Aadhaar linking is long.

They tried to make Aadhaar mandatory from everything to buying cricket tickets to getting into airports to getting a death certificate.

This is in spite of the fact that the Supreme Court has explicitly said there is a limited number of programmes that can be linked to Aadhaar, listed them out, and said the government must come back to it if it wants to expand the list.

This directive has been ignored by the government.

Why? What lies behind this?

The answer is that the government has perverted the purpose of Aadhaar. It has subverted it to its ends.

Bureaucrats have transformed a project meant to empower the poorest Indians into one that empowers only babus and disempowers everyone else.

Voluntary Aadhaar means that those with no other ID could get hold of one, and use it when they really needed to.

Mandatory Aadhaar reverses the power relationship, putting the bureaucrat in the driver's seat.

Politicians have allowed this to happen, because the current government wants to sell the 'savings' from Aadhaar -- much of which are imaginary -- as a sign of its unparalleled efficiency on WhatsApp.

The point of UID was not to restrict access and save money; it was to broaden access, and save people.

Politicians and bureaucrats subverted Aadhaar, applying it liberally and making it mandatory, in spite of the explicit orders of the Supreme Court.

Most would agree that if justice were the only criterion (and not law, efficiency, precedent, or any of the other things the judges will consider), the entire government would be in the dock for contempt of court.

And also for contempt of India. 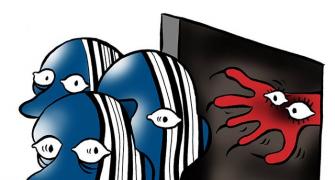