'It was India's good fortune to have a Vajpayee lead the government at this crucial moment in history.'
'By taking the N-decision he saved future generations of Indians from being 'Kosovoed' or 'Iraqed',' says Colonel Anil A Athale (retd). 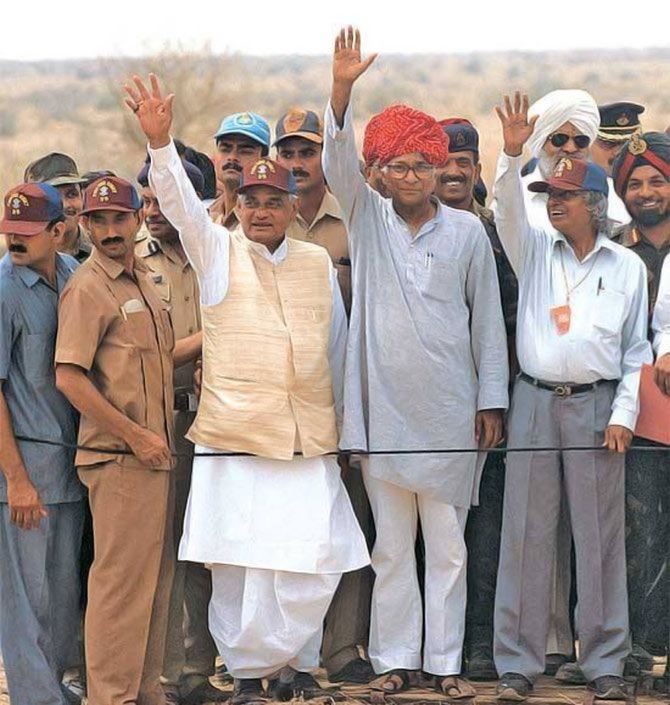 IMAGE: From right, A P J Abdul Kalam, then scientific advisor to the prime minister, then defence minister George Fernandes, then prime minister Atal Bihari Vajpayee and others at the Pokhran nuclear test site in May 1998. Photograph: Press Information Bureau/Facebook

Atal Bihari Vajpayee was the first non-Congress prime minister to complete a full term. His shock defeat in the 2004 elections and the ten years of United Progressive Alliance rule that followed tend to obscure his legacy.

He was the first prime minister who made a determined push for the development of roads -- the network of national highways being his great legacy.

But more than in any other area, he broke the mould in defence and foreign policy.

Here is an attempt to trace the history of his legacy on issues of war and peace.

Under the able leadership of Dr Homi J Bhabha, India over time built up an impressive and complete capability in the nuclear field.

Nehru, as a pacifist, was against nuclear weapons. Yet he kept the Indian nuclear programme 'independent' of foreign curbs with the aim that should India need nuclear weapons at a future date, it must have the infrastructure ready.

Indira Gandhi, reacting to the pressure created with the Non Proliferation Treaty of 1968, carried out the first nuclear test in May 1974, signalling Indian resolve.

In the then prevailing Cold War, India did not feel it necessary to go any further as the Soviet Union's support kept the Chinese threat under check.

The demise of the Soviet Union in the early 1990s, rapid economic strides taken by China and the first Gulf War of 1991 totally changed the security environment for India.

The Gulf War demonstrated American power, and this was reinforced with its actions in Kosovo, a province of former Yugoslavia.

Many feared that after Baghdad, Mumbai would be the next target and urged successive governments to take the decision to go overtly nuclear.

But the fear of an economic embargo and lack of political will made India back out at the last moment.

If India carried out a nuclear test, as France and China had done, it would be violating no treaty obligations. But we did not test.

A clause on 'entry into force', inserted at the instance of China, meant that even if India did not sign the Comprehensive Test Ban Treaty, its room for manoeuvre was being restricted.

A time would come when it would be difficult for India to defy world opinion and carry out a test.

It was imperative for India to make up its mind and carry out the minimum number of tests.

On May 11, 1998, three underground nuclear detonations took place at Pokhran. This was followed on May 13 by another two detonations.

These tests confirmed that India could manufacture thermonuclear warheads and carry out sub-critical, computer-controlled nuclear testing.

Vajpayee declared that India's nuclear weapons were purely for defensive purposes and gave a unilateral 'no first use' pledge. 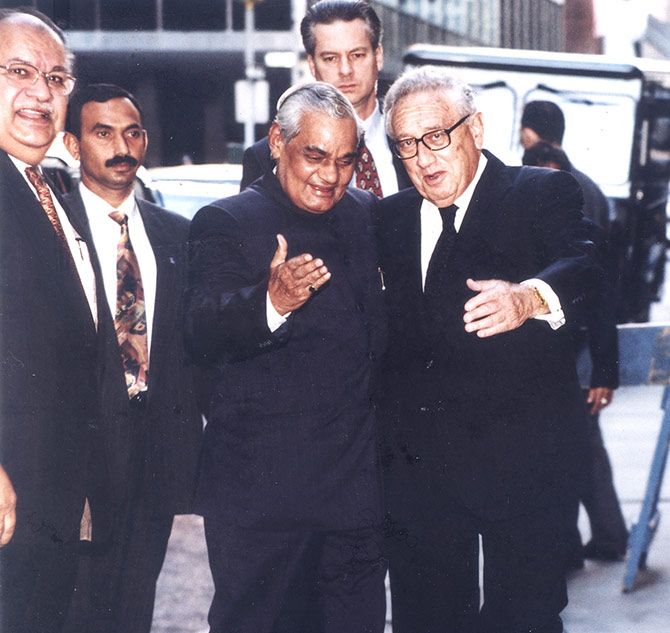 IMAGE: On his first visit to the United States after the May 1998 nuclear tests, then prime minister Atal Bihari Vajpayee with former US secretary of state Dr Henry Kissinger in New York, September 1998. On the left is India's then ambassador to the US Naresh Chandra.

By asserting her power India raised a furore in the world.

Indians rejoiced at the success of our scientists and applauded the prime minister for his boldness.

America slapped economic sanctions on India. Technological sanctions had been imposed in 1974 and these were further tightened.

In retrospect, it seems clear that the Pokhran tests came not a day too soon. The signs of coming difficulties were there for all to see.

In 1991, the West changed its non-proliferation policy to a more aggressive 'counter-proliferation'. The Washington Post reported in 1993 that a sum of $6 million was earmarked specifically for South Asia to 'educate' Indians on this issue.

Recipients of the West's largesse mounted a campaign in the Indian media under the garb of peace movements to disarm and castrate India.

The ruling political elite had a profusion of skeletons in its cupboard, all known to foreign intelligence agencies, that India's preparedness in the vital security area was deliberately degraded.

It was India's good fortune to have a Vajpayee lead the government at this crucial moment in history.

By taking the N-decision he saved future generations of Indians from being 'Kosovoed' or 'Iraqed'.

The nuclear tests were criticised on a number of grounds. The anti-nuclearisation argument rested on economic premises which later proved to be false.

A leading economic daily gave a screaming headline of loss of aid and impending disaster. The reality, as it turned out, was that despite the loss of $1 billion in aid, India collected nearly $4 billion through Resurgent India Bonds.

The mention of China as the main threat also came under criticism.

Like a good general, Vajpayee anticipated the Pakistani tests and subsequent American pressure to tie the Indian nuclear programme with our small neighbour.

But by linking the Indian nuclear tests to the Chinese threat, India neutralised any such pressure in future and the constant attempt by the West to equate India with Pakistan.

As expected, Pakistan followed with its own tests on May 28 and 30, 1998. But it needs to be stressed that while India tested a hydrogen bomb on May 11 and sophisticated 'small' weapons on May 13, Pakistan made no such claims.

In fact it is possible that in the field of small weapons, usable in the Himalayas against the Chinese, India has stolen a march over China.

The truth is, Indian nuclearisation was aimed at neither China nor Pakistan but was a challenge to the new world order which had no place for India, home to one-fifth of mankind. Pokhran II or the 'Shakti' tests changed the world's perception of India forever.

Colonel Anil A Athale is currently co-ordinator of the Pune-based Initiative for Peace And Disarmament affiliated with the Bharatiya Vidya Bhavan. 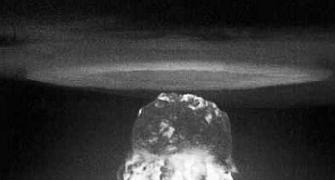 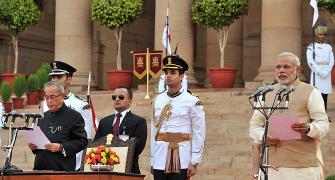