The message from migrant labourers killings in Kashmir

'The terrorists will allow only those who practice their tenets to live in Kashmir,' argues Brigadier S K Chatterji (retd).
Illustration: Dominic Xavier/Rediff.com Five migrant labourers working over 2,000 km away from home in the Kulgaum district of the Kashmir valley will not ever return to their villages.

They were eliminated by terrorists.

No longer have they any responsibility of sending money back home to a remote village in West Bengal where their wives bring up undernourished children.

Apparently, their deliverers were the brave fighters of Jaish e Muhhammad, a terrorist group based in Pakistan.

One does not need to make rounds of bus stands in Srinagar to report on the migrant workers who had surely queued up to take the next bus out of Kashmir.

With or without mobile connectivity in the valley the news would have spread like a prairie fire.

The State was unable to assure them one of their fundamental rights: The Right to Life.

As far as the terrorists are concerned, they selected the weakest segment that could possibly have been targeted.

Defenceless, helpless people, who had no capability whatsoever of giving a fight or responding in any other way but get on their knees to plead/offer their last prayers.

All five were followers of the same faith as is the one most practiced in the valley.

There were other reasons for attacking this lot.

Since they are migrants to the valley, the response of the locals would definitely not be at the level to be expected had it been six Kashmiri men.

In fact, none of the half dozen killings of truck drivers and apple traders that preceded the killing of the labourers belonged to the valley.

The message by the insurgent group is clear.

Today, every Indian has the right to live and own property in J&K like they do in the rest of the country.

The message from the terror groups is that none but Kashmiris are welcome to Kashmir.

All others, irrespective of caste, clan, and religious affinity better stay out.

The terrorists will allow only those who have faith and belief and practice their tenets to live in the Kashmir valley.

By killing the migrant labourers the availability of labour in the valley stands choked.

The killings will affect the carting out of the valley's biggest trading commodity -- apples.

The militant strategy is to retain their hold on Kashmiris by fear and disallow further steps to bring in normalcy.

Only then can the Delhi dispensation be projected as an establishment that bit more than it can chew.

The imposition of President's rule has led to a drop in the violence levels in the valley.

The attacks by the terrorist groups have also been fewer.

The attacks on drivers, traders and now labourers will help the terrorist groups to get their cadres back in the field.

Those groups that have not been involved in these attacks will be under pressure to do something of their own.

There has been a noticeable increase in the number of grenade attacks in the last couple of weeks.

A grenade attack against the security forces easily leads to collateral casualties among civilians.

Grenades have not been the weapons of choice for most terrorist groups precisely because of such a fallout.

However, now that the terrorists are boxed in, they are using grenades as a last resort.

The success of the government will largely depend on its ability to communicate with the people.

Terrorist activities like killing defenceless innocents, indiscriminately throwing grenades and attempts to close educational institutions and business opportunities, provides the government a fair opportunity of launching a media campaign to substantially dilute whatever leanings certain sections may have towards the terrorists.

The communication strategy needs to be based on focussed publicity of the damage terror groups are doing to the valley's growth and culture -- and its future.

Their lack of concern for the lives of locals, disrespect for all tenets of faith, and pushing J&K back by a couple of decades quite similar to conditions in Pakistani occupied Kashmir.

The other major issue that is suitable as a perception management theme in the valley is the effect on trade and commerce.

The umbilical linkage of the valley's economy with the Indian hinterland and the lack of alternatives are only too obvious.

With truck drivers not ready to travel to Kashmir and no other form of transportation available or economical, much of the apple crop is destined to rot.

More than any other issue that needs to be propagated through the media are the attempts by the terrorists to stop school exams that threatens the future of every school going child in the valley.

In spite of the terrorist diktats, the exams have been conducted with parents guarding the schools.

A few rounds fired by the terrorists to scare the children away haven't been too effective.

In conjunction with a media offensive, there is need to ensure that shrines and educational institutions in the valley do not contribute to further radicalisation.

Certain checks and balances need to be imposed and bold action undertaken if these are flouted.

The bifurcation of J&K has been welcomed in most parts of the erstwhile state.

A couple of districts continue to be affected by terrorism.

A large segment of people in these districts remain passive because they fear reprisal by the terrorists should they display any affinity with the government.

The State is not in position to guarantee their safety.

Once we are able to provide better stability in J&K, the space for the terrorists will erode substantially.

The mistakes that the terrorist groups are making provide an opportunity to the government to build stronger bridges with the people.

If utilised in a planned and phased manner, simultaneous with better governance, the people of the valley will surely prefer to be with India rather than surrender the destiny of their children to terrorist intolerance. 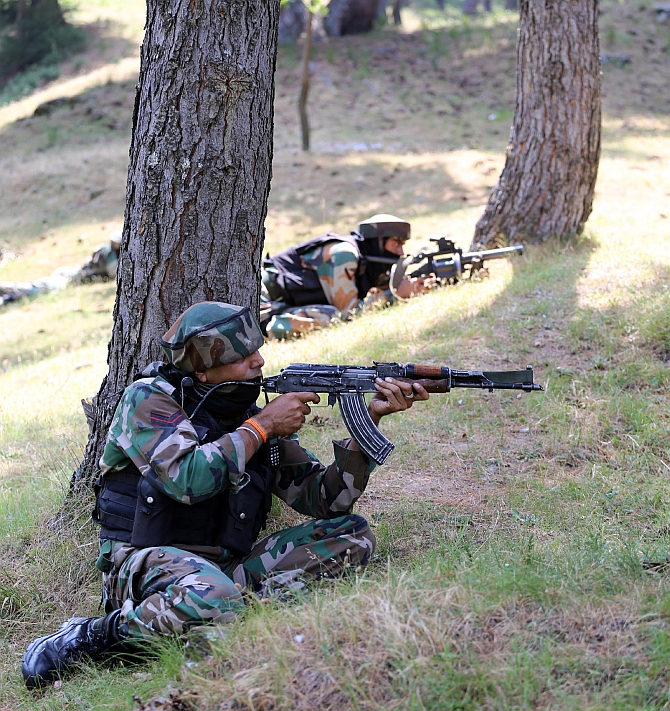