The dangerous drift in governance

Team Congress says it opposes Team Anna's Lokpal recommendations because it could create a parallel system of government. If so, we should support Team Anna without reservation because right now we seem to have no government at all, says T V R Shenoy.

You may have heard of the phrase 'running around like headless chickens', which indicates directionless panic. But never had anyone heard of a chicken choosing to cut off its own head -- until the United Progressive Alliance-II regime anyhow.

Let us start with grease. No, not the greasy palms outstretched in every hall of governance that are the focus of Team Anna, but 'grease' as in oil. More specifically, as in the Oil & Natural Gas Commission. This energy giant, which has made it to the Fortune 500 list, is responsible for over 75 percent of India's crude oil production and over 80 percent of the country's natural gas production. We are approaching the end of the first quarter of this fiscal year, and as I write only Reliance Industries has a larger market cap of the 30 stocks that make up the Sensex.

Who precisely is at the helm of the ONGC?

The correct answer is 'Nobody knows'. The former chairman, R S Sharma, retired on January 31, 2011. There is still no clarity as to the identity of the new chairman.

The Public Enterprises Selection Board announced as far back as October 19, 2010 that Sudhir Vasudeva, then ONGC's Director (Offshore) would take over as boss. Shortly after this the Central Vigilance Commission received two anonymous letters, both supposedly written by MPs and both making allegations against the chosen candidate. The CVC then put the appointment on hold.

The interesting thing about these letters is that both are forged documents. Supposedly written by CPI-M members, two letters reached the CVC reciting serious allegations against Vasudeva.

Both letters are forgeries. The two men who allegedly wrote them -- Tapan Sen (a CPI-M MP) and A Mannan Hossain (also from the CPI-M but a former MP) -- have repeatedly and publicly denied writing them. And by all reports they are crude forgeries. So why did the government of India not go ahead and appoint Vasudeva as planned?

Failing that, why did it not opt for the Public Enterprises Selection Board's second option, R K Tyagi of Pawan Hans? Why is ONGC still being led by an interim chief, at a time when the prices of petroleum products are on every Indian's mind?

I have already mentioned the CVC, whose duties include vetting potential candidates for top jobs. But who is the current CVC?

The Supreme Court ruled on March 3, 2011 that P J Thomas's appointment as the CVC was unwarranted.

The Manmohan Singh ministry had most of March as well as all of April, May, and June to find suitable candidates, discuss them with the Leader of the Opposition (Lok Sabha), and send the name to the President. There has been absolutely no movement on that front.

This failure has led to a logjam at the highest circles of governance.

If ONGC is a heavyweight when it comes to the Sensex, the Life Insurance Corporation bids fair to be named the country's single largest investor. LIC boasts of touching the lives of over 250 million Indians, just under a quarter of the population. Even calculated in US dollars rather than Indian rupees, LIC's assets run into hundreds of millions. So, who exactly is the current chairman of LIC?

This is the season of scams so you can be excused if some of them recede from your memory. In November 2010 news broke of a cash-for-loans scam that involved LIC officers among others. The Manmohan Singh government subsequently demoted T S Vijayan from chairman of LIC to one of its managing directors.

This is undiluted silliness. In effect the government of India was telling Vijayan that he was unfit to be chairman but simultaneously assuring the public that the same man is fit to be a managing director. Does this make any sense at all? More to the point, is this fair to all those millions that have entrusted their money with LIC, or even to all its employees?

The pattern continues to unfurl when you look at the country's largest employer, Indian Railways. Vivek Sahai, the chairman of the Railway Board, is set to retire on June 30. This will actually open up not one vacancy but two; the overworked Sahai has been doubling up as Member (Traffic) because the Manmohan Singh ministry had no time to find a suitable candidate.

It gets worse. June 30 is also the scheduled retirement date for the Member (Electrical) Sudesh Kumar and the Member (Staff) V N Tripathi. The Railway Board is supposed to have seven full-time members; as of July 1 it shall have only three.

Want more? Take a look at the structural chart for Indian Railways (helpfully provided on its site). Sanjiv Handa, the Member (Mechanical) on the Railway Board, is doubling up as head of the Integral Coach Factory. We learn that both Central Zone and Western Zone have the same harassed man, Kulbhushan, as their head. Both South Central and West Central list G N Asthana as their chief. K K Saxena tends to both the Diesel Locomotive Works in Varanasi and to the Rail Coach Factory in Kapurthala. Kuldeep Chaturvedi has both South Western and the Rail Wheel Factory in his charge.

Very bluntly, this is a mess.

For the past month and a half the railway ministry has been handled by the prime minister himself. Has he even begun the task of filling up vacancies?

The sense of drift is palpable wherever you look. Some might argue that the enforced vacancy caused by Thomas's removal came as a shock for the Congress-led government. But surely it should have prepared some contingency plans? And even that feeble excuse holds no water when it comes to planning for retirements -- where the precise dates can be calculated years in advance.

Team Congress says it opposes Team Anna's Lokpal recommendations because it could create a parallel system of government. If so, we should support Team Anna without reservation because right now we seem to have no government at all. 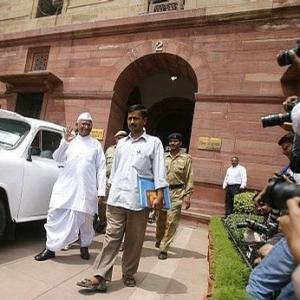