News
Business
Movies
Sports
Cricket
Get Ahead
Money Tips
Shopping
Sign in  |  Create a Rediffmail account
Rediff.com  » News » The Celebrity as a Padrone 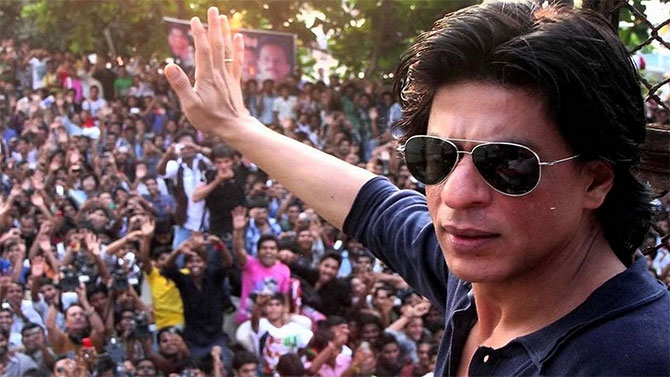 Ever wondered why a celebrity can charm you?
Sreehari Nair has the answer. 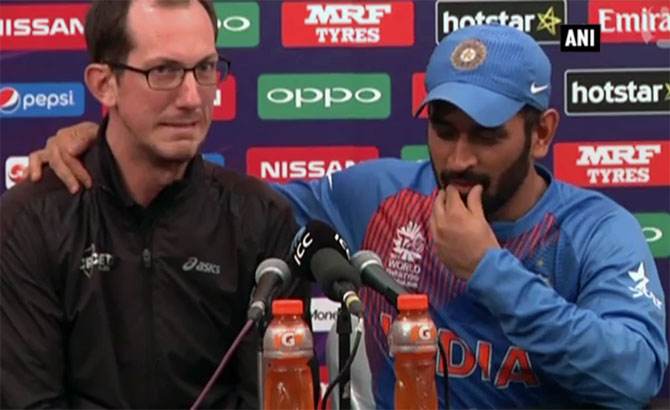 On March 31, 2016, Australian journalist Samuel Ferris ran into his dad, his pastor and a local cop, all in a span of 40 seconds.

In response to a seemingly harmless question he had asked at a press conference, Ferris was beckoned over his seat and politely offered another seat on the dais. Before he knew what was happening, a friendly arm was wrapped around his shoulder and his question thrown back at him in an instant reverse thrust.

Ferris wanted to know if the most powerful man in Indian Cricket, Mahendra Singh Dhoni, was due for retirement. At that very second, across galaxies, countless people were probably asking the same question; albeit in varying tones of politeness. But only Ferris held the unique privilege of shooting the question right at the man himself.

And then, Samuel Ferris' universe froze.

Even as Dhoni -- his arm wrapped around Ferris' shoulder all the time -- in the most courteous tone, put forth a series of postulates-disguised-as-questions backing his personal claim as India's No 1 wicketkeeper-batsman, it was Ferris who extended the postulates into statements of absolute endorsements.

'Do you want me to retire?'

Now Samuel Ferris may very well be a brilliant cricket analyst who, from his laptop, can conjure the strongest and most valid arguments for why Dhoni's international cricketing clock must be stopped. But that brilliant mind did not reveal itself on the dais that day.

Ferris, if I am not mistaken, went back and played down the whole incident, colouring it as his benevolence winning over Dhoni's pigheadedness. However, in his heart of hearts, he knows he lost his bearings that day.

Yes, Dhoni did instil fear and respect in Samuel Ferris for those 40 seconds, but he didn't resort to the familiar defensive tactics of celebrities at the edge of a mental train-wreck. He didn't, for instance, stare at Ferris Rasputinishly, scowl or act restive.

On the contrary, he achieved his end by making Ferris a part of his inner circle for those 40 seconds on that dais. In that inner circle he temporarily occupied, Ferris' cynicism or criticism found no quarter. The only thing that prevailed was worship and adulation for Dhoni.

Of all celebrities who are natural Padrones -- ones whose generosity comes blended with a sort of natural menace -- Dhoni perhaps represents the archetypical modern-day version. And, in the spirit of his times, he masks his Padrone temperament with certain playfulness and a cavalier attitude. 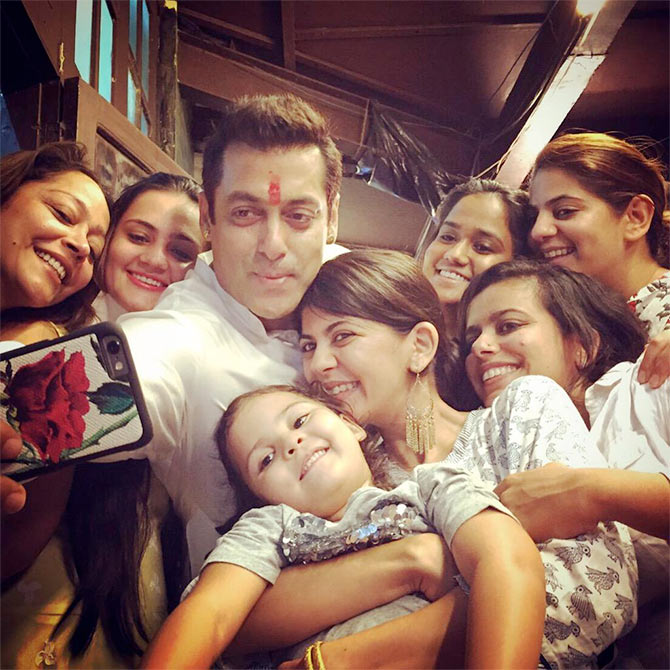 IMAGE: A Padrone Celebrity is almost always male, has his own definitions of right and wrong and seems on a perennial tap-dance set to a personal rhythm. Photograph: Arpita Khan Sharma/Twitter

Sachin Tendulkar, who was very consciously non-Padrone during his playing days, is staunchly Padrone now.

And if there is one aspect that separates General Zia-ul Haq from General Pervez Musharraf, it's that the former was a Padrone and the latter never was.

The Padrone Celebrity is essentially a post-1950s phenomenon; mottled around the time that twisted reverence got attached to stardom and glamour and crime came to tango.

A Padrone Celebrity is almost always a male, he has his own definitions of right and wrong, he seems to be on a perennial tap-dance set to a personal rhythm, is backed by a set of loyal followers who would probably do anything for him -- much like Gaddafi's female bodyguards -- and there is a sense of Mafioso shadiness about the breed that goes together with the sophistication.

Very much the natural Italian Mafia Boss with a golden voice, Sinatra was mocked for his singing style by the garrulous Don Rickles, kissed on national TV by another man, and his blue eyes used as a part of an extended mythical joke by friends. Sinatra of course didn’t mind any of that, except when he did actually mind. And when he did mind, they knew he did.

So when Sinatra would respond by raising just an eyebrow, the jokes would stop. The rimshots would end. And the hand would be sought again, for a reverent kiss. 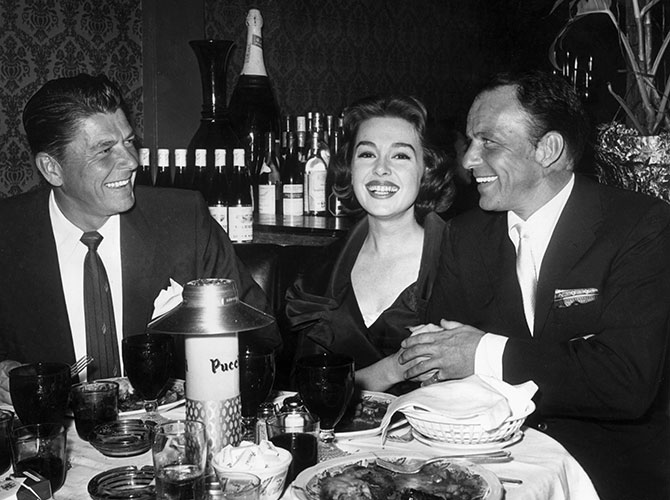 While there is -- as I alluded to before -- a special set of Celebrities that fall in the aforementioned type, most celebrated figures in the modern-day context are either part-Padrones or ones on the verge of getting their Padrone sensei.

And this fact adds genuine complexity to the nature of the Celebrity and the Celebrity-Commentator relationship in present times; especially if you consider how social media these days can turn just about anyone into a Critic-on-Demand.

It is quite established by now that in the connected digital world, there is a fair chance that a Celebrity you are being critical of online -- and with good reason sometimes -- may end up reading your rant, even as you are granted the privilege of not having to deal with the celebrity's reactions upfront. And truth be told, it's this false intimacy and actual distance working together that inspires honest dissections.

What you don't realise often, though, is that all your Kabuki self-exhortations directed at a Celebrity through a finely-worded Facebook post or a tweet of 140 characters is divorced from the actual experience of being around that concerned celebrity.

And what makes this critical honeymoon more messed-up is the truth that a Celebrity in flesh-and-blood is an entirely different animal -- meaning someone who has a charm that can make the revolving door do an extra turn every time he passes through one.

Most importantly, we forget that a Live Celebrity has the power to play up your deepest complexes and is capable of inducing stammer, engineering drool and keeping sane and neutral arguments totally out of your system.

Also, be apprised that a celebrity figure, who from your television set, looks the size of your child's preferred toy soldier may very well be six foot tall or above in reality. At any rate, their actual configuration -- the chest, the forehead, the palms, the eyelids -- are all scaled up to make you jittery.

Imagine a celebrity like that, inviting you with a smile, waving you over for a casual chit-chat about his supposed incompetence, as the world looks on.

Tell me, how many of us, at that moment in time, stand a chance of not giving up our self-respect and not turning into Yes-Men?

I know I may detest everything that Quentin Tarantino has done since Jackie Brown, but if I was ever put on a stage where I had to argue 'my detest' out with him, I would cave in. The oversized monster that Tarantino is, coupled with his ghoulish eyes and theatrical disposition would be enough to make me go, 'Point noted Sire!'

And while I am on the stage, I would already be picturing a YouTube video of my rout with a title like 'Ignorant Indian gets publicly walloped by Tarantino.'

Ever heard of bringing your whole country down with you?

Most people who have hated a celebrity viciously and then turned into their lifelong fans upon meeting them just once insist that it's when you are only centimetres away from a celebrity that the glory of his achievements dawns on you in the most linear fashion.

And while this dawning expands the Celebrity's frame even further, what really gets you, is the gregariousness he designs just for you.

The man who has a zillion things happening in his life at any given moment has suddenly shifted all his attention to you. All the big numbers, the women, the Ferraris, his restaurant business, his ranch in Dubai, his personal Japanese maids in kimonos and his Seychelles holidays, his bitches and his bombs can rest for some time; for only you matter to him right now.

Now this knowledge makes his gregariousness seem even more monumental and also one that seemingly borders on danger. You wonder if this gregariousness is real, if the smile isn't actually a put-on (the kind of smile that people smile when they are really angry?), and if the arm-wrap would turn into a vice-like grip on your neck any time.

You feel you are 'in' his world, but you ask yourself if it is all a little too easy. You understand very well the respect he is silently seeking -- a little price for his decency -- and you give it to him readily. And what's worse? You don't even realise that it is respect motored less by logic and more by pure fear psychosis.

IMAGE: Celebrities who are natural Padrones mask their Padrone temperament with certain playfulness.

At that moment in time, any Celebrity would seem like a Padrone. They will reveal to you their grandness and also the command that that grandness has given them. Without them even trying, you also see the shiftiness they could be capable of.

If there's a pause between questions, you would very clearly hear the click-clack-click-clack sound that their shoe heels make. Now, that's perilous. It's exploitation art at its best, where the exploitation itself is largely silent and self-induced.

But does this all mean that Celebrity criticism is unwarranted? I don't think so. Especially not in a world where a large part of Celebrity-marketing, PR and the entire saccharine-machinery is deployed to make you feel lonely if you don't love someone who is so loved by the rest of the world. And to objectively judge a celebrity's worth, despite it being unfashionable, is to display a very specific sort of courage.

What we don't realise, though, is that the position a Mass Celebrity enjoys can never be attributed to luck alone; and that there is certain worldly smartness that has worked for him, and which will always bail him out.

This means that the sum total of his life experiences would, at any rate, seem far greater than one of your stray observations.

And all this means that, maybe, even a Celebrity's mediocrity, his shortcomings and his seeming incompetence, is just another part of his legacy -- just those things that complete his narrative.

So to question all that from your living room is one thing and to own up to your observations when your chins are touching each other's at a press conference, is something totally different.

Ferris was perhaps jolted into reality only when Dhoni reminded him that he had left his microphone up on the dais. That reminder was, maybe, the epilogue equivalent of Dhoni's 40-second theatre.

As much as we talk about fairness and equality in this world, the truth is that a Celebrity, like a Padrone, is touched by a special kind of divinity that we are not. And the world-stopping appeal of these larger-than-life names is part of their everyday theatre.

The stage -- that we may momentarily share with them and which may seem disconcerting to our usual flow -- is where they operate out of every day. And while it's a stage that would humble us, it is also a stage that feasts on their natural charm.

Of course, all this may all sound unfair, but there it is -- nature is unfair. 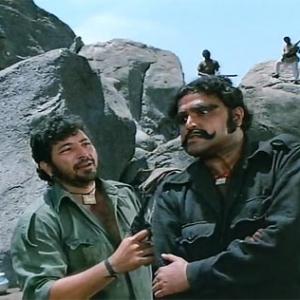