The Age of the Loh Purush

Overt displays of physical machismo is the stamp of the strongman and it's a symptom that manifests itself in direct proportion to their sense of insecurity, says Kanika Datta. Even by his own low standards Donald Trump's performance on the White House balcony was astonishing.

Still infectious, impervious to the danger he was posing to his staff, he stood unmasked, heavily made up and unmistakably out of breath to assure his supporters that there is nothing to fear from COVID-19.

Only his adoring fan base will imbibe that message.

To others, especially relatives of the over 200,000 Americans who have died from this disease, his 'recovery' underlines the lack of access to the same standard of medical care available to the President and his many White House and Pentagon colleagues who have been infected via the super-spreader-in-chief.

Trump may be one of the most physically unfit of post-war US presidents but he is no outlier in the strongman pantheon in equating illness with weakness -- witness his baiting of Democratic presidential contender Joe Biden for campaigning mostly in safe virtual mode.

Overt displays of physical machismo is the stamp of the strongman and it's a symptom that manifests itself in direct proportion to their sense of insecurity.

Mao Zedong set the standard 54 years ago with his 'world record-breaking swim' in the Yangtze.

The political significance of that event -- reported with dutiful hyperbole in the local press -- was evident only years later.

Teaching India a salutary lesson in Arunachal Pradesh in 1962 may have awed his party rivals but would not have registered with the Chinese people in the same way as a highly publicised swim in this most hostile of rivers.

What the spin doctors did not note, of course, is that that riverine plunge marked the start of the decade-long Cultural Revolution that eliminated his rivals.

Uganda's dictator Idi Amin modified this technique by the simple ruse of 'winning' all swim races against those of his ministers he hadn't disposed of, as the film-maker Louis Malle brilliantly portrayed, but it was Russia's Vladimir Putin who added panache to the strongman culture.

Putin shares with Stalin not just his diminutive height -- 5 ft 6 inches and 5 ft 4 inches respectively -- but also his chronic insecurity.

But Stalin, pockmarked and with a deformed arm, dealt with his psychological weakness with a thoroughness that precluded the need for displays of physical prowess: All his rivals were exiled to Siberia, executed or both.

Plus, of course, he defeated Germany in World War II, the feat that entrenched him in power after 1945.

Putin lives in the globalised information age, so he can get away with the murder of an adversary rival or dissident here, the arrest of girl band there and pauperise rival billionaires, but even he stops at wreaking the Stalinist brand of wholesale destruction.

Instead, Vladi, the judo back belt, who has chopped the Russian constitution by running for president four times and announcing plans for a fifth term come 2024, felt the need to bare his torso and his dominance over nature in 2018, soon after he was elected to the presidency by a highly suspect 76 per cent majority.

Earning a well-earned rest from excoriating global criticism a month later, he uploaded topless photos of himself vacationing in Siberia, the camera lovingly playing over his six-packs.

Something must have resonated with the public because in September he posed topless again, this time with an assault rifle.

In New Delhi our own 21st century loh purush, he of the 56-inch chest and bespoke suit monogrammed with his name, has displayed an awesome fitness by performing challenging asanas in public on the day he designated as World Yoga Day.

Then there was his appearance with Bear Grylls, the man best known for his televised assaults on nature, just after a second stunning electoral comeback, despite the best efforts of the Khan Market Gang.

But Mr Trump's pandemic performance differed from his fellow strongmen in one critical way.

None of the others have sought to defy the virus.

Whether it is Viktor Orban in Hungary, Recep Tayyip Erdogan in Turkey, Rodrigo Duterte in the Philippines or Narendra Modi, all are conscientious about wearing masks, observing social distancing and enforcing these protocols on the public (the exception is Brazil's Jair Bolsonaro, who resembles Mr Trump in more ways than one).

Instead, all of them leveraged the pandemic to strengthen the levers of their power.

Mr Duterte has launched a crackdown on maskless Filipinos on the same lines as his war on drugs; Mr Orban used the pandemic to acquire emergency powers (since lifted) and close his country's borders.

All of them, Mr Modi included, enjoy a high degree of popularity for their handling of the pandemic.

But the Electoral College could always state otherwise. 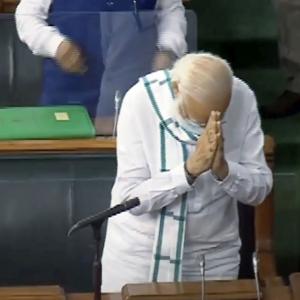 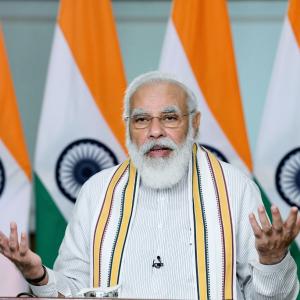