The 2019 poll is a special challenge

'The Republic is currently captained and crewed by people who seem interested in the safety and well being of only a select kind of passenger, advising the rest to swim for Pakistan,' points out Mitali Saran.
Illustration: Uttam Ghosh/Rediff.com Republic Day is traditionally the time to reflect on our history and make fun of the floats. Everyone has their favourite marching contingent, most of us are happy to have the day off, and who doesn't love a good flypast? It only remains to ditch the joyless belief that national days should be alcohol free.

Still, after four years of loud chest-thumping, this year's Republic Day felt slightly subdued. People are so busy sulking at each other across political differences that it is hard to paste a smile on, though we can still encourage each other to go fly a kite.

Politicians in particular cannot afford to be misty-eyed about the past -- they are keeping their eyeballs polished and beadily focused on the future.

The big old ship of the Republic has weathered plenty of horrendous storms, and will see plenty more. But the 2019 general election is a special challenge, and everyone knows it.

The Republic is currently captained and crewed by people who seem interested in the safety and well being of only a select kind of passenger, advising the rest to swim for Pakistan. So it has been a hoot to watch politicians across the board sink their egos, gather on the same platform, make seat sharing agreements, and shake hands across their differences, swearing to oust Narendra Damodardas Modi's government.

They are even saying nice things about each other occasionally. And chances are, for a change, that they are doing it all for the right reasons.

Those reasons should be familiar to those who saw the Emergency, when even the Sangh held hands with their mortal enemies the Commies, to oust Indira Gandhi; but oddly, Mr Modi is spending a lot of rally time crying, 'No fair, all they want is to get me out.' It is as if he has no idea what elections are for.

Even Priyanka Gandhi Vadra, who thus far has steadfastly remained a backroom operator and election campaign cameo player, has taken an official seat at the table. I can't imagine too many other political situations that could have convinced her to do so.

Her actual effect on Congress party workers and on the electorate remains to be seen, but she has plenty of fight to bring eyeball to eyeball with the prime minister, and what could be more fun than to watch him have to diss a smiling young woman?

On the subject of gushy comparisons between Priyanka and Indira Gandhi, one can only hope that they don't run too far beyond the striking physical resemblance. We should all hope that the Gandhi siblings's youthful idealisation of their grandmother, in her capacity as politician, has been tempered by a long and clear-eyed study of power.

Both Indira Gandhi and Narendra Damodardas Modi have shown that a. leaders who fear losing power can wreck a country, b. strong leaders tend to overestimate their own strength and popularity, and c. there are many ways to skin a democracy, each of them very effective.

I like the idea that that Priyanka Gandhi comes to an official role in politics after spending a great deal of time examining herself and her motivations.

And I, for one, am always glad to see one more intelligent, secular, and apparently compassionate person throw her hat in the ring. We'll find out, over time, what she is made of.

The idea of a Mahagathbandhan, or Grand Alliance, is regularly pooh-poohed as a useless khichdi of people who spend all their time jockeying for power. I would say that 'Grand Alliance' sounds like something out of a Tolkienesque wizarding war, and wish it could be toned down to 'Greater Alliance' or something, but it beats me how people can so easily forget that coalitions have done their fair share in bringing India into the 21st century, not to mention that this time the protagonists have uncommon common cause.

A coalition might involve slower consensus and be more difficult to manage, but a secular, diverse coalition would almost certainly do less damage than the strong, centralised Hindutva-inclined leadership we have now.

A smart coalition will never forget that what it is fighting today, it will be fighting for a very long time.

The heart of every January 26 celebration, ultimately, is the citizen -- that long-suffering creature, shafted by every government in one way or the other, and justifiably cynical -- who periodically recreates the Republic from the voting booth.

This year, as the tanks rolled and the camels preened, we cheerily took the day off to celebrate the fact that this summer we get to extend its life once again. And, of course, to make fun of the floats. 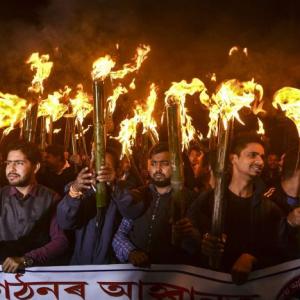