The extent and nature of India's role in the ongoing turmoil in West Asia must be defined primarily by its strategic interests in the region. Few are, however, sure if New Delhi has any idea about its regional strategic interests, says Harsh V Pant.

Events are moving rapidly in Syria. The country is being drawn into an abyss and no one is quite sure what consequences this will have for the region and the world at large. Earlier this week, Syria's prime minister, Riyad al-Hijab, defected to Jordan, becoming the most senior official to quit the embattled government of President Bashar al-Assad.

In his statement he said that he had resigned to protest his government's harsh tactics in confronting the opposition. "I am announcing that I am defecting from this regime, which is a murderous and terrorist regime," the statement said. "I join the ranks of this dignified revolution."

Hijab's departure followed an accelerating stream of defections from Syria's armed forces, including that of Brigadier General Manaf Tlas, a former confidant and close friend of Assad's who fled to Turkey a month ago, then went to France to join his father, a once-powerful former defence minister. These defections are certainly a sign that the Assad regime is facing its dénouement.

But the regime is clearly willing to fight on. The Syrian military meanwhile is busy blasting Damascus and at least half a dozen cities around the country with artillery even as fierce clashes continue to rock the northern city of Aleppo, the country's largest.

Iran, Syria's closest ally, has hosted a meeting in Tehran to discuss options for resolving the crisis in Syria. Among the issues that were at the front and centre was the fate of a group of 48 Iranians captured in Syria last week. The Iranian government has said that the kidnapped Iranians are pilgrims who were on their way to Sayida Zeinab, a Muslim shrine south of Damascus that is popular with Shiites.

This contending view underlines the regional dimensions of the conflict, as rebels backed by pro-Western powers in the Middle East, including Turkey and Saudi Arabia, battle the regime of President Bashar al-Assad, backed by Russia and Iran, for control of towns and cities across the country.

Syria has made it clear that it blames Turkey and the Arab countries of the Persian Gulf for recent rebel advances. Iran sees Turkey as a competitor for regional influence. Tehran is alarmed at renewed ties between Egypt and Saudi Arabia which constitute, at least in part, a thinly-veiled alliance of "moderate Sunni Islam" against Shia Iran. The fall of the Assad regime would leave Iran completely isolated in the region and this is making Tehran nervous.

Iran's security chief was also in Syria, trying to shore up the alliance. He told President Bashar al-Assad that Syria is part of a vital regional alliance that Tehran will not allow to be broken. During talks in Damascus, Saeed Jalili said Syria was an essential part of an "axis of resistance". "Axis of resistance" refers to Iran, Syria, Hezbollah in Lebanon and the Palestinian Islamist group Hamas in Gaza.

Assad was seen on television after a long time during Jalili's visit as has made one appearance since the assassination of four top security officials on July 18.Syria is one of Iran's most important allies - a pro-Iranian foothold in the Arab Middle East and an important conduit for contacts between Tehran and Hezbollah in Lebanon, and Hamas in the Gaza Strip.

Amidst this gathering storm, India needs to carefully calibrate its policy. Last week it abstained from voting against Syria on a Saudi Arabia-drafted United Nations General Assembly resolution. Though the resolution found overwhelming support among members of the General Assembly, India was among the 31 states that abstained while 12 other states voted against it. India wanted the General Assembly resolution to drop reference to the July 22nd Arab League resolution that called upon Assad to step down. But that could not happen. Now India officially wants the resolution of the Syrian crisis through dialogue and political processes, but it is increasingly clear that that is no longer a viable option.

And so now New Delhi should think creatively about West Asia. The point is not that India should stand in solidarity with its BRICS partners or that it should support Western policies. This is a faux debate that has been resurrected in sections of the Indian commentariat. The real issue is: What are Indian interests in the region and how best they can be preserved and enhanced in a rapidly changing regional milieu? It is clear that massive changes are taking place in the region and Syrian situation is going to accelerate this change. New Delhi will have to answer big questions about its West Asian policy first before it can justify its every vote and stand at the global fora. The extent and nature of India's role in the ongoing turmoil in West Asia must be defined primarily by its strategic interests in the region. Few are, however, sure if New Delhi has any idea about its regional strategic interests. 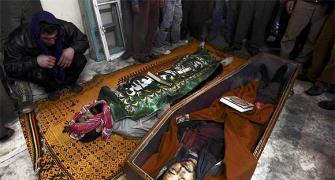 The killing fields of Syria 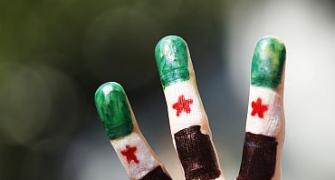 Tour diary: Amid all the violence, humour hasn't deserted Syria
The selective winds from the Arab Spring 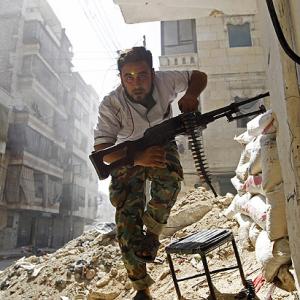 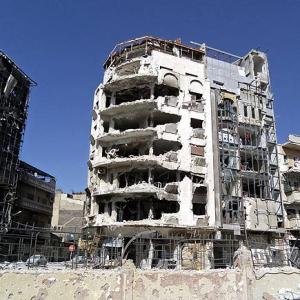 IN PHOTOS: The Syrian catastrophe continues