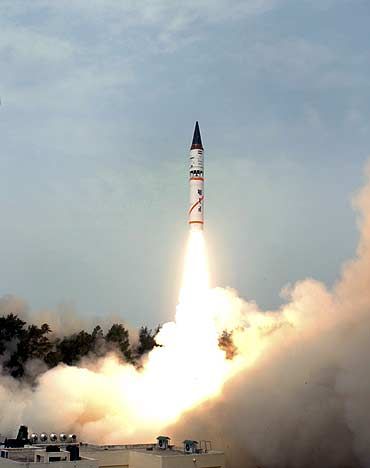 DRDO's latest test towards developing an anti-ballistic missile shield, to protect Indian targets against nuclear-tipped ballistic missiles fired from Pakistan or China will provide a technology that is akin to striking a bullet with a bullet, say Ajai Shukla

On Sunday or Monday, in Chandipur, Odisha, the Defence R&D Organisation will test-fire an interceptor missile, whose task is to hit an incoming ballistic missile target, in this case a Prithvi missile fired a few minutes earlier. The test is akin to striking a bullet with a bullet.

This will be DRDO's latest test towards developing an anti-ballistic missile shield, to protect Indian targets against nuclear-tipped ballistic missiles fired from Pakistan or China.

In 2011, former DRDO chief Avinash Chander had told Business Standard that an ABM shield would protect the national capital within three years ('Delhi could have anti-missile shield by 2014', August 29, 2011).

However, the shield's components are still being refined, and the government is not likely to sanction operational deployment of what will be a highly controversial measure until after the shield is fully tested.

An ABM shield is controversial because it destabilises nuclear deterrence, encouraging a country to believe it can launch a nuclear strike while successfully defending itself against retaliation. At the height of the Cold War, the US and the Soviet Union signed an Anti-Ballistic Missile Treaty severely restricting defensive measures on both sides, to preclude this.

Pakistan believes its arsenal of about 100-120 nuclear warheads, and the missiles, aircraft and other means to deliver them, are sufficient to deter India's military. Were India to protect cities such as Delhi and Mumbai with ABM shields, the Pakistan Army would almost certainly build more nukes and plan to fire a larger number at defended cities, to saturate and overwhelm their ABM defences.

An ABM shield has three functional components: First, a radar network that detects enemy ballistic missiles soon after they are launched, and then tracks them along their flight path. The range of a ground-based radar is limited by the earth's curvature, while a satellite-based radar picks up a missile as soon as it is fired. The second component is a command and control system that plots and predicts the enemy missile's flight path, and assigns interceptor missiles to destroy the intruding missile. Third, the ABM shield has interceptor missiles that a "guidance radar" guides onto the incoming enemy missile, destroying it before its nuclear warhead can do any damage.

Given the proximity of India and Pakistan, the entire engagement timeframe, from launch to interception, is between 5 and 10 minutes.

The interceptor missiles are still being refined before being produced in large numbers for deployment. DRDO sources say Monday's test is a part of this. They are of two kinds: An exo-atmospheric missile, called the Pradyumna, which intercepts the enemy missile while it is still in space, i.e., at heights of above 50 kilometres. As a back-up, an endo-atmospheric missile, called the Ashvin, is launched to strike the incoming missile in the upper atmosphere, i.e., at altitudes of 20-40 kilometres.

While interceptor development continues, two Long Range Tracking Radars (LRTRs) - built by the DRDO and Israeli company, ELTA, and with ranges of 800-1,000 kilometres - were moved to Delhi a year ago, where they are being integrated into the Indian Air Force (IAF) surveillance network.

"These are not part of an ABM shield, but of the IAF's air defence radar network, which watches Indian airspace for intruding fighters," says a top DRDO scientist.

Even so, while the LRTR is currently undergoing testing as part of the IAF network, experts say it could eventually form part of an ABM shield.

DRDO sources say that satellite surveillance is not yet part of the ABM shield. "That will be an addition to the system, providing an extra crucial five minutes of warning time by monitoring enemy territory and picking up the actual launch of a missile," says a DRDO scientist.

The range from which an incoming missile is fired is a key determinant of whether it can be intercepted successfully. The further its origin, the higher and faster it must go, and the more difficult it is to shoot it down. Currently, the Pradyumna and Ashvin have proven they can strike missiles fired from up to 900-1,000 kilometres away.

Pakistan's longest-range missile, the Shaheen III, which can travel 2,750 kilometres, cannot be used against, say, New Delhi, which is barely 700 kilometres from Pakistan. To avoid overshooting Delhi, Pakistan would have to use its shorter range Abdali I and Shaheen I missiles.

Lieutenant General (Retired) Khalid Kidwai, the advisor to Pakistan's National Command Authority and for 15 years that country's nuclear czar, told the Carnegie Endowment for International Peace on March 23 that the Shaheen III missile was developed to bring the Andaman & Nicobar Islands into range and prevent India from basing nuclear weapons there.

"Pakistan cannot allow any land mass of India to be out of range," said Kidwai.

However, China targets India with the advanced, solid-fuel Dong Feng-21 (NATO designation: CSS-5) medium range ballistic missile, which has a range of 1,700-2,000 kilometres.

India's current ABM shield would be unable to intercept an incoming DF-21.