'His popularity is still high; respect for his intellect and integrity is still discernible; but his long night may just be beginning,' says Ambassador B S Prakash.
Illustration: Dominic Xavier/Rediff.com 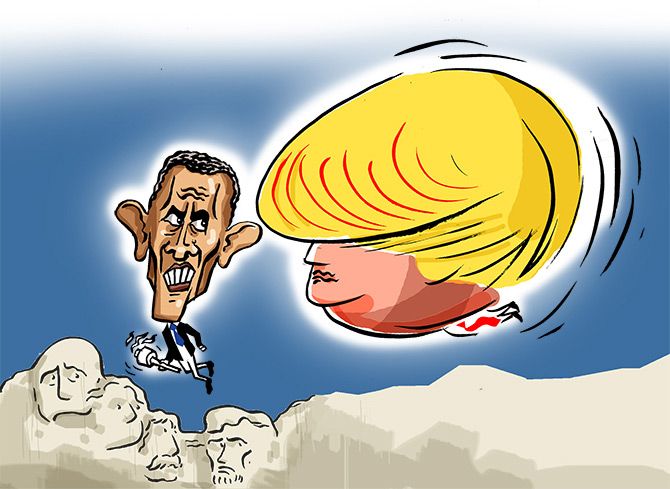 Barack Obama, a cerebral President, has always been conscious of history, American history in particular.

Read some of his many thought-provoking speeches and they are littered with references to Lincoln, Jefferson, FDR, Kennedy and even Reagan or Clinton, depending on the context.

Some of his soaring oratory talked of the 'long arc of history,' in simple words, the seemingly long time that it takes for social or political processes to take effect; another of his favourite expressions -- 'working towards a more perfect Union' -- implied the striving towards the ideals enshrined in the American constitution.

'Legacy' is important to Obama.

Think of that and then spare a thought for poor Barack Obama as he contemplates his own legacy, even as Donald Trump gets ready to tear and destroy whatever Obama has tried to build.

What a tragic and bitter 'legacy of ashes.'

Granted, the legacy of politicians is a curious phenomenon. In American history, it is only some of the founding fathers whose reputations are rock solid, and are indeed embedded in rock at Mount Rushmore. Abraham Lincoln and Franklin Delano Roosevelt share that honour.

For others, it is a question of luck. Jimmy Carter was a big failure as a President, but his achievements post-Presidency are more impressive. Ronald Reagan's flaws and limitations were known and no one accused him of being a great intellect, but his reputation as an endearing and optimistic leader endures.

Lyndon Baines Johnson and William Jefferson Clinton have both admirers and detractors. George W Bush made colossal mistakes and was inept in every way, but is slowly being regarded as a 'decent fellow' who has been gracious in retirement.

Why, America, in India too reputations and remembrance of Nehru, Patel or Ambedkar have changed depending on the prevailing class and sentiment.

So, how history will regard Obama is certainly a 'known unknown' at this point in time. But I can hardly find a parallel to someone whose careful construct is being ripped apart so soon and with such disdain.

Let us look at the picture.

On the domestic front, Obama had thought that his enduring contribution would be the healthcare reform that has come to be known as Obamacare. He had hoped to be remembered for providing health insurance to millions of poor Americans for the first time.

And now Trump has made it his mission to dismantle it asap as they say.

Take every other domestic policy. Obama tried for social inclusion: Integrating Blacks, Hispanics, the LGBT community, minorities et al. He consciously projected himself as looking after the concerns of all Americans, and not especially of African Americans, sometimes to their criticism.

Trump has won this election catering to a majority without masking his dislike of minorities and on virtually a racist platform.

Obama did try but could not do much for gun control in the face of implacable opposition by the gun lobby.

Trump comes to office beholden to them and will not envisage any restrictions.

Obama's tax and social policies were 'socialist' to some extent, as we Indians term it;

Obama could not achieve anything on immigration reform, but was aware of the complexities of ruthless enforcement against illegal immigrants.

Trump swears by it. And so on.

We turn to world views and foreign policy. To start with big global issues: 'Climate change' was close to Obama's heart and he would have believed that to make America respond to the concerns about its emissions and to forge pacts with other big countries will be regarded as his lasting contribution.

Trump, on the other hand, seems to believe that the subject is a hoax, is in a hurry to reverse American thinking about environmental concerns, and as a result may undo global agreements.

Obama's understanding of terrorism was nuanced and sophisticated and he was careful in not equating all Muslims with terrorists.

Trump's stated approach is the opposite, though the realities of the geopolitics of the Islamic world are already making him pause.

Obama believed in the inevitability of globalisation and looked at it in terms of both opportunities and challenges as academics or analysts do. He was a proponent of free trade and ambitious trade agreements.

Trump focuses on job losses in America and his support base is made of victims of forces of globalisation.

Obama believed in the classical facets of US foreign policy -- European partners in NATO, security assurances to Asian allies like Japan and Korea. He was committed to international institutions that have also served US interests for six decades.

Trump does not understand or trust much of these, and his 'America first' impulse makes him reluctant to talk of alliances or pacts or institutional obligations.

One strange similarity in foreign policy should be noted though. Obama was the first American leader to begin to talk of the limits of American power, to begin to recognise the inevitability of challenge by other powers. He was a reluctant warrior after the experiences of Iraq, Afghanistan, and Libya.

Trump comes to these issues from another direction and so far does not see the point in American military involvement in causes or regions that does not frontally threaten American interests.

'To make America great again,' his slogan implies that America is not all that great right now, a sentiment that Obama may understand.

I do not need to say much about their personalities as Presidents.

Trump from what we have seen so far is hot, impulsive, aggressive, opinionated, decisive... He may change of course. Or he may not!

Obama had faults. Most critically, he was not a full politician with the zeal and passion for his causes. He seemed Hamlet-like, a bit indecisive, a bit disdainful even towards his supporters, a bit detached and disinterested.

History may record that he did not bring his full energies or capabilities to the causes that were dear to him. He regarded the rough and tumble of politics and its wheeling-dealing as beneath him.

But his current fall in stature or the pessimism that may cloud his outlook is not due to these factors. It is more that he has been unlucky, indirectly, by association.

His preferred successor and his party was trounced in the elections and his successor-designate is someone who is likely to totally reverse his direction.

How different it would be if Hillary had won though she is not his acolyte either.

So, once again spare a thought for Obama as we think of him thinking about his legacy.

In many of the assessments of Presidents that American popular history Web sites routinely do, Obama fared near the top with Thomas Jefferson, Lincoln and FDR.

But this was before the election. His popularity is still high; respect for his intellect and integrity is still discernible; but his long night may just be beginning.

From the above, it would be clear that this has been penned by a Obama fan. I have been one from the time that I read his first book Dreams from my Father in 1995 before he became a US Senator, let alone the President.

I had come to view him as an illustration of the idea of philosopher-king that Plato had enunciated. I will now wait for the honest, and self-reflective memoir that he may write hopefully in the none too distant future.

Ambassador B S Prakash -- who served as India's consul general in San Francisco during some of the Bush years -- has been a long standing columnist for Rediff.com
You can read Ambassador Prakash's earlier columns here.