Opponents of the CAA and NRC have gone to town accusing the BJP of an ulterior motive (read, disenfranchisement of Muslims) in implementing the NRC.
By the same token it can be alleged that anti-CAA opponents have a nefarious agenda in mind that would be scuttled by the implementation of the NRC: Namely the accrual of dedicated vote banks and the restoration of Muslim hegemony over at least parts of India, especially Bengal and Assam, argues Vivek Gumaste. 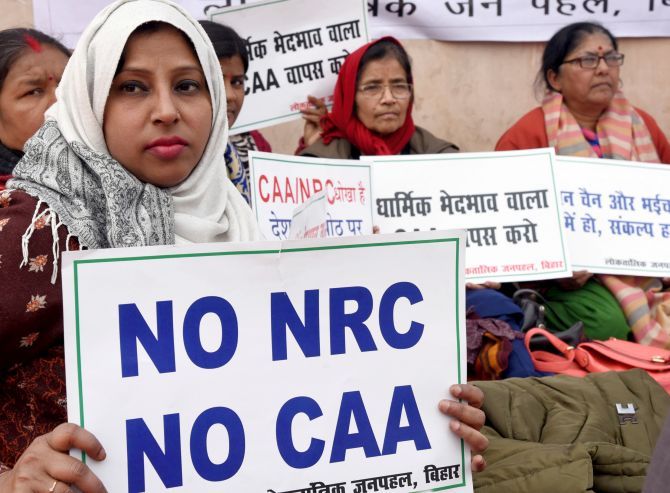 IMAGE: A protest against the CAA/NPR/NRC at Gandhi Maidan in Patna. Photograph: ANI Photo

Will the NRC discriminate against Muslims who are legitimate citizens of India?

The charge that the CAA is a prelude to the NRC that will be used to target Muslims and render them stateless is a myth of unmitigated proportions.

No anti-CAA opponent including the so-called public intellectuals and the voraciously voluble TV anchors and newspaper columnists have been able to proffer a plausible explanation for this baseless accusation.

They are indulging in hit and run tactics under the assumption that they will not be held accountable amidst the din that has been engendered.

Let us examine specific social factors that may compromise an individual's ability to negotiate the NRC and its requirements.

The contention that only a poor illiterate Muslim because of his inability to obtain required documentation will be affected by the NRC is not based on evidence; it is a provocative, incendiary political ploy.

According to the 2011 Census, illiteracy rates among Hindus and Muslims were 42 and 36 per cent respectively. When translated into actual numbers these figures will be 30 crores for Hindus (36 per cent of 96 crores) and 7 crores for Muslims (42 per cent of 17 crores).

So, using these figures, if illiteracy is the glitch in implementing the NRC it will prove more discriminatory to a larger number of Hindus than Muslims unless you subscribe to a theory that an illiterate Muslim is more illiterate than an illiterate Hindu.

Similarly, economic disparity between the communities (external link) is not that significant to be a game changer.

According to the NSSO survey, the average per capita consumption expenditure (used as an indicator of income) among Muslims is just ₹32.66 per day, which is the least among all religious groups. It is highest among Sikhs (₹55.30), followed by Christians (₹51.43) and Hindus (₹37.50).

In current times a 5 rupee/day difference will not amount to a significant enhancement of social status to give the person any advantage in negotiating the NRC.

The NRC may not be a foolproof system at present and may need further refinement to be more effective and accurate, but one thing it is not -- an instrument that can be manipulated to discriminate against Muslims; Hindus and Muslims who are legitimate citizens of India will be in the same boat.

By deliberate misinformation, an ideologically entrenched liberal lobby has willfully fed into the paranoia prevalent in the minority community to stoke unwarranted concerns, fueling extremist elements in a community prone to radicalism in the process.

Liberals do not do the Muslims any good. By provoking unwarranted anxiety and enhancing radicalism they are creating an insecure, volatile and dangerous polity within the country.

Is there a sinister agenda behind the anti-CAA-NRC protests?

Opponents of the CAA and NRC have gone to town accusing the BJP of an ulterior motive (read, disenfranchisement of Muslims) in implementing the NRC.

By the same token it can be alleged that anti-CAA opponents like political parties and radical Muslim elements have a nefarious agenda in mind that would be scuttled by the implementation of the NRC: Namely the accrual of dedicated vote banks and the restoration of Muslim hegemony over at least parts of India, especially Bengal and Assam.

It is common knowledge that there has been a dangerous demographic alteration going on the states of West Bengal and Assam since the 1800s till recent times with districts bordering Bangladesh registering a disproportionate rise in the Muslim population that cannot be explained by existing fertility rates in the community -- in effect confirming illegal migration from Bangladesh.

Even way back in 1991, with less impressive numbers, the scenario was disturbing. Out of a population of 28 million in the border districts of West Bengal, Muslims accounted for 17 million, leading T V Rajeswar, an ex IPS officer and IB chief who served as governor of West Bengal, Sikkim and Uttar Pradesh to sound a warning: 'There is a distinct danger of another Muslim country, speaking predominantly Bengali, emerging in the eastern part of India in the future, at a time when India might find itself weakened politically and militarily.' (S P Sinha. Lost Opportunities, Lancers Publishers, 2007).

Elaborating on these demographic changes in Assam and West Bengal, Arun Shourie in an article in 2004 (Right on Course, Indian Express, October 9, 2004) surmises, '...the creation of a third Islamic State out of India is right on course'.

So, is the current anti-CAA-NRC protest an attempt by radical elements to safeguard the Muslim advantage in these areas garnered by illegal migration of Muslims from Bangladesh in the past so that India's sovereignty can be compromised at an opportune time?

And does this plan have the blessings of political parties whose vote banks will be preserved by rustication of the NRC?

These are disturbing questions germane to this protest.

Are detention centres unique to India?

Let us be clear about one thing. Detention centres are not concentration camps. The attempt to convey this impression and thus draw a parallel between India under the BJP and Nazi Germany is irresponsible and mischievous scare mongering.

Detention centres are not unique to India. In fact, every sovereign nation including the major western democracies like the US, UK and France -- all have detention centres.

According to the Global Detention Project (external link), the United States possesses the largest immigration system system in the world with at least 637 detention centres which housed about 400,000 illegal immigrants in 2018.

France has one of Europe's oldest detention systems in place; in the UK detention centres go by the name Immigration Removal Centres and even Switzerland has 32 such facilities.

India has only 10 operational centres (6 in Assam and 1 each in Delhi, Goa, Rajasthan and Punjab) with six more under construction or planned. Currently there are barely 1,000 people in detention.

Compared to the highly sophisticated and stringent anti-irregular immigration systems in place in most Western democracies, India's anti-immigration infrastructure is primitive and exceedingly benign; even when fully completed is unlikely to reach the capacity or stridency of the West. So, let us cut the crap from projecting Indian detention centres as some form of concentration camps.

In summary, a humanitarian Act in keeping with our tradition meant to provide succour to deserving, persecuted minorities from India's neighbouring Islamic countries has been turned on its head.

It has been craftily distorted by violence, misinformation and by exploiting insecurity among Muslims to project it as divisive instrument of hate and discrimination; a Machiavellian exercise of diabolical intent and proportions.

The anti-CAA-NRC protests along with the resolutions passed by some state assemblies are in effect a frontal attack on our Constitution, our sovereignty and the fundamental structure of our democracy.

It is imperative that those at the forefront of this travesty of truth, especially public intellectuals, look at themselves in the mirror: they will be surprised to see a grotesque demon covered with vitriol staring back at them.

Academic Vivek Gumaste, who is based in the United States, is the author of My India: Musings of a Patriot. You can e-mail the author at gurhastev@yahoo.com