As a civilian, I always felt moved by the Amar Jawan Jyoti.

The eternal flame housed at India Gate in New Delhi was recently merged with the flame at the newly built National War Memorial.

What we see; what we don't

What engaged me about Amar Jawan Jyoti wasn't as much the flame as the combination of flame and the specter of inverted rifle with helmet atop.

Wikipedia's page on Amar Jawan Jyoti said it consists of a marble pedestal on which a cenotaph is situated. 'Amar Jawan' (Immortal Soldier) is scripted in gold on all four sides of the cenotaph and on top, a L1A1 Self-Loading Rifle stands on its barrel with a helmet of the Unknown Soldier on top. The pedestal is bound by four urns, one of which holds a continuously burning flame.'

Although some frown on the gun and helmet-design (and indeed the whole Unknown Soldier paradigm) as borrowed from Western tradition, for those like me who view it simply as an emblem hailing from the military, there is something poignant about the arrangement.

The solitary helmet and the way it sits on the rifle butt betrays a sense of human predicament summariSed, the final rest and the oneness with universe beyond.

There is a touch of -- this bareness is all there is to life.

As critical as what we see, is what we don't.

We can almost imagine a wounded person beside the rifle and helmet; somebody we don't know, somebody we may never know, but someone who connects to us nevertheless because he/she fell so that we may live.

Another way of perceiving the rifle and helmet is to fill the gaps in the physical depiction -- one option is to imagine a pair of tired hands, fingers interlocked and resting atop that rifle as soldier pays respects to fallen comrade.

The helmet would be on human head lowered in grief and respect.

Remove the human figure and what you get is the gist -- inverted rifle with helmet atop.

The rifle and helmet are a study in minimalism but profound in what they convey.

In some ways, it reflects the quality of war.

Extreme situations peel off the dispensable layers of human life and make that which matters, rise to the fore.

It is life stripped of all embellishment. Which is why, as we view Amar Jawan Jyoti from our hugely layered existence, it is important to emphasise the angle that is least obvious -- every soldier fallen in the line of duty is both a noble ending and an avoidable demise.

There is something terrible and tragic in accepting conflict as the normal state of human existence.

If only humanity learnt to end its instinct for war and conflict.

It is not a notion to be trivialised today because our world clearly has a self-perpetuating industry of war.

The 'unknown' in The Unknown Soldier brings to fore the scale of devastation, war means.

The loss of life is so much that we don't know who all died.

To the eyes of this author, the poignance of Amar Jawan Jyoti stemmed from the less obvious point for contemplation.

It stood for all the fallen -- named and unnamed -- and it prompted us to reflect on why they fell, all the way from the immediate reason of dying while protecting us to why such deaths happen despite human evolution.

Doesn't the human species capable of nuclear weapons and advanced weaponry also have in it, the required imagination to navigate its way out of tensions without resort to violence?

The unknown and the abstract

A great war memorial goes beyond the list of dead, to contemplation of the phenomenon of war.

The fact that it leveraged the abstract and didn't confine itself to recorded evidence, the fact that we embraced it and respected to it, made it an unforgettable war memorial.

Notwithstanding the Modi government's premium for memories rendered tangible through physical monuments, the abstract is what the new National War Memorial will also end up serving.

Its walls may contain more names of the fallen and there will be those visiting to see those names, but eventually, the human mind will realise that in the madness of war there is always the known dead and the unknown dead.

In the spacious environs of the new memorial, we will pause to think if the horrors were avoidable, maybe even why despite all the centuries of civilisation gone by such horrors persist.

And don't discount the possibility -- like Ashoka mourning after the battle of Kalinga, we may actually understand that it takes as much courage to stand up for peace as it takes to go to battle.

The phenomenon beyond the obvious is what great memorials evoke.

Memorials to The Holocaust and the bombings in Hiroshima and Nagasaki remember the dead, but also prompt us to ask why the tragedy happened.

Imagine India erecting a monument for what has arguably been the biggest trauma it endured in the past several years -- the COVID-19 pandemic.

It could either be a memorial for the dead or a monument to celebrate the health workers who toiled ceaselessly to provide care for the sick.

As in war, the number of those who lost their lives to the virus is disputed.

The disparity between official figures and what independent experts claim, is sizable.

Going by the latter, there are probably hundreds of unknown, dead.

Shift focus and imagine instead, a monument celebrating our health workers.

Will we build something to remember only the named or would we attempt celebrating the spirit of all those who worked hard (remember the pictures of health workers walking with vaccines through inclement weather and tough terrain?) to save us?

It is not for nothing that society and art therein, values the abstract.

It is an idiom that seeks out the essence of something, as perceived by the artist.

The essence of an experience sets you free to imagine the rest.

It assigns no limit to the awareness you seek.

Further, compared to India's politics and its unending habit of venerating leaders and kings from years gone by, Amar Jawan Jyoti's psychological imprint was light despite the gravity and palpability of sacrifice made and the human numbers represented within its tiny acreage.

The transfer of the eternal flame was smoothly done and within days, a hologram of Netaji Subhash Chandra Bose took its place at India Gate.

Can you imagine such willing surrender to the exigencies of the future if the same was done to the statue of a political leader, any of our gods or figures from history?

Among the hardest things to do in land wedded to self-importance and the desire to be remembered for generations, is dying unknown.

Not once did Amar Jawan Jyoti stop this nation from doing what it must.

Unlike the imagery around historical and political figures, manipulated to serve political goals and halt us in our tracks, the Unknown Soldier never stopped us from moving on.

In times of statues standing several hundred feet tall and contesting to be the biggest, the Unknown Soldier stayed unflinchingly dignified all of a rifle length and a helmet-tall.

From Mahatma Gandhi to Jawaharlal Nehru, Sardar Patel and Netaji, not one of them would be what they are, if they hadn't stood on the shoulders of others, if they hadn't enjoyed the support of the nameless many, several of who went on to rank among the unknown dead of whichever line of activity they represented.

For me, Amar Jawan Jyoti mattered because it acknowledged the 'unknown' and through it, the whole.

It made this country belong to all. Faceless and nameless, it was courage inclusive. 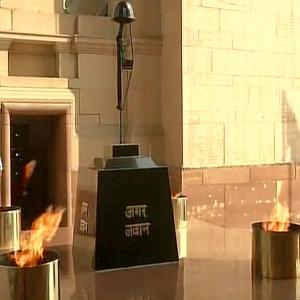 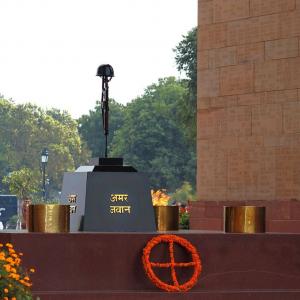