News
Business
Movies
Sports
Cricket
Get Ahead
Money Tips
Shopping
Sign in  |  Create a Rediffmail account
Rediff.com  » News » Trump Has Been Reined In For The Moment

But Trump is about to announce his candidacy for president in 2024.
And it is not clear if Florida Governor Ron DeSantis, the present hero of disenchanted Republicans, or Biden, who says he might seek re-election (but will decide in 2023), can checkmate Trump, notes Shreekant Sambrani. 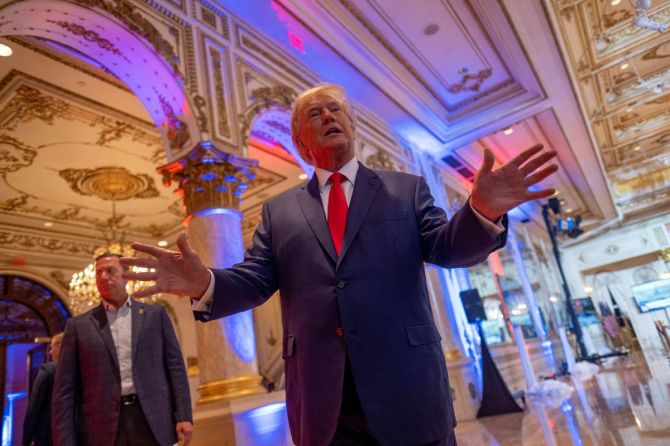 IMAGE: Former US president Donald J Trump talks to the media on mid-term elections night on the grounds of his Mar-a-Lago resort in Palm Beach, Florida, November 8, 2022. Photograph: Ricardo Arduengo/Reuters

The world can breathe now. The much feared red tsunami did not wash over the United States in the just concluded mid-term elections to all 435 seats of the House of Representatives and 35 of the 100 seats of the Senate.

Although some results are delayed (as in case of the Georgia senate seat, where no one got a clear majority and hence the top two must face a run-off in four weeks. This was the case in 2020 as well), it is almost certain that the Republicans will wrest the majority in the House from the Democrats.

The Democrats retained control of the Senate by victories in Arizona and Nevada.

The Republican majority in the House would be likely in the single digits, mirroring the present when the Democrats have a 5-vote edge.

The Democratic resurgence was also in evidence in a number of gubernatorial contests.

All in all, there was no bloodbath of the Blue party, it was in reality a red trickle, but red nevertheless. 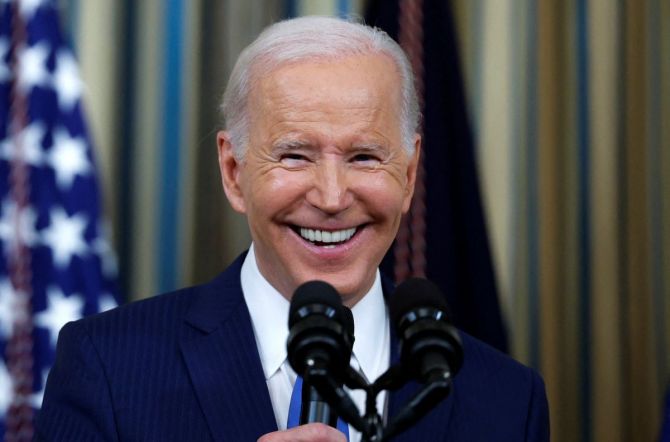 IMAGE: US President Joe Biden grins at a news conference after the mid-term elections at the White House, November 9, 2022. Photograph: Tom Brenner/Reuters

All this made President Joe Biden beam from ear to ear. Palpably relieved, he called it a good day for democracy. He had ample reason to be relieved.

The party of the incumbent president has almost always lost seats in the House in the first mid-term election in the new presidential term (exception: Republicans increased their tally in 2002 after George W Bush's election in 2000, almost entirely due to resurgence of patriotism after the 9/11 terror attack).

The 2022 loss of just around 10 seats is much smaller, which raised Biden's spirits.

But he should know better than anyone else that his task of getting his legislative agenda passed through a hostile House is a tough one.

As vice president, he was President Obama's pointsman in Congress.

Even though that administration got the Affordable Care Act passed, that was fought tooth and nail.

And the administration faced possible shutdown many times because a recalcitrant House would delay raising the public debt limit. Often only emergency payments were authorised.

In the present situation, while Biden's ambitious rebuilding programme has been passed, there could be numerous other roadblocks.

The Republican majority in the House would be joined by a small but significant band of conservative Democrats forcing the administration to accept modifications to its proposals.

But Biden has for the present vowed that he would carry on with his agenda. 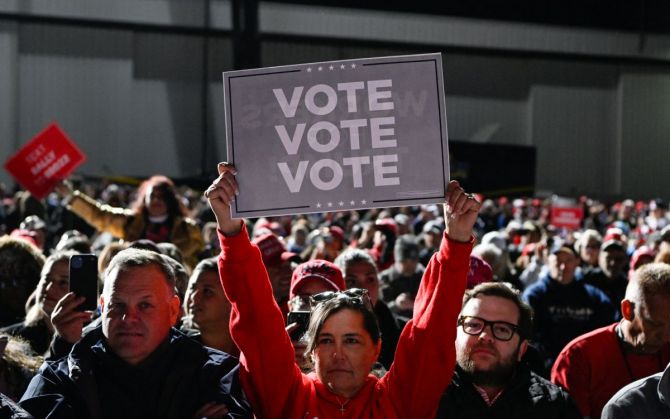 It would be interesting to watch how the new Republican-controlled House deals with the report of what is popularly known as the January Sixth investigation.

The House Committee did extensive probing of the events of that insurrection in 2021.

It is said to have completed its task, even as it awaits how former president Donald Trump responds to its subpoena, if he responds at all.

Its report is likely to be presented to the lame-duck House next month.

That would almost certainly lay the blame for the unprecedented situation at Trump's doorstep.

What action, if any, follows would now depend on the Republican speaker and the party.

For the moment, however, the extensive televised hearings of the committee brought the horror of that event home to the whole country.

Trump had endorsed a large number of candidates for the Congress who were deniers of the 2020 results and staunch adherents of his Make America Great Again (MAGA) credo.

He was quick to display his typical grift: Accepting results in case of victory, denying them in case of defeat.

Immediately after the trends became clear, he said he would probably be blamed, but that would not be right. After all, so many of those he endorsed have been elected.

A majority of House Republicans belong to this group. He even appeared to criticise his wife Melania for advocating the cause of Dr Mehmet Oz, whom he had endorsed for the Pennsylvania senate seat.

But the good doctor lost to Lieutenant Governor John Fetterman who had the added handicap of having suffered a stroke recently affecting his speech.

The Republicans were counting on flipping that seat in their quest for a Senate majority.

Political pundits are busy right now analysing how this turn of events came about.

The consensus seems to be that while Trump and his MAGA movement are still the dominant influence among the Republicans, the extent of that influence has been overstated.

Some even believe that while it still exists, it is now waning, American voters having returned from the brink. 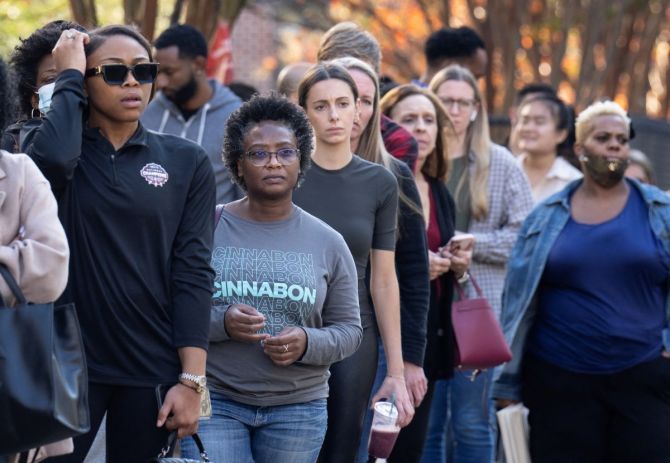 IMAGE: People stand in line for early voting in the mid-term elections at a public library and voting station in the Buckhead area of Atlanta, Georgia, November 4, 2022. Photograph: Bob Strong/Reuters

The economy and Biden's handling of it was among the major issues in the election, as numerous surveys had pointed out.

But its impact on voter behaviour was not as strong as was expected.

Nobel Laureate Paul Krugman, who is a Democratic partisan, went so far as to say that the economy under Biden had not done as badly as was made out.

As if on cue, the October inflation fell to 7.7 per cent, still high, but lower by a full percentage point than the September figure.

Job growth has continued to be robust.

The Dow Jones, S&P and Nasdaq indices all rose by between 3 and 7 per cent, lifting all boats in bourses across the globe, including in India.

Abortion, more specifically the Supreme Court rolling back the Roe v Wade decision earlier in the year, was another sensitive issue.

Women seem to have voted in larger numbers than before and even in traditional Red states, registered their protest through ballot boxes. 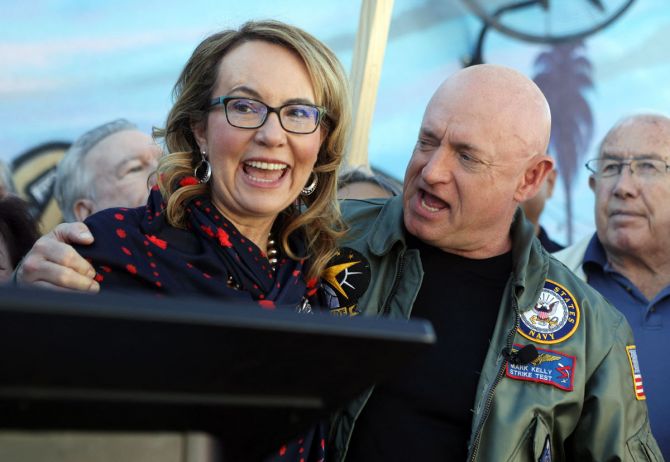 IMAGE: Senator and former astronaut Mark Kelly and his wife Gabby Giffords -- the former member of the United States House of Representatives who was shot in the head and seriously wounded in January 2011 -- declares victory in Phoenix, Arizona, November 12, 2022, bringing the Democrats closer to a majority in the US Senate. Photograph: Jim Urquhart/Reuters

The liberal establishment was quick to sing hosannahs to robust American democracy.

In The New York Times, Eric Nagourney headlined his column, 'In a Nation Divided, One Area of Agreement: Voting Matters'.

He went on to quote Alexander Hamilton, one of the founding fathers, that American elections provided 'a moral certainty that the office of President will seldom fall to the lot of any man who is not in an eminent degree endowed with the requisite qualifications.'

Krugman was also in a celebratory mood, but a bit more subdued.

He quoted Irving Kristol, perhaps the most consequential public intellectual (external link) of the latter half of the twentieth century, '[the people in our democracy] are not uncommonly wise, but their experience tends to make them uncommonly sensible.'

Why should non-Americans, especially Indians, be concerned about these happenings in the United States?

The most compelling reason is that even though we live now in a distinctly less globalised world as compared to the early years of this century, we still need to worry about what could be dangerous trends.

One of these is the insularity and xenophobia that are becoming ever more evident in country after country, not excluding India.

Leaders openly resort to jingoistic appeals in the guise of being staunch nationalists.

This is not confined to the putative Czar Putin or Emperor Xi. Trump could teach them a lesson or two.

It was not too long ago, fourteen years to be exact, when liberals in the world rejoiced in Barack Obama's victory.

This writer firmly believed then that that was a transformative moment and Obama would be the leader of this new age. 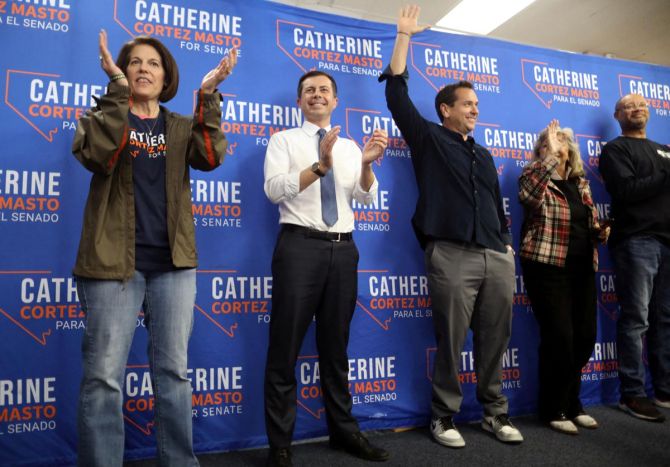 IMAGE: Democratic Senator Catherine Cortez Masto's victory in Nevada tipped the Democrats over the finish line in the US Senate.
Standing to Masto's left at the rally in Henderson, Nevada, November 7, 2022, is US Secretary of Transportation Pete Buttigieg, a likely front-runner for the Democratic presidential nomination if Biden decides not to run in 2024. Photograph: David Swanson/Reuters

That optimism has long gone. Significantly large numbers of Americans - mostly men, white, middle-aged and relatively less educated - never got used to the fact that a highly articulate, intelligent person of colour could occupy the highest position in their country and be considered the leader of the Free World.

That backlash became evident in the many legislative setbacks the Obama administration suffered.

It also sealed the fate of Hillary Clinton's candidacy in 2016.

Americans were not going to be led by a woman after being under an Obama presidency for eight years.

And so Donald Trump rose, like some malevolent Phantom casting his shadow over the great country. Except that he was all too real.

He swiftly captured the Republican party and recast it into his own mould.

His three supreme court appointments have tilted the balance irrevocably towards non-progressive values for a whole generation to come or longer.

The irony is that of the two former presidents, Obama is now a greying kindly apparition wielding rapidly dwindling persuasive influence. 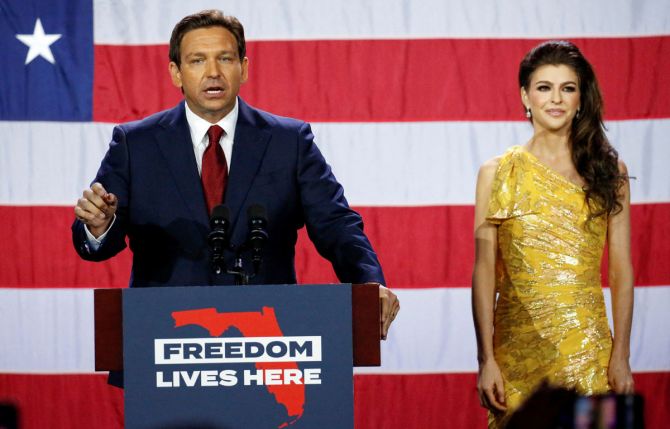 IMAGE: Republican Ron DeSantis, who was re-elected Florida's governor by over a million votes, speaks with his wife Casey DeSantis at his side at a victory rally in Tampa, November 8, 2022.
Trump, who now sees DeSantis as his biggest opponent for the Republican presidential nomination in 2024, has already attacked the governor, who is 32 years younger than the former president, served in the US military and has degrees from Harvard and Yale. Photograph: Marco Bello/Reuters

But Trump is almost Darth Vader personified, looming over the current horizon, with scores of his acolytes in positions of power.

His influence has been reined in for the moment, but he is about to announce his candidacy for president in 2024.

And it is not yet quite clear whether Florida Governor Ron DeSantis, the present hero of the disenchanted Republicans, or President Biden, who says he might seek re-election (but will decide in 2023), who will be then 82, can checkmate Trump.

That is reason enough to worry, despite the somewhat sunny days of early November 2022. 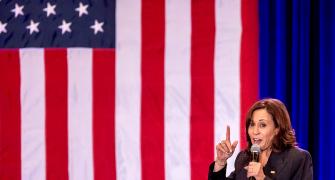 When Kamala Harris Kissed On Stage 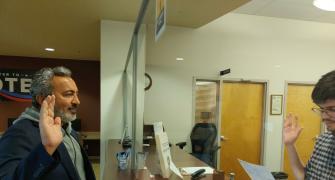 Ami Bera is 5th Indian American elected to US Congress 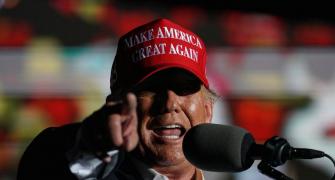 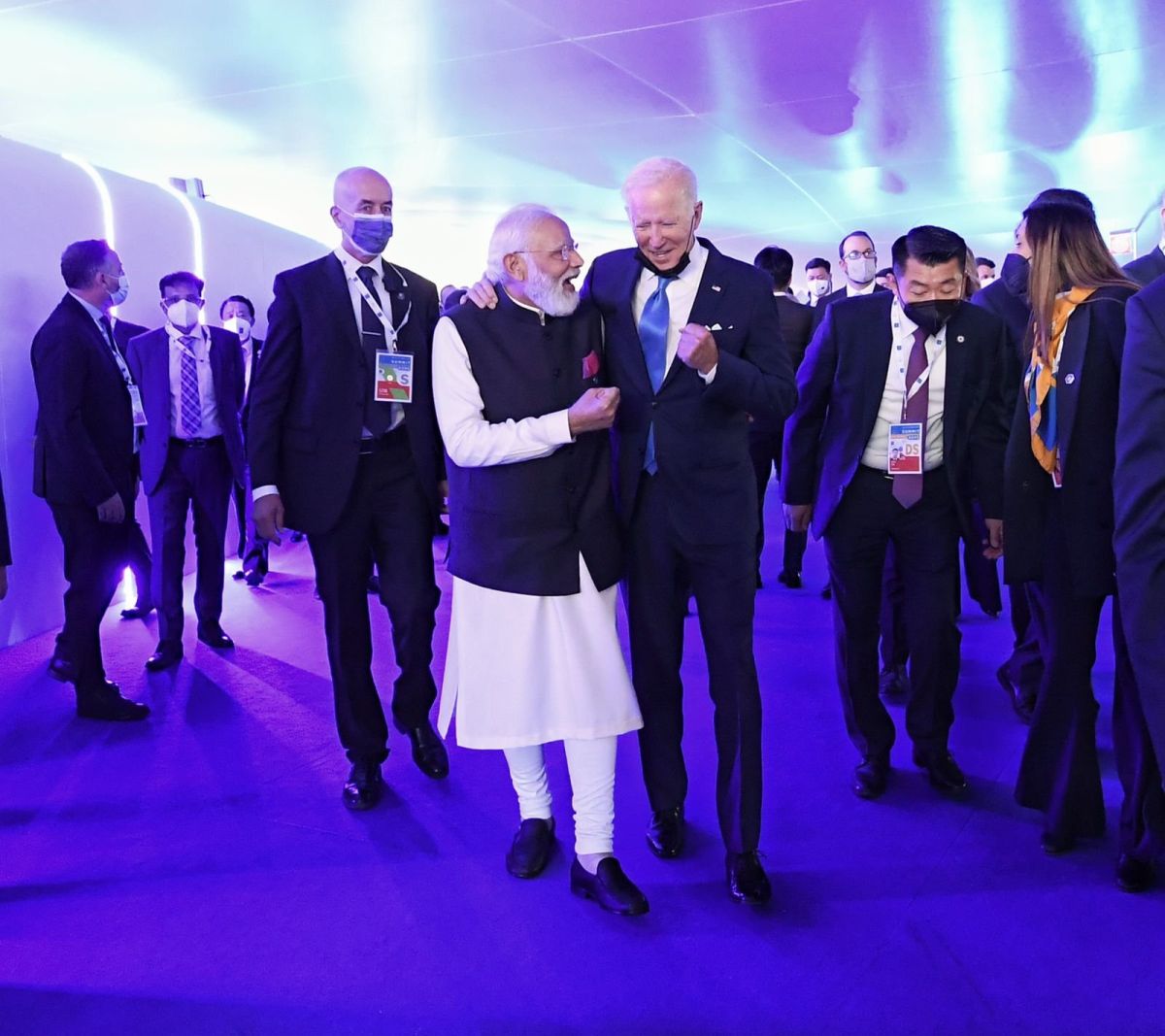 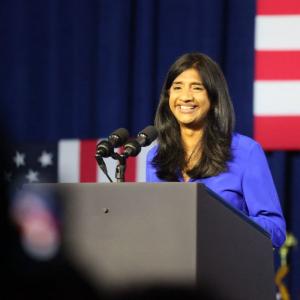