'While the meeting on December 6th was perfectly legal, was it ethical?' asks Colonel Anil A Athale (retd). 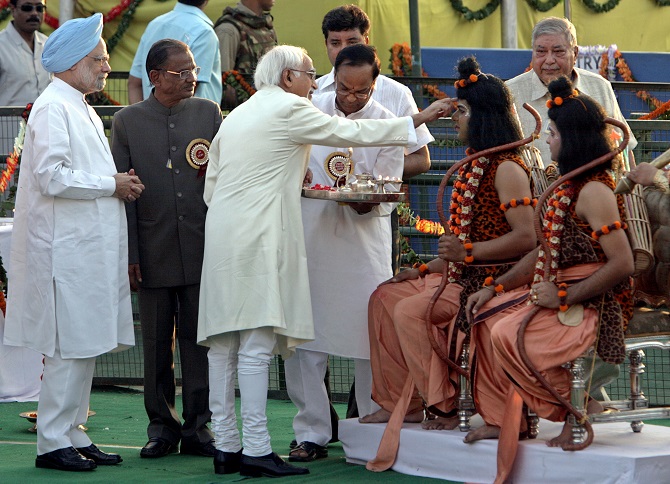 IMAGE: Then vice-president Hamid Ansari with artistes dressed as Rama and Laxman as then prime minister Dr Manmohan Singh, left, looks on during the Dussehra celebrations in New Delhi in 2009. Photograph: B Mathur/Reuters

Mani Shankar Aiyar's 'dinner diplomacy' on December 6 is in the eye of the storm after the prime minister made use of it to target the Congress party.

In normal times, the dinner would be dismissed as another of those Track II bashes. But the times are not normal. For the last six months or so, India has hardened its position on Kashmir and a major anti-insurgent operation is on in the Kashmir valley.

After PM Narendra D Modi's failure to reach out to then Pakistan prime minister Nawaz Sharif on December 25, 2015, India has launched an undeclared campaign to isolate Pakistan.

The situation is indeed fraught with uncertainty as there is a maverick in the White House in the US.

A few months ago, US President Donald J Trump signed into law a $700 billion defence bill that includes up to $700 million to reimburse Pakistan for supporting US military operations in Afghanistan.

An earlier version of the bill asked the US defence secretary to certify that Pakistan had taken steps to demonstrate its commitment to prevent the Haqqani network and Lashkar-e-Tayiba from using Pakistani territory as a safe haven and to raise funds or recruit terrorists.

But when the US house of representatives and the US senate released their joint version of the 2018 National Defence Authorisation Act, they deleted the Lashkar from the list and focused only on the Haqqani network.

This was the first indication that the United States could show leniency in Pakistan's disputes with India if Islamabad agreed to help the US out in Afghanistan.

In clear terms, the US is back to its game of selective approach to terrorism.

Against this backdrop, it is immaterial if the dignitaries attending Mr Aiyar's dinner discussed the Gujarat election or not. The very meeting was in defiance of the Government of India's current stand to have no talks with Pakistan till terrorism does not end.

As someone who has intermittently been part of Track II dialogues with Pakistan, China, the US and Russia over the last 25 years or so, I am very clear about certain rules that one has to follow.

First and the foremost is the rule that the government must be kept fully in the picture before and after the talks. It is common practice to make a detailed report once the interaction concludes.

In the current controversy, it is not very clear if such prior government approval was obtained by the participants.

It is also not clear if any post-meeting report was sent to the current government.

If neither of these actions is taken, then the government is fully within its rights to question the participants and their motives.

This kind of defiance of the government was shown by the then Congress vice-president during the Doklam standoff between India and China when Mr Rahul Gandhi met with the Chinese ambassador in Delhi.

Imagine the Democratic party's presidential candidate meeting the Iraqi envoy at the UN while the US (then under a Republican President) was on the verge of launching a war against Iraq. Let us not forget that at one point during the Doklam crisis, there was a real chance of an armed clash between India and China.

It is sad that the situation has come to such a pass when the gulf between the ruling and Opposition parties is so vast and there is complete lack of trust. Things were not always like this.

Since we have borrowed the concept of parliamentary democracy from Britain, it is useful to remember that the opposition in that country is always referred to as 'Her Majesty's Loyal Opposition.'

In India in the past, issues vital to national security were treated above party politics. During the 1962 war with China, all the political parties sunk their differences so much so that even the then separatist party like the Dravida Munnetra Kazhagam gave up its separatist demand.

In 1965 as well as 1971, the ruling and Opposition parties were on the same page. In 1971, Mr Atal Bihari Vajpayee, then the Leader of the Opposition, profusely praised then PM Indira Gandhi for the successful liberation of Bangladesh.

The break between the ruling and Opposition parties even on issues of national security began with Mrs Sonia Gandhi's ascendance. In 1998 when the Vajpayee government conducted nuclear tests and ushered India as an overt nuclear power, Mrs Gandhi's party opposed the government actions.

In 1999 when Pakistan occupied posts across the Line of Control in Kargil in Kashmir, instead of giving unequivocal support, the Congress questioned the Vajpayee government about how it allowed Pakistan to take such action.

There is a story in the Mahabharat where the Kauravas were made prisoners by the Yakshas. Putting their rivalry aside, Yudhishthir, the eldest Pandava, is said to have remarked that while we may fight amongst ourselves, when it comes to outsiders, we are not five but hundred and five! (Five Padavas plus one hundred Kauravas). It is worthwhile to remember this lesson from the Mahabharat.

While the meeting on December 6th was perfectly legal, was it ethical?