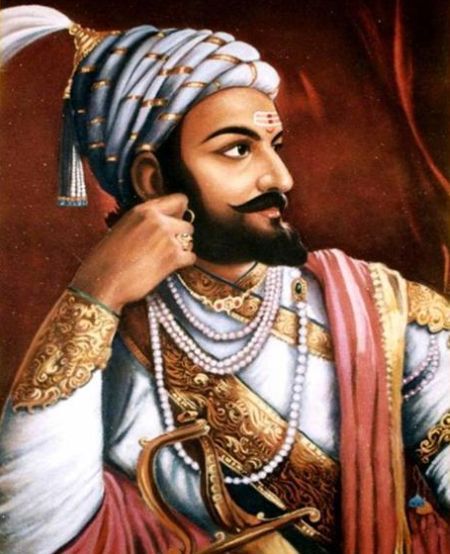 'Shivaji was among a handful of Indian rulers to realise the importance of sea power... Not much attention is paid to his remarkable achievement: Building a modern navy and the revival of Indian maritime power,' notes Colonel Anil A Athale (retd).

'Navy is an independent sphere of the State. He who has the navy rules the waves. -- Ramachandra Pant Amatya, Shivaji's prime minister.

February 19 is celebrated as Shiv Jayanti (the birth anniversary of Chhatrapati Shivaji). Somehow public attention and popular memory is disproportionately focused on his exploits against the Bijapur Sultanate or the Mughals. Not much attention is paid to his other very remarkable achievement: Building a modern navy and the revival of Indian maritime power.

Indians had extensive trade links to South East Asia and Indian culture spread far and wide through its traders. The Chola and Pallava kings of south India virtually ruled the seas to the east and south. India had extensive trade with the Middle East as well as Europe, especially during Roman times.

Dry docks and ship construction sites at Lothal in Gujarat that date back to one millennium BC indicate that Indians were fairly advanced in the art of ship building. The ports of Bharoch, Kalyan, Chaul and Sopore were well known all over the Middle East.

However, the Indian share in sea trade and ships declined from the 14th century onwards. This was primarily due to the invasion of western India by the Muslim sultans from the north.

As the Indians lost their land base, shipping declined and the resultant vacuum at sea was filled in by the Arabs. Soon, colonies of Arab traders sprang up in most of the important ports on the western coast.

Shivaji was among a handful of Indian rulers to realise the importance of sea power. He appointed Daulat Khan and Maynak Bhandari as the joint chiefs of his navy, building several sea forts to support this fledgling force.

He cited his main base at a place 150 kms south of Mumbai, safely away from the existing sea powers like the Portuguese, British and the Siddi.

The rock on which the Sindhudurg fort is situated was about two kms out at sea near Malwan. Work on the fort began on November 10, 1664 and was completed in 1667. Shivaji enrolled the local fisherfolk in his navy and gave them generous grants.

A total of 58 forts were made operational in the next few years. The forts at Vijaydurg and Kulaba near Alibag were the most prominent.

In February 1665, he decided to test the preparedness of his fledgling navy. With 88 ships, including three large ships, he embarked with 4,000 infantry and raided the seaport of Basrur. En route, his convoy passed close to the Portuguese possessions at Goa which wisely kept away from the powerful Maratha fleet.

Shivaji was also one of the few contemporary Indian rulers who understood the British designs on India.

'The English are no ordinary traders and money lenders, behind them stand the power of a mighty State. They are also so clever that they will steal from right under your nose without you knowing it. Be very cautious while dealing with them,' he wrote to one of his principal officers.

The origin of the first Anglo-Maratha clash was the shelter the English provided the Siddi of Janjira in Bombay. The Siddi was nominally under the Bijapur Sultan, but faced with the Maratha threat he sought the help of the Mughal governor at Surat.

The British, with commercial interests in Surat, were inclined to keep the Mughals in good humour. The Siddi took full advantage of this situation and launched a number of raids on Maratha territory using his strength at sea.

When faced with the Maratha naval threat his ships took shelter in Mumbai harbour that had by now become the main English base on the western coast. Shivaji realised that the only way he could check the foreign powers and the Siddi was by establishing strong forts to blockade Mumbai.

In April 1672, Shivaji planned to occupy the small island of Khanderi, south of Mumbai. The island commands the approaches to Mumbai harbour and by occupying it Shivaji thought of checking the English. After careful preparations work on building of the fort started in September of the same year.

Daulat Khan and Mainayak Bhandari, Shivaji's principal naval officers, were in charge of the work. The English claimed that the island was part of the Mumbai group of islands and belonged to them. The Siddi and the English threatened to launch a joint operation against the Marathas.

Shivaji at the time was involved in an expedition to the south and the Marathas did not press the issue.

Seven years later, when Shivaji found time to pay attention to this area, work on fortifying the island was resumed on September 2, 1679. The Portuguese, who at that time controlled the island of Sashti (Thane) as well as the fort of Bassein, remained neutral and were secretly quite happy at the turn of events.

To bring effective pressure on the English, Shivaji decided to menace the Mumbai harbour itself with a land threat. He assembled a 4,000 strong force in the vicinity of Kalyan to attack Mumbai.

But he needed permission from the Portuguese for passage through Sashti which the Portuguese refused. However with the memories of Shivaji's devastating attack on Surat fresh in their minds, there was panic in Mumbai.

The Maratha navy landed a force of 500 men on Khanderi to start work on the fortifications. Two hundred of this force were workmen while the rest were soldiers.

The English decided to starve the garrison into submission by launching a blockade of the island. Four large ships were sent from Mumbai for this task. The Marathas, under cover of night, managed to send provisions to the garrison in small ships.

On September 19, the English attempted to land on the island, but the alert defenders foiled the attempt. Later in October, more English ships joined the blockade and it started having some effect.

On September 22 a major naval engagement took place in which the smaller Maratha navy suffered heavy losses. Three large ships of the Marathas were sunk and nearly 300 Maratha sailors died in the fighting. The blockade continued for more than three months.

In December 1779, the English sent a message to the garrison asking them to surrender. Shivaji had given strict instructions to his men to fight to the last. In January 1680, Shivaji took action against the English factory at Rajapur and imprisoned the Englishmen there. This forced the English to open negotiations on January 8, 1680.

The negotiations resulted in a treaty between the Marathas and the English and on January 30 the blockade of Khanderi was withdrawn.

The Maratha base at Khanderi was to be a source of constant trouble to the British in future. It was a great defensive victory for the Marathas.

Shivaji died within less than two months after this clash. It is significant that the last major battle of his was a naval engagement against the English. Had he lived he would have given greater weight to the building of the navy and concentrated on the coastal areas.

The Marathas had begun trade with Muscat. The main trading commodity was salt. Shivaji also attempted to establish a monopoly in the betel nut trade. He was obviously eyeing the lucrative trade in spices.

Already, after his expedition to the south, he dominated most of the western coast. His death gave a totally different direction to Indian history since it was a signal for the ambitious Mughal Emperor Aurangzeb to come south to finish off the Marathas. A conquest that had eluded all the earlier Mughal emperors.

In the life and death struggle against the Mughal empire, the Marathas had no time to spare for the threat posed by the English. For the next 70 years there was relative peace between the English and the Marathas.

The English failed to take much advantage of the weak position of the Marathas as a very able seaman, Kanhoji Angrey, had taken charge of the Maratha navy by then and he soon built up his strength to such an extent that the English reluctantly paid him taxes and his 'pass' was needed for a safe passage in the western sea.

As the country and Maharashtra plan to build a memorial to Chhatrapati Shivaji in the Arabian Sea adjacent to Mumbai, it would be indeed appropriate to make it a memorial to the Maratha navy and help boost our naval tradition.

We owe it to Shivaji who revived the navy on the western coast. 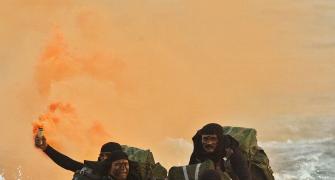 'Navy chief's resignation will dent morale of young officers'
'When we move in, we kill' 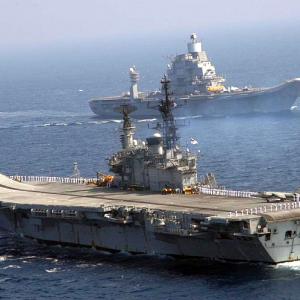 When India flexed its naval muscle