News
Business
Movies
Sports
Cricket
Get Ahead
Money Tips
Shopping
Sign in  |  Create a Rediffmail account
Rediff.com  » News » What is working for Modi if not the economy? In his 1992 presidential campaign, Bill Clinton immortalised the line, 'It's the economy, stupid'. Does this work in Narendra Modi's India?

In election after election, across democracies in the world, the line has been repeated.

The transnational appeal of the idea was also understandable because James Carville, the famous political 'consultant' who coined it for Clinton, also advised dozens of leaders across the world.

A kind of globalised, American Prashant Kishor. And, whatever the language or idiom, the logic passed the test of time.

Or until lately. For almost a quarter century, a leader who promised or delivered a better economy won, or was re-elected.

In 2016, this was the promise that brought Donald Trump to power, as also Modi in 2014. It seems to have changed worldwide now. Let's look at India.

After Modi's first two years, the economy has stalled, and then declined.

The stall began with demonetisation in 2016-2017. Lately, India has had at least 7 out of 8 consecutive quarters of growth decline.

Negative growth is rightly blamed on the pandemic, but it isn't as if this patient was in the pink of health before the virus struck.

On almost every economic and even social indicator, India has been posting a decline.

It shows in our crashing rankings on all key global indices.

Now, we know that Modi won power in 2014 on the promise of massive economic growth, jobs and development on the 'Gujarat Model'.

But barring, say the first 24 months to some extent, he has never delivered on that promise.

If the concept of 'It's the economy, stupid' worked, he should not have swept the Uttar Pradesh elections of 2017.

By that time, demonetisation had already deflated India's economy, job losses, trade, rural and farmer distress had set in.

It didn't bother anybody but his hapless opposition and marginalised editorialists like us.

By the summer of 2019, our economy had already been in a tailspin.

Worse, joblessness was already reaching a high that would be alarming in a democracy.

Some of the data was so embarrassing that the Modi government had to either hide it, rewrite it, or change the formula and produce friendlier data as on GDP numbers.

Every economic indicator had gone wrong except one: Inflation.

And yet Modi returned with a larger majority in that election.

It is still a few days before we will know what the voters decide in these five assembly elections.

The numbers obviously won't be what Amit Shah is counting after each phase in West Bengal.

But, whatever these are, one thing they won't reflect is the state of India's economy.

It will be the first year of negative -- double digit negative -- growth in our independent history.

And while this may be blamed on the pandemic, it destroyed so many lives, jobs and savings because it came on top of three lousy years.

In normal politics, this would have made this election a walkover for the Opposition.

It will be anything but that. Which will make us question that 1992 Clintonism.

So, what is it that works for Modi if not the economy? Or, how does he keep winning in spite of the economy? The fact is, it isn't an India-specific phenomenon.

Donald Trump, whatever else was wrong with him, lost in spite of the economy being in a pretty good place.

It helped him retain and increase his voters. But other considerations weighed on the minds of a larger number of voters.

The issues of identity, colour and class, the virus for example. Biden's promise wasn't an economic boom.

At the other extreme is the Putin phenomenon. In fact, this week's National Interest was sparked by a Ruchir Sharma column in the Financial Times where he talks about how Putin has not only made Russia sanctions-proof, but continues to keep winning despite insignificant economic growth.

We record all the qualifications on Russia's electoral process -- ours still is much cleaner in spite of some vote-filled EVMs hitching a ride in a candidate's car in Assam.

Yet, there is no denying that he's widely popular and will win a fairer election as well. How is he able to do this without growth?

Putin is riding the deep insecurities of a people scarred by much instability, political and economic, preceding his rise.

For them, therefore, stability becomes the first priority. The economy can wait.

If we were to build on this, stability brings nationalistic self-esteem.

Putin fought off many separatist or religiously inspired forces, insurgency and terrorism, 'taught the upstart Ukrainians a lesson' by grabbing Crimea, stood up to America, probably even played it in the Trump period.

Under him, Russia is back to being a power that enough of the world still holds in awe.

How does it matter that its economy has shrunk relative to the rest? Even compared to the emerging markets.

But, if the nation is together, can punch above its economic weight in its neighbourhood and in the global balance of power, it is because of stability and leadership.

The economy is about my self-interest. I can sacrifice it for some time.

Apply the same parallel to India. By 2014, India still had the scars of 2008 (26/11) and much terrorism that preceded and followed it, going right back to the early Vajpayee years.

It was like two decades of humiliation with a much weaker neighbour hurting us often, at will.

All India would do, from Vajpayee to Manmohan Singh, was to go complaining to America and the rest.

On top of it, we had a prime minister so weakened by his own party that he had been reduced to a caricature of that high office.

Plus, the discourse across the board was all about corruption from the opposition, and inequality even by the ruling party.

Between 2003 and 2009, India had built enormous pride and optimism with a booming economy.

That optimism brought the UPA back to power. In the following years, it was fully reversed.

It was an incredible election where the ruling party also campaigned complaining about inequality and poverty instead of its economic successes.

For the Modi proposition, if the promise of taking the Gujarat Model nationwide was the engine, this widespread negativity provided a 200-knot tailwind.

Through these seven years, he's mostly failed to deliver on the first.

But, on the second, national pride, standing up to terrorism from the neighbourhood, on restoring the majesty of the prime minister's office, he scores 10 upon 10.

May be even 11 upon 10. Remember, we are only talking about his voters.

The belated flurry of economic reform would suggest Modi has figured that his script is getting jaded and that he needs a new one.

He will try for an economic recovery but still stick to what has worked for him so far: The three-pronged offering of massive, efficient welfarism for the poorest, hard, visible infrastructure-building and harder, cast-in-Hindutva nationalism.

The engines of the economy, left to idle for long, take time gathering pace.

It is likely that India will get a great year anyway on the back of a terrible one.

Some equivalent of the stock markets' dead cat bounce will come in.

Usually, it's some successor who will benefit from this. So can't count on it.

Modi gets it. The question is, do his challengers get it.

Much of their attack is still over economic distress under Modi.

Check out the Congress and Left parties' flip-flop on Sabarimala to understand the point on identity.

Or the manner of questioning over Uri, Balakot and Galwan. These underline their faltering on nationalism.

Economic distress brings insecurity, but it isn't a fraction of the visceral emotion a perceived threat to identity or national pride brings.

This is why demagogues across the democratic world keep winning.

The reason we'd prefer to say at this point: it isn't the economy, genius. 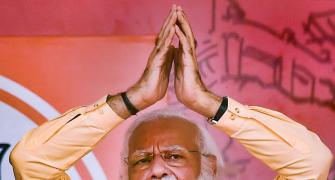