Triumphalism, premature declaration of victory meant no one checked if India had enough vaccines, oxygen, remdesivir, bringing us back to a crisis where we need foreign aid after four decades, observes Shekhar Gupta. 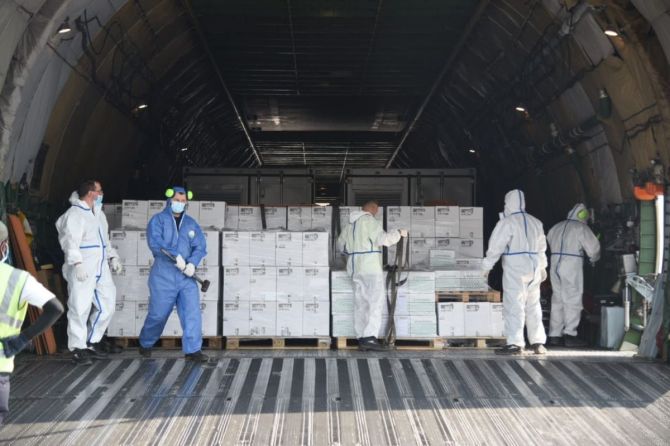 It is to be welcomed that the government is open to foreign aid in such a colossal national emergency, and is also seeking it.

The European Union and UK have both said they are responding to requests from India.

The UK's assistance is coming from its Foreign, Commonwealth & Development Office and the US's from USAID.

The Modi government's ministers are hailing these as shining examples of shared values, friendship and so on.

We learnt this growing up in our humble small-town homes that when your kitchen runs out of sugar, you are not ashamed of borrowing a cup-full from the neighbour.

Our situation is a little bit worse than a household running out of sugar. When both Imran Khan and Xi Jinping rise generously to offer assistance, you know you are in a bind.

If you read between their lines, one is telling us we aren't such a big power compared to it that we pretended to be.

The other, patronisingly, is showing us our place in the region.

Especially as, at the same time, it also calls a meeting of the subcontinent's foreign ministers to discuss mutual cooperation. Subtext is Covid assistance.

The message to our immediate neighbourhood, which India protectively seeks as its own zone of influence, is that we know how you all need help with your Covid counter-measures. Don't count on India.

At this point it is India that needs help from the world.

See how India is unable to even ship vaccine doses and pharmaceuticals you ordered earlier.

Of course, it was said that the meeting was open to India's foreign minister too.

That was just some unsubtle turning of the knife.

That's the reason we say, no harm seeking assistance from your friends and saying grateful thanks when your adversaries are sneering. 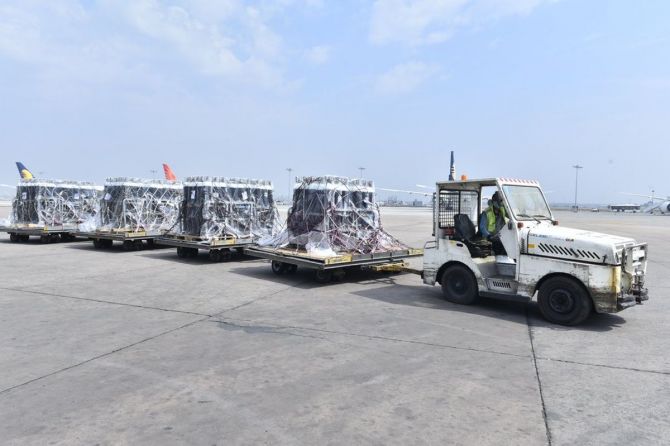 What are we then arguing about? Here is a proposition.

While offering help to another country in need requires a big heart, it equally needs one to seek it.

That level of humility cannot come from a small heart and a closed mind.

Because then you'd be a North Korean, Cuban or the current Venezuelan regime.

And yet, if we can have such a large heart and an open mind when in a murderous quagmire, would it have hurt if we had displayed some of it earlier? Particularly when we were declaring victory over the virus and declaring ourselves the 'Vaccine Guru'.

The prime minister told the world that India was its pharmacy when less than 1.5 per cent of our population was vaccinated.

I would welcome letting Serum Institute of India, our largest vaccine manufacturer, fulfil its contracted foreign orders, or even our government gifting some to friendly nations and talk about 'Vaccine Maitri'.

Large nations should do those things. But only if those large nations also look within and ensure they'd not be out in the world market looking for the same thing they gifted away.

Do you give away a katori of sugar to your neighbour if that is all you have left?

Once again, this isn't a lament as much about the fact that we sent away a little over 60 million doses which would have come handy now when our vaccination centres are logging desultory, pedestrian daily numbers.

Another 60 million, for a population like ours, would have cushioned us for a couple more weeks if a real vaccination drive, of the kind India needs right now, begins.

But, the fact that we kept sending these away while not placing orders with our two brilliant domestic companies to scale up production and keep stockpiling for domestic needs, underlines terrible over-confidence. 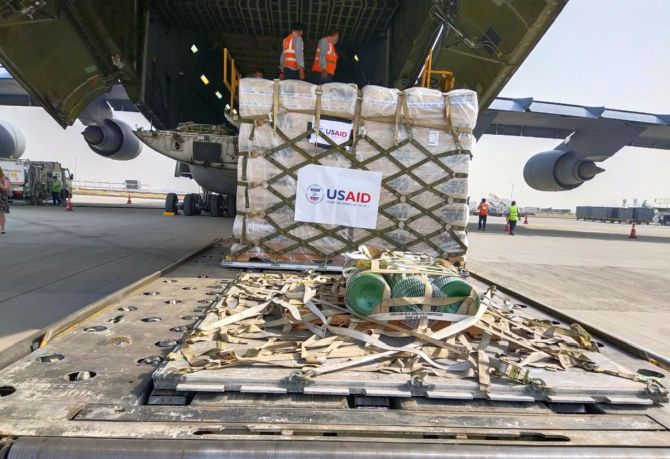 IMAGE: The United States delivered to India its first consignment of emergency medical supplies including hundreds of much-needed oxygen cylinders and regulators to help the country fight the coronavirus pandemic. Photograph: @MEA/Twitter

We know that placing these orders in advance would need faster price negotiations, maybe that margin price of Rs 150 or about $2 when the UN was apparently paying $3 was seen to be a big political win.

Also, an order of the necessary volumes would have required payment of sizeable advances and run the risk of audit trouble later.

Those are things bureaucracies worry about. Not a leader who came to power on the promise of cutting through these.

What we have right now is a self-created perfect storm.

We have this algebraically confusing differential pricing where the Centre pays one price and the states another.

I'd have no argument with what price the private sector charges or pays as long as enough doses are available with the government.

Second, there is the age-group based policy and pricing confusion and distinction.

Third, the Centre has to finally had to pay the sizeable advances the two manufacturers had asked for much earlier.

If only this decision was taken in time.

And finally, after all this, there aren't enough doses.

While the programme gets opened out to all adult age groups this May Day, most states won't have enough to provide their share for the doses. 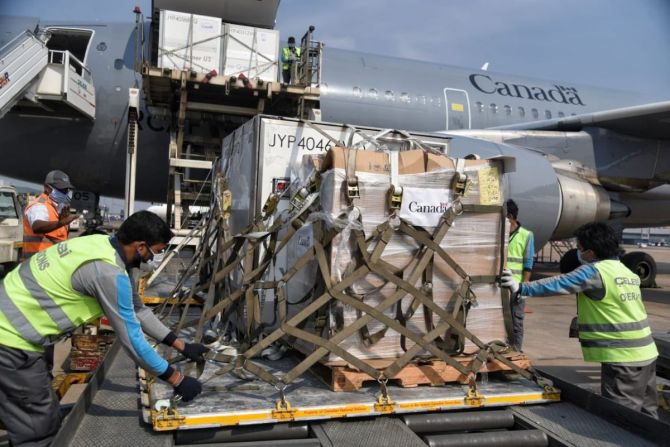 IMAGE: A shipment of 50 ventilators and 25,000 vials of Remdesivir arrive from Canada. Photograph: @MEA/Twitter

How perfectly does it echo the familiar old story of the man in a village caught stealing onions.

He was held guilty by the panchayat and given a choice of eating a hundred onions or shoe-beatings.

He chose the onions first, gave up after ten, the shoe-beatings next, quit after 10, went back to onions, and so on until he ended up having both.

Trickle-down economics never worked, President Joe Biden said in his address to the joint session of Congress earlier this week.

He also tweeted that economics would now grow bottom up and middle out.

There will be many sharp, and smart voices countering it, with equally sound intellectual arguments.

It's an eternal debate in political economies.

But one area where the trickle-down effect can't be contested is leadership.

Leadership trickles top down. And the more successful the leader, stronger this downpour.

Triumphalism, premature declaration of victory goes straight into the heads of the teams also.

That's why nobody checks if you have enough vaccines, oxygen, remdesivir, even paracetamol in store or not.

Because there isn't one major country in the world where the virus hasn't returned with a second wave.

Everybody celebrates victory, and refuses to see the signs of trouble as they emerge. 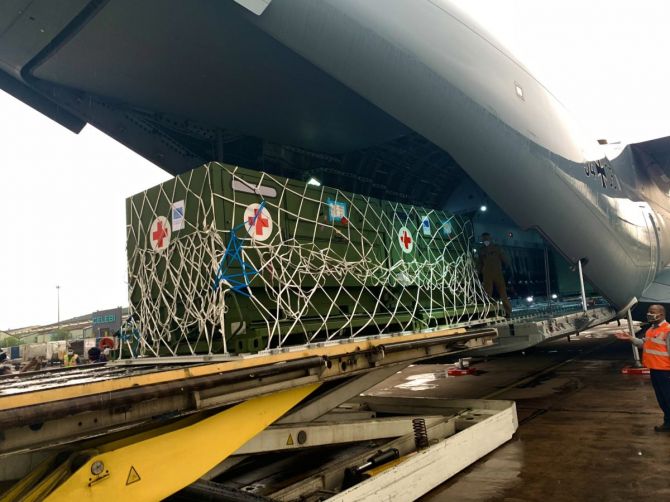 Delhi's test positivity rates didn't go from a 'goodbye Covid' 0.23 per cent to 32 per cent overnight.

This kept growing over four weeks until it exploded.

Nobody woke up. The top leadership was busy winning elections and dissing federal counterparts just when India needed unity and consolidation. The headiness trickled down.

Not even the explosion in Kerala and Maharashtra woke anybody up.

It was seen as a problem of two distant states. If we were hoping that our state boundaries will protect us from a virus that treats the oceans with contempt, we were setting ourselves up for slaughter.

And, bringing India back to a crisis where it needs foreign aid after four decades.

Of course, that still doesn't mean our triumphalism has subsided yet.

If it were so, we won't embarrass ourselves again by using our top diplomats to complain about foreign media coverage of the gravity of this crisis, what brought us here, while we seek and accept help in the same crisis, from the same countries. 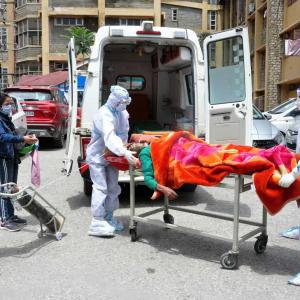