If the challenge of the government is to regain the confidence of the minorities, it has to first overpower its own unruly gangs and their masters, says Sunil Varghese. 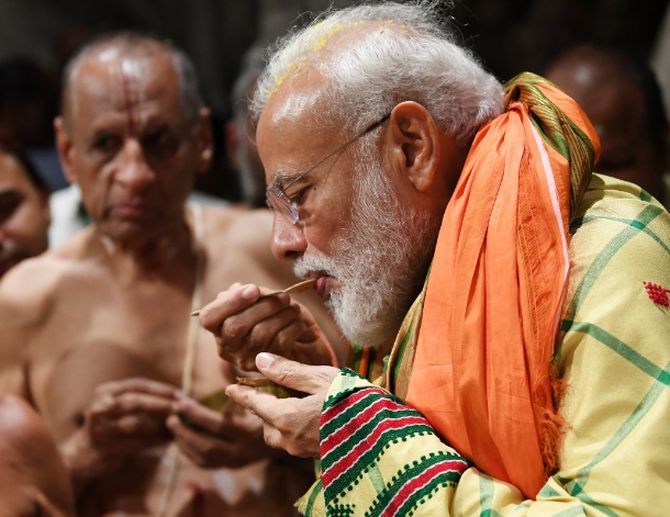 With the addition of 'Sabka Vishwas' more emphatically, he has underscored the need for 'genuine' representation of all sections of society, including minorities, in the conduct of government business.

Now that the politics of nipping the Opposition downright to their molecular space has been mastered by Modi, the time is ripe for even making uninvited interventions to the hitherto alienated minority wards, to help conquer and annex the last bastion of democracy also to his fold.

That would pitch for a voluminous and pervasive positivity, vaulting the economic, social and cultural levers of the country, at a time when it is poised for leapfrogging to the next growth trajectory in the world economy.

Attacking religious sentiments has been proved imperative for winning elections in most states, which has become the most poisonous thought induced in many die-hard party workers in recent times, largely orchestrated by their local leadership.

Noteworthy is the fact that there are states immune to such malign bulldozing and appeasements -- which have mustered the courage to put up a contrasting result in elections compared to that of the decision of the majority.

And that is the basis for the new bonhomie propelled by Modi to the minorities and to those distanced from his party who are ostracised by the suppressive anarchy unleashed by his tail-end flag-bearers.

However, there is certainly disbelief in the public, especially among the minorities, as to how far the spirit of this motto is going to be translated in the new scheme of things. There are a couple of indefensible reasons for this state of disbelief.

Conspicuous by absence was any pronounced package, other than the mundane budgetary allocation, for upliftment of the minorities in the first five years of the Modi reign.

The other being the unabashed violence perpetrated on them by the folks of the fringe elements of the ruling party, obsessed with self-professed cultural chastisements and moderating religious freedom for others in rural safe havens.

So if the challenge of the government is to regain the confidence of the minorities, it has to first overpower its own unruly gangs and their masters.

A key legislation still under government consideration and actively being pushed to the Opposition front for their nod in the Upper House is to prohibit the instant talaq system. The bill is purported to protect the rights of Muslim women but it seemingly overlooks the sentiments of the community at large.

Attributing the reason for such an overture to the protection of Muslim women seems disingenuous due to the shortage of other government welfare schemes, well-intended to bring them out from long obscurity.

Manoeuvring for the passage of the bill tactfully without adequate safeguards and not heeding the voice of the masters of almost one-fifth of the population would only leave scars and even cracks on the façade of trust which Modi tries to put on with the solemn slogan of 'Sabka Vishwas'.

The meagre budget outlay (2018-2019) of Rs 4,700 crores (Rs 47 billion) for the development of minorities, even though it looks substantial in absolute numbers -- that too, after considerably increasing the allocation compared to previous two years -- would pave no way for them to be better-off sooner, considering the vast and dilapidated districts of minority concentration.

While more than 50% of this outlay is spent for education, the real outcome is appallingly low -- the dropout rates are still 35% to 40%, especially more among girl children of minorities.

Lack of toilets, classrooms and schools at a reasonable distance and abject poverty of parents are the major reasons for dropouts, according to a report by the National Productivity Council. Only 5.5 lakh youths have been provided with some kind of employment opportunity in the last year.

A serious introspection would point towards the need for comprehensive development agenda for minorities with allocation for poverty alleviation, housing, healthcare and sanitation, livelihood and skill development to help improve the performance metrics of all social indicators.

The policy of reservation for minorities in jobs and education needs to be pedalled mildly and should be primed towards a gradual halt within a reasonable time-frame.

Instead, the pillars of empowerment, by way of establishing all-encompassing villages with smart schools along with aligning madrasas with mainstream education, fortified hospitals, well-maintained roads, job-guzzling industrial parks et al, should take the centre-stage of policy-making for the benign development of minorities.

With an enhanced allocation of at least four times the current year's outlay, the seed for visible and sizeable green shoots of development or empowerment could be sown, thus aligning them to the mainstream landscape of India.

The announcement by the new government for providing annual scholarships to 50 million students from minority communities in the next five years, including 50% for girls, and plans for modernisation of madrasas is a welcome step in this regard.

No matter what the attitude of his party echelons, Modi is on the right path towards consolidating the energy of the nation to enable the successful launch of programmes of his government in the second stint.

Much of its success demands an unwavering will to stay on course without getting meddled or 'corrected' whatsoever by the fringes of his party.

Sunil Varghese is a regional business head at an IT company.