News
Business
Movies
Sports
Cricket
Get Ahead
Money Tips
Shopping
Sign in  |  Create a Rediffmail account
Rediff.com  » News » Post-Dadri, is darkness upon us? 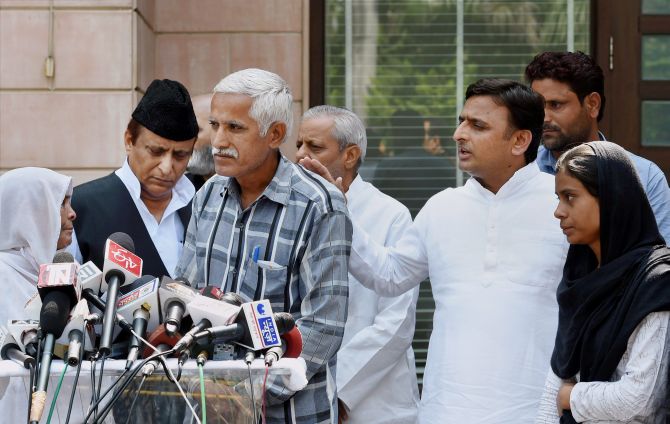 'Today, the target of this rage are the weaker sections of society -- Muslims, Dalits, liberal thinkers/writers who challenge its ideology. But tomorrow, it could be anyone stepping out of a pub; reading a book or watching a movie by an artist considered an anti-Hindu/anti-national,' says Durba Dhyani.

What exactly was it that transformed peaceful neighbours into a ferocious, blood-thirsty mob within minutes?

Try as we might, it is difficult to fathom just how a rumour of cow slaughter could have turned an otherwise peaceable people into killers.

Is it really all about the cow? Or is that animal symbolic of a deeper malaise that has gripped the country?

Was there something else, already simmering beneath the surface of just another ordinary Indian village? Yes, it was politically orchestrated and the venom of religious hatred had been injected. But what was it that provided the breeding ground for a communally charged atmosphere?

Mohammed Akhlaq, a village blacksmith, was doing well for himself. He had managed to educate and send a son to the Indian Air Force, no mean achievement. Perhaps the village should have been proud that one of its sons had 'made it,' so to say. But joy at another's success does not come easy when you have nothing yourself. Rather, a sense of injustice begins to creep in, for having been denied the same.

A few months back, two Dalit boys made news by cracking the IIT examinations, ranking among the top 500. Instead of bouquets, they received brickbats back home. Literally. Their home was pelted with stones by their neighbours, requiring police intervention. Was that deep-rooted casteism, or again, something else that reared its ugly head?

Maybe the same thing that devoured the New Delhi gang-rape victim? Let us remember that she came from the same socio-economic background as her rapists. But she dared to wear jeans, to watch an English movie, to study, to dream of becoming a physiotherapist. Worst of all she dared to look into the eyes of her attackers and answer back, when they wanted to know what was she doing, roaming around with a boy at night? You don't insert rods into people and pull out their intestines out of lust. That sort of demonic rage can only come from a deep loathing of yourself and your failings.

In a broader sense, it is the entire nation's failure -- to provide jobs to our youth, to secure the livelihood of our farmers, to reduce the socio-economic schism that is wider than ever today.

While a few are set to conquer Silicon Valley, a majority are languishing with no opportunities. While some can afford to blow up money at discotheques, most wonder where the next meal will come from. While some whizz past in flashy cars with trendy girlfriends, others remain sexually repressed and frustrated.

Hunger, of any sort, can lead to blinding rage. The kind of rage that the Hardik Patels of this country can intensify and exploit; a rage into which politicians can inject the poison of communalism, creating a lethal concoction that can be used to manufacture riots and win elections.

A rage that, if not deflected and provided an outlet for, will turn upon the elected leaders. Rather than dwelling on our failings, it is easier to deny them or find someone convenient to blame. We do the former by focusing on either the future (dream of a military, economic superpower, a Digital India) -- or the past -- (hark back to the imagined glory days, of Hindutva).

In a very Bollywood like manner, we twist reality to fit our dreams. It is when this image is disturbed by present reality -- the spectre of farmer suicides, unemployment, power cuts, water shortages, the stench of open defecation -- that we become angry and look for a Mohammad Akhlaq to beat up.

Today, the target of this rage are the weaker sections of society -- the minority Muslims, the Dalits, the liberal thinkers/writers who challenge its ideology. But tomorrow, it could be anyone stepping out of a pub; reading a book or watching a movie by an artist considered an anti-Hindu/anti-national; enjoying a meal of parota and chilly beef, holding their partners' hand while walking down the street.

Anything that does not conform to the 'pure' Brahminical conception of how society should be, will come under attack. Jealousy, anger, fear and all forms of darkness often find a convenient garb --that of religious righteousness.

It is the same darkness that gave birth to Islamic State and the Taliban. Could this darkness devour India too?

IMAGE: The family members of Mohammad Akhlaq, who was lynched in Dadri, with Uttar Pradesh Chief Minister Akhilesh Yadav in Lucknow. Photograph: PTI 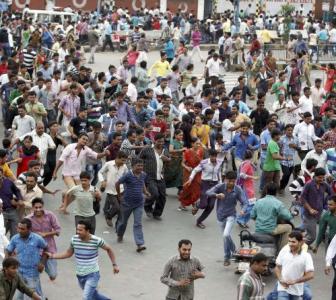 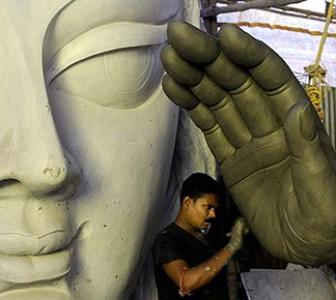