To visit Lahore in November, even in fulfilment of a religious obligation, could be seen as an act of disrespect to the memories of the over 160 innocent civilians and members of the security forces killed by the LeT and an act of insensitivity to the feelings of grief of the relatives and their outrage over Pakistan's failure to act against the Pakistan-based conspirators of the terrorist attack, notes B Raman.

While advocating a strong counter-terrorism strategy towards Pakistan, including the selective use of covert action against the Lashkar-e-Tayiba and other terrorist organisations operating against India from Pakistani territory, I have been suggesting for over a year now greater contacts between the policy-makers of the two countries so that they know each other in flesh and blood instead of assessing each other on the basis of media and intelligence reports.

Among the suggestions I have been making in this regard is a no frills, no-emotions visit by Prime Minister Manmohan Singh to Pakistan in response to the visit to India by former Prime Minister Yousef Raza Gilani last year and President Asif Ali Zardari earlier this year.

I have also been suggesting an exchange of visits by the chiefs of the army and the intelligence agencies of the two countries. My hope is that such personal interactions at the political, military and intelligence levels could lead to a gradual change of the present strategic mindset in the policy-making circles in Pakistan, which is based on feelings of insecurity arising from the war of 1971, suspicions and hostility.

Without a change of mindset, the various bilateral problems will continue to defy a mutually satisfactory solution.

I have even been saying that a visit by our prime minister should be without expectations of a breakthrough and without any pre-conditions. In this context, I welcome the invitation reportedly extended by President Asif Ali Zardari to Prime Minister Manmohan Singh to visit his native village in Pakistani Punjab and worship at the Sikh holy shrines in Lahore and nearby areas.

The visit could also be availed of for renewing contacts with the political leaders of Pakistan, who are engaged in a confrontation with their supreme court over the question of the supremacy of the parliament elected by the people in a democracy.

People's sovereignty is sacred for the survival of democracy. Till recently, the concept of people's sovereignty was being challenged only by the religious fundamentalists who argue that in an Islamic State Allah and not the people is sovereign and it should be ruled according to the will of Allah as interpreted by the clergy. That is why they are against liberal democracy.

Now, the application and operation of this concept is sought to be restricted and distorted by the supreme court headed by Chief Justice Iftikhar Muhammad Chaudhury in the name of the supremacy of the Constitution as interpreted by the judiciary.

In their own different ways, the religious fundamentalists and the supreme court have been conducting themselves in a manner which wittingly or unwittingly seeks to dilute the sovereignty of the people and their will as expressed during the elections.

While it is not for India to interfere in the internal affairs of Pakistan, it is important that we do not fight shy of political gestures which would lend strength to the votaries of liberal democracy based on the sovereignty of the people in Pakistan. A goodwill visit by our Prime Minister will be one such gesture.

While welcoming Zardari's invitation, I am at the same time disturbed by his suggestion, apparently made in good faith, that the prime minister visit the Sikh holy shrines in and around Lahore in November coinciding with the birth anniversary of Guru Nanakdev.

A visit to the Sikh holy shrines, especially to the Nankana Sahib, in November is the dream and desire of every Sikh. I could, therefore, understand the attraction which such a proposal could have for Manmohan Singh.

Unfortunately, November coincides with the anniversary of the 26/11 terrorist strikes in Mumbai organised by the LeT whose headquarters are based at Muridke, near Lahore.

To visit Lahore in November, even in fulfilment of a religious obligation, could be seen as an act of disrespect to the memories of the over 160 innocent civilians and members of the security forces killed by the LeT and an act of insensitivity to the feelings of grief of the relatives and their outrage over Pakistan's failure to act against the Pakistan-based conspirators of the terrorist attack.

Instead of creating goodwill between the people of the two countries, such an unwise and insensitive visit in November will shock large sections of Indian public opinion and add to the rigidity of the mindset towards Pakistan in India. A visit in November could prove counter-productive.

I would, therefore, strongly urge the prime minister to plan his visit either in October or December. If he decides to go, he has to go this year. From January, the Pakistani leaders will get busy with the next general elections to their national assembly due next year.

It is hoped that the prime minister and his advisers will realise the likely negative implications of a November visit and decide on a visit in October or December. He could still visit the Sikh holy shrines though it can't coincide with the birth anniversary of Guru Nanakdev. 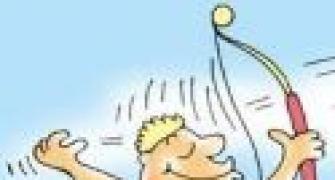 Live chat: Share your love problems with the Love Guru!
US never listens to us, complains Pakistan