The government needs to get the tribals in the Maoist-dominated areas on their side, if they are going to win the battle against the Maoists. But that is easier said than done, says Bibhu Prasad Routray.

When an area domination exercise by the security forces ends up in the killing of the same forces, it is not difficult to conclude as to who controls the area. The dominance of the extremists appears even more pronounced when three such exercises go awry in less than three days, leaving 18 security personnel dead.

In the military battle between the left-wing extremist Communist Party of India-Maoist and the Indian State, the extremists continue to retain the stranglehold. Union Home Minister P Chidambaram referred to a 'stalemate' between the Maoists and the Indian State, while summing up the Maoist situation in 2010. In reality, however, the stalemate is clearly swerved to the advantage of the extremists.

An ambush by the Maoists in the early hours of June 9 in Chhattisgarh killed five personnel of its armed police force. Extremists fled with an AK-47 rifle and a SLR belonging to the dead personnel. In less than 24 hours, on the same day, extremists ambushed security forces travelling in a landmine proof vehicle. As the security forces emerged from the vehicle following an explosion, Maoists opened fire killing ten personnel including seven special police officers. Again, in the early hours of June 11, three personnel belonging to the Central Reserve Police Force were killed after Maoists attacked a security force team undertaking an area domination exercise, again in Chhattisgarh. Maoists decamped with three weapons, bullet-proof jackets and wireless sets of the dead personnel.

The CPI-Maoist, through a press release, claimed that this series of attacks marks the launch of its tactical counter offensive campaign against the government's oppressive measures. However, apart from the fact that two of these three attacks were carried out during night hours, which is a rarity in itself, there was hardly any novelty in the recent attacks. They merely represented a continuation of an unceasing wave of attacks the extremists inflict on the forces.

In mid-2010, two ambushes in Chhattisgarh led to the killing over 100 CRPF personnel. The ferocity of the attacks pushed the forces on the defensive and led to a considerable slow down of the Operation Green Hunt, the multi-state military manoeuvre New Delhi had launched since March 2010 to defeat the Maoists.

Serious brain storming sessions in the ministry of home affairs as well as in CRPF headquarters led to a lot of changes. The CRPF got a new chief, its regional headquarters was shifted from Chhattisgarh to West Bengal, the force claimed it is working at whipping up its own intelligence wing and the new chief spoke of a new strategy being adopted by the force for its future operations.

Coordination between the Centre and the state governments, a problem area in the past operations, was described to have improved. In addition, Chidambaram himself undertook several tours to the CRPF facilities to boost the morale of the forces as well as to take stock of the measures to improve coordination between the state and the central forces. Operation Green Hunt's second phase is said to have begun with better preparations and a well thought out strategy.

However, soaring fatalities among the security forces betray any such claim. Available data reveals that while 158 security forces were killed in three months between April and June 2010, the subsequent period of 11 months (till June 10, 2011) witnessed the killing of another 149 number of unformed personnel. Of these 56 fatalities have occurred since May 2011 alone, when the second phase of Operation Green Hunt apparently commenced.

Just like the three incidents reported between June 9 and 11, each of these killings of security forces have occurred in audacious Maoist raids and ambushes, pre-empting any suggestion that the period of lull has been utilised for quality upgradations in the way security forces plan and execute operations. One does not need experts to surmise that even the small and regular ambushes resulting in comparatively fewer body bags constitute an equally damaging impact on the morale of the forces.

While a big encounter comes as a rude shock and is perhaps result of a critical command and control failure, smaller recurring attacks are manifestations of the deeper and chronic malaise that continue to characterise the counter-Maoist strategies for very long. They nibble into the psyche of the forces and create an aura of invincibility around the Maoists. Indeed they have.

Where is the government going wrong? Well, it is at assessing the actual power behind the Maoists. "Power flows from the barrel of a gun," said Mao Tse Tung, whose ideology and teachings serve as a beacon light for the Maoists. Accordingly, the planners of India's counter-Maoist operations focus on silencing the Maoist gun and win the war. However, Mao also said, "The richest source of power to wage war lies in the masses of the people." This remains oblivious to the planners. The fact that in addition to the geographical advantages and the logistical proficiency, support of the tribal people adds tremendous power to the Maoist movement has been wilfully forgotten by New Delhi.

As a result, the adversary for New Delhi remains only 3,000 strong, which is the estimated cadre strength of the CPI-Maoist's armed wing, the People's Liberation Guerrilla Army. In addition, the outfit is estimated to have a base force of 30,000 fighters. However, the fact that the PLGA is protected and empowered by the well-wishes and sympathies of scores of ordinary unarmed tribal people in each of the states affected by insurgent violence today, is largely ignored by the officials and strategists behind the ongoing operations.

Counter-insurgency manuals, old and new, tell us that the insurgent 'fish' need to be separated from the 'sea' of people to be defeated. Government hopes to achieve this with a surge of developmental efforts. However, an uncommitted bureaucracy perpetuating unbridled corruption creates additional bottlenecks in implementing these schemes.

Moreover, on several occasions security force operations have targeted civilians, burning their houses and committing rapes on women. Civilians have been arrested and harassed after being labelled as Maoists. Recently a senior police officer had to be transferred after vigilante groups carried out attack on a fact finding team that travelled to Chhattisgarh to investigate into allegations of rape and torture by the police personnel. Activists allege that the officer had in fact collaborated with the vigilante groups to orchestrate the attack on the fact finding team. These attempts to score brownie points by the state officials are pushing the already alienated people firmly into the lap of the extremists.

Various state governments, often pursuing divergent plans to take on the Maoists, appear to share one thing in common. They allot a disproportionately wasteful portion of their efforts to pursue the so called bandwagons of the extremists. The more the police suffer defeat against the Maoists, the more vigorously it persecutes civil rights activists and the 'front organisations' of the extremists.

The government's anti-Maoist operation has been allowed to assume a vindictive character targeting all it categorises as its enemies. This is dangerous especially when the state's ability to distinguish between friends and enemies remains grossly limited.

Solutions to the Maoist problem obviously do not lie in fairy lands. Security force operations will have to continue. However, counter-Maoist operations cannot be allowed to degenerate into target practicing. Operations need to be based on ground level intelligence. However, any such intelligence will be impossible to generate till the time civilian population get caught in the fire of the forces.

The security forces often organise football matches, cultural shows and health camps to win over the hearts and minds of the tribals. The state allows educational loans to tribal students and recruits tribal young men into security forces. These are all good endeavours. However, their ability to make amends is grossly limited for such activities are invariably accompanied by brutality and harassment of people. An undisciplined and insufficiently motivated force under incapable commanders is making a mess of the attempts of the government in areas suffering from a serious trust deficit.

In a recent media interview, the police chief in Jharkhand placidly summed up his forces' efforts against the extremists. "Sometimes we lose, sometimes they lose, this goes on," he admitted. The affairs in Jharkhand are mirror images of counter-Maoist operations in other states as well. Obviously, the government in New Delhi has a choice either to be content with the present stalemate or to attempt swinging the balance in its favour. The latter obviously is a much harder option.

Bibhu Prasad Routray is former deputy director in India's National Security Council Secretariat and is currently a visiting fellow at the Centre for Land Warfare Studies, New Delhi and a fellow (counter-insurgency studies) at the Takshashila Institution. He can be reached at bibhuroutray@gmail.com or on Twitter @BibhuRoutray

Is Chidambaram on top of the Maoist issue?
Naxalism: It's time to redeem the promise
Appalling absence of leadership in war on Naxals 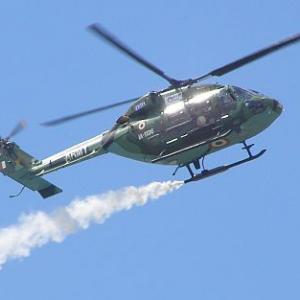