News
Business
Movies
Sports
Cricket
Get Ahead
Money Tips
Shopping
Sign in  |  Create a Rediffmail account
Rediff.com  » News » Pakistan has pulled the trigger on itself

Pakistan has taken too much of a chance with Pulwama - with the wrong government in India, and at the wrong time, says Shekhar Gupta. 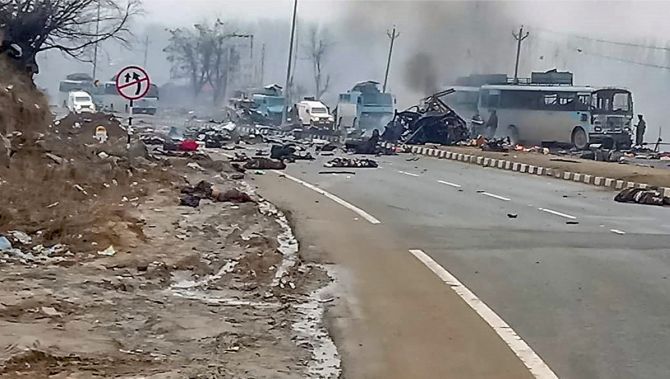 IMAGE: The scene of the February 14, 2019 blast which killed 44 CRPF troopers. Photograph: PTI

Stephen P Cohen, the noted American scholar on South Asia, has a genius description for Pakistani strategic thought. Pakistan, he says, negotiates with the world by holding the gun to its own head: Give me what I want, or I will blow my brains out. You then handle the mess.

Has Pakistan pulled that trigger in Pulwama?

First, get any notion that this was a purely indigenous act of terror out of the way. The suicide terrorist was a radicalised Indian Kashmiri. But count the reasons why this couldn't be an entirely Indian planned and executed operation:

The Jaish-e-Mohammed has claimed responsibility. It is purely a Pakistan-based and ISI-controlled organisation.

While radicalisation and motivation can be local, there is zero evidence that this volume of high explosive (most likely RDX or RDX-mixed) is available with usually amateurish local groups, along with skills to rig the trigger-timer mechanism.

See that last video the bomber recorded. He is reading from a pre-written text from a board placed in front or cards held by someone.

The language isn't so much about Kashmiri grievances or revenge as to instigate Muslims in the rest of India. Babri Masjid and Gujarat are invoked, and 'all our Muslims' exhorted to rise in revolt against 'cow-urine drinkers'.

This is precisely how the Jaish, even more than the Lashkar-e-Tayiba, thinks. Not local Kashmiris.

This action fits perfectly the pattern set by the Jaish in the past. The suicide bombing of the assembly in Srinagar in 2001, the attack on Parliament later in the same year, raids on Pathankot and Gurdaspur have all had the same objective: To somehow take the terror fallout beyond Kashmir.

The Lashkar did so in Mumbai (26/11), too, but much of its energy and manpower is still used in fighting in Kashmir. Under global pressure, it is also being mainstreamed by its GHQ patrons into Pakistani politics.

The Jaish, much smaller but enormously more vicious, resourceful and an ISI favourite, is more selective with 'impact' attacks.

How resourceful the Jaish is we know from the IC-814 hijack. It could get an Indian plane hijacked from Kathmandu and taken to safe harbour in Kandahar to trade hostages for their key leaders jailed in India.

It has been established repeatedly in subsequent research that every step in that hijack -- from facilitation in Kathmandu to negotiations in Kandahar using the Taliban, and then safe 'recovery' of released Jaish chief Masood Azhar and others -- was overseen by the ISI.

To the Pakistani establishment and the ISI, Azhar and the Jaish are much bigger assets than even the Lashkar and Hafiz Saeed. The Jaish is their main force-multiplier. The Chinese also acknowledge it, which is the reason they are shamelessly complicit in protecting him.

That this terrorist was a local Kashmiri is no surprise. In each of its actions so far, including IC-814, Parliament and other attacks, the Jaish has had key participation of Indian Kashmiris.

Afzal Guru, remember, was Indian. Mushtaq Ahmed Zargar, one of the other two jailed terrorists traded for IC-814 passengers, was Kashmiri. We have enough evidence, therefore, to stop wasting time in local, root-cause theories and giving Pakistan any deniability, however implausible.

Why do we raise that question? Has Pakistan finally pulled that trigger into its own head? Because, all the earlier Jaish and Lashkar attacks passed without a publicised retaliation, although we know about some secret 'surgical strikes' in the past.

Between Atal Bihari Vajpayee and Manmohan Singh, India was able to ride out the moments of anger with coercive diplomacy, global pressure on Pakistan, and a strategic mindset that was fundamentally pacifist, and believed in responding no more than proportionately to any provocation.

The Modi government has no such pretence. It holds both Dr Singh and Vajpayee and other governments of the past in contempt for what it sees as their 'pusillanimity'.

Further, having made such noise and political capital from the post-Uri surgical strikes, there is no way it is going to be able to hold fire or restrain itself for long.

Pakistan has it coming. Where, how, when, nobody knows. But it can't be long.

A retaliatory response could come soon. It will also be visible, high-decibel and wrapped in claims of victorious retribution.

India is in the early days of its most vicious election campaign yet. Narendra Damodardas Modi will not go seeking a second term with the taint of Pulwama.

It will then be for Pakistan to decide whether to leave it there or respond to its own popular compulsions to begin a retaliatory cycle. It could, besides whatever happens militarily, end this tenure of Imran Khan.

History tells us no Pakistani leader can go to war, big or small, with India and survive. Ayub Khan (1965), Yahya Khan (1971), Nawaz Sharif (Kargil, 1999) tell us that. Three instances, as we say in journalism, is a straight line.

There can't be much argument over the essential reality of Pakistan: That Imran will not have a decisive say in what happens next. He might ultimately pay for the army/ISI bullheadedness as Nawaz Sharif did for Kargil, and he will need enormous skill and luck not to become that scapegoat.

No elected prime minister has the final word on such issues in Pakistan and Imran, if anything, is among the weakest in some time.

The call to engage in an immediate escalating cycle or not will be his army's. Could he even counsel them against it? We can't be sure. They will decide whether to blow their brains out or not. He's a loser either way.

Besides the difference between Mr Modi and his predecessors, there are two other important distinctions now. One, that it is a world radically different from what we left behind in 2008 (26/11) or 2001-2002 (J&K assembly and Parliament attacks).

Then, top American and European leaders would come flying in, heads of States would make phone calls, Russia, China would all weigh in to calm things down, calm and reassure Indian public opinion by expressing solidarity with us and condemning Pakistan.

That world doesn't exist anymore. It unravelled the day Donald J Trump was elected US president and kept his promise of making America great again by withdrawing and leaving the rest of the world to its own devices.

If stuff hits the fan in the subcontinent now, he may not even bother tweeting restraint immediately. The modern world's oldest antagonists can set their region on fire now, without the comfort of the American/global fire truck waiting at our door.

This has also diminished, if not eliminated, the subcontinent's old leverage with the world: Come and stop us or we will nuke each other.

Mr Trump may be the one we blame but there is generally a wariness about the region holding the world to blackmail after claiming to be responsible nuclear weapons powers.

Of course, it applies much more to Pakistan than India.

Because, in the subcontinent, the nukes are the preferred weapon of the weaker power, the likely loser.

Beginning with V P Singh's spineless year in 1990, Pakistan has used the nuclear deterrent entirely to its own advantage, keeping its provocations within that threshold, ruling out any sizeable retaliation from India.

Obsession with tactical nukes tells us that the Pakistanis have probably not reviewed that position. If they haven't, they will get a disastrous surprise.

This Indian establishment no longer sees nukes as only one side's deterrence. If you take chances with it, and that too in election weeks, you might as well have pulled that trigger.