News
Business
Movies
Sports
Cricket
Get Ahead
Money Tips
Shopping
Sign in  |  Create a Rediffmail account
Rediff.com  » News » Only Pinarayi Vijayan can save the CPI-M from suicide

Only Pinarayi Vijayan can save the CPI-M from suicide

'It will be a ghastly mistake for the CPI-M to face the 2019 poll on its own.'
'At best, it can hope to split non-BJP votes in some pockets, but the humiliating rout will spell its doom,' warns M K Bhadrakumar. 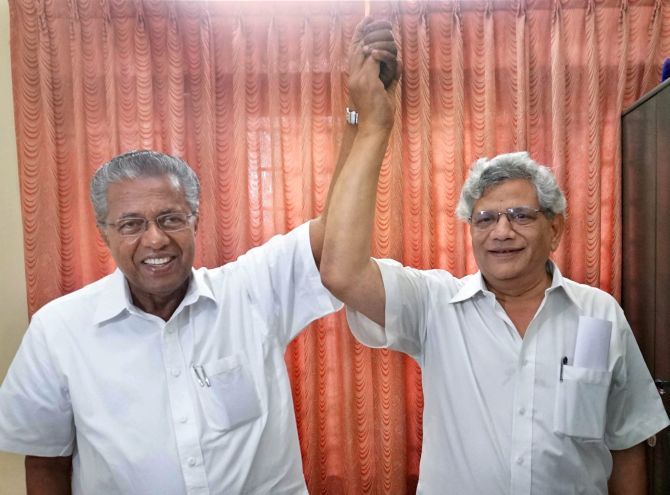 The Congress party's reaction to the convulsions within the Communist Party of India-Marxist as regards the latter's tactical line in the approach to the 2019 general election has been restrained.

Party spokesman Abhishek Singhvi hinted that the Congress hopes that better sense will prevail at the CPI-M's party congress in April in Hyderabad.

Clearly, it is Pinarayi Vijayan ('Kerala faction') who is blocking a CPI-M-Congress alliance.

Momentary considerations are at work. The CPI-M is leading the government in Kerala and is averse to sharing the heights. Period.

But the CPI-M's practice of socialism is fundamentally not different from the economic policies of the Congress and aside the CPI-M's dalliance with the cult of violence, the Congress can be its soul mate.

Contrived arguments become necessary to differentiate the party. Things have reached an absurd point when the cadres need to be motivated by hailing North Korea's Kim Jong-un as the Che Guevara of our times.

The main challenge lies somewhere else. The Congress is the only party in Kerala that measures up to the CPI-M in its popular base, organisational capability and credible leadership.

An alliance with the Congress will require a big adjustment on the CPI-M's part to consensus politics. Therein lies a contradiction.

Consensus politics and the CPI-M's over-centralised style of functioning at the state level grate against each other.

This will not pose a problem for the Congress, which is, after all, a rainbow coalition. On the contrary, the CPI-M in Kerala may simply unravel without the command-style functioning.

A leap of faith is needed. It is necessary for the party to anticipate a 'post-Pinarayi Vijayan' phase.

All good things in life come to an end at some point. The CPI-M needs a medium and long-term vision. And the transition to the future is best undertaken when Pinarayi Vijayan remains the great helmsman to navigate it.

The masterly way he handles the equations with the Modi government while at the same time violently dealing with Modi's mentors or foot soldiers in Kerala testifies to a rare combination of realism and grit.

Bourgeois politics is about taking power through democratic means. The prospect of seat sharing with the Congress may cause heartburn to the CPI-M leadership in Kerala as it involves making sacrifices. But this must be seen in the national context.

The clutch of seats that CPI-M may have to 'surrender' in Kerala will be more than made up by what it could gain in the Indian hinterland where the party is a virtual zero today.

On the other hand, the spectre that is haunting the CPI-M is that in the 2019 poll, it may draw a blank in West Bengal (which sends 42 MPs to the Lok Sabha) in a four-way contest.

The BJP is already forcing the CPI-M onto the back foot in Tripura where a Bengal-like erosion and an ensuing catastrophic fall cannot be ruled out.

By next year, the CPI-M will not have a single Rajya Sabha MP from West Bengal.

Sitaram Yechury could have been a one-man army in Parliament to hold the red flag high. But that is also not to be.

Then, there is the 'big picture'.

Today, the CPI-M's attraction for the Congress is that it still retains a larger-than-life presence in Indian politics.

A Congress-Left alliance could galvanise the political process leading to a broad-based Opposition front.

But the Congress is not without a Plan B, as the Gujarat election showed. Which is not the case with the CPI-M.

It will be a ghastly mistake for the CPI-M to face the 2019 poll on its own steam. At best, it can hope to split the non-BJP votes in some pockets, but the humiliating rout will spell its doom.

Make no mistake, the BJP and RSS will leave no stone unturned to retain power.

For the RSS, the Hindutva agenda is a work in progress and the BJP must somehow retain power beyond 2019, which is imperative to ensure that its programme to transform India as a 'Hindu rashtra' becomes irreversible.

And if the RSS succeeds in its mission, all these shenanigans by the CPI-M's Kerala faction within the party's central committee will look foolish.

Sadly, I am reminded of the famous lines from the poem by the German Lutheran pastor Martin Niemoller on the cowardice of German intellectuals in the face of the rising tide of fascism in Germany under Hitler:

Like all good Communists with a profound sense of history, Pinarayi Vijayan should seriously ponder over his legacy as a Communist.

The CPI-M is at the crossroads and only he can rescue the party from a suicidal path. 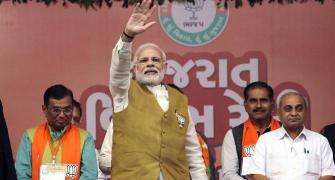 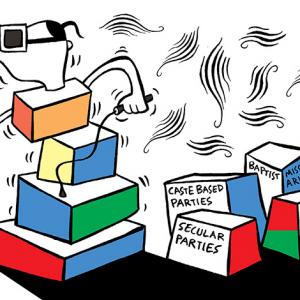